Due to some other projects, the never ending crush of time (and some laziness), I'm once again leaving some stuff in the queue, so Glee, Community and Parks and Rec reviews will have to yet once again. In the meantime, here's what I've got for this week.

Bob's Burgers: It Snakes a Village 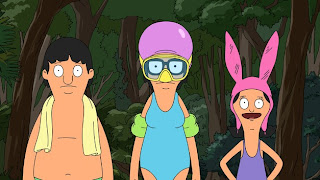 The thing I loved the most about this episode was the way Bob was not only not grossed out by the elderly swingers, but actually amused by them. It was a nice, subtle subversion of how you'd normally expect the character to act. Everything else with the kids was, of course, fantastic, especially the inconsistent dimensions of the "forest" and Gene's fear of snakes.

Other Thoughts
It appears that the family car left the map around New Jersey, which is, I believe, the first time their state has been specified.

Bob: Wow, the red pairs nicely with the white. 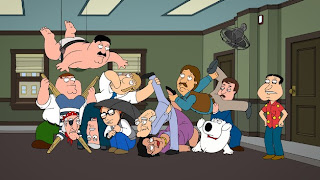 Maybe I'm just a sucker for 12 Angry Men parodies (which is pretty much a TV trope all its own at this point), but I really enjoyed this episode. In particular, I think it worked better for being more focused; aside from the usual cutaway gags, the bulk of the story unfolded within the jury room (just like the play), with no B-plots to distract from things.

I also laughed way harder at the "Peter fishing his phone out of the toilet" cutaway than I should have. It was all in the delivery.

Nice to see H. Jon Benjamin's Carl back. His offhand gags about being illiterate were pretty great. 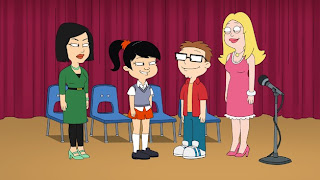 This was an episode that hit all kinds of familiar sitcom beats: the competitive mothers pitting their children against each other, despite the children liking one another, a parent suddenly turning into a helicopter parent to get their kid into a good college, spelling bees in general.  Per usual, all of this was elevated by the show's manic energy, which had all the typical plots unfold on a completely different level, featuring glass cages and gravity-defying sword fights.

Other Thoughts
Meanwhile, in the B-Plot, Stan and Roger try to help Haley work through the loss of Jeff for arguably the most insignificant of reasons: they need her to be the line judge for their badminton game. This plot largely worked for the way it effortlessly pulled Stan into Roger's petty, make-a-big-deal-out-of-little-things world.

Kudos to the show for acknowledging Jeff's departure.

Steve's hyper realistic masks, as well as the ongoing "spelling out titles to Tyler Perry films" bit at the end just about killed me.


Once Upon a Time: Welcome To Storybrooke 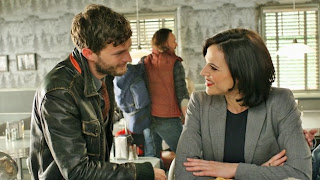 That's two episode in a row that have been better than average. It was a lot of fun to go back to the early days of Storybrooke and see everyone in their original cursed states again (without having to go back and watch some of the more boring season one episodes), even moreso that it tied directly into the events in the present day, in terms of plot and not just thematically. While present day Regina continues to move in circles in terms of character development (it appears we're back to her avoiding magic in an effort to win over Henry), the discovery that Greg Mendell isn't in Storybrooke on purpose, along with Snow's continued efforts to grapple with what she did to Cor,a laid some decent groundwork for future episodes.

Other Thoughts
The scene between Snow and Regina at the end was a highlight.

The guy who played Kurt was the main antagonist on Alphas. I'm sad it's not coming back...

How much better would this show be if the kid playing Owen was playing Henry?

That said, Henry's idea to blow up the magic-spewing waterfall with dynamite struck just the right chord of "dumb little kid" idea and "just crazy enough to work" idea.

I'm still a little confused as to how time worked in Storybrooke during the curse: was every day literally like Groundhogs Day, where everyone except Regina repeated the same things? Or was the repetition just supposed to represent Regina's mounting displeasure with everyone's forced dispositions (Ruby, while repeating the same lines, wore different clothing in each scene)? If its the former, at least until Emma arrived in the pilot, how did time pass for Kurt and Owen? How was the mechanic able to fix their car if he was reliving the same day over and over again? For that matter, how did Henry experience things once he was brought to Storybrooke, if everyone except him and his mother were reliving the same day? Was he taught the same lesson in school by Mary Margaret every day?

Or is the answer to all those questions just "magic"?

Similarly, was 1983 Gold just playing dumb with Regina? Because I'm pretty sure it was revealed that he had known the truth all along. Or will it be revealed that sometime between 1983 and the present Regina somehow altered the spell, to give people more free will, and in the process, restored Gold's memory?

As soon as it was revealed that Kurt and Owen were in 1983, I turned to Mrs. Teebore and suggest that the kid is the guy who crashed into the sign and saw Gold doing magic. She asked why I thought so, and I told her it was because this is a show where everyone is someone else.


How I Met Your Mother: The Time Travelers 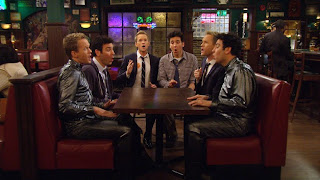 This episode started off weird, with the question of how exactly Ted was interacting with future versions of himself and Barney, and then took a turn for the depressing, as we learned the truth: that Ted was spending a Saturday night alone, and realizing the rut his life was in. I wasn't quite sure what to make of it at first, but in the end I think it was a pretty strong episode (even though I'm still unclear about some of the time mechanics; see below). This show has certainly married the mirth and the melancholy in one episode before, and its ability to play around with the perception of time is an old standby (this wasn't the first time were told specific events were unfolding at time we later learned they weren't). Plus, there was a definite feeling like the show as a whole is building to something, beyond just the usual inane teases about the Mother. 45 days to Robin and Barney's wedding, and despite the additional season pick-up, it really does seem like we're heading towards Ted meeting the Mother.

Other Thoughts
As sad as the reveal of Ted's solitude was, Dr. Bitz made a good point: Ted needs more friends. Was that really the first time all four of his friends were too busy to hang out with him, even for something as significant as Robots vs. Wrestlers? Or just the first time the gang all bailed because of serious relationship stuff (kids/wedding planning)?

Okay, so I'm still unclear as to how this episode unfolded. Was what we watched, in terms of the future characters, all in Ted's head at the time he was sitting there, or was he adding them for the benefit of his kids to characterize his issues at the time? Or conversely, were they just their for OUR benefit? Was he remembering the story of the dance off the night he was alone, or was that just something meant to throw us off? Then there was the whole Ted-getting-punched-by-the-Mother's-boyfriend thing, which only happened, I think, in the alternate timeline Ted was describing to us/his kids, which makes it seem like an odd thing to include. Also, was Coat Check Girl there the night Ted was alone at the bar, or the night of the dance off?

Holy crap, the Robin Scherbatsky sounds like diabetes in a cup.

Not only was the "Longest Time" end tag tons of fun, it was also a pretty striking technical achievement.

Twenty Years From Now Ted: When I get married, sure, that’ll be the greatest night of my life, but who knows when that will happen?

Carl: I will name every drink in this bar after you if you tell me my last name
Lily: Well, that’s just confusing, how will you be able to tell what people are trying to order? 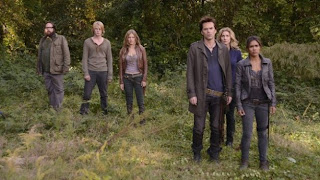 To paraphrase Dr. Bitz, if we ever needed more proof that Danny was never anything more than a living MacGuffin, we now have the climax of this episode. Season 1.5 of Revolution, at least in this first episode, isn't a whole lot different than the ten episodes which preceded it: entertaining but relatively shallow genre TV. But the death of Danny eliminates one of the show's more annoying and pointless characters, while keeping Rachel around to interact with the main cast suggests the show is preparing to be less cagey with some of its mysteries. This show may never become very deep (not that it has to be to be enjoyable), but this episode is at least moving things in a direction that suggests it will remain entertaining.

Other Thoughts
The title of the episode obviously alludes to Stephen King's epic post-apocalypse novel, alluded to by the show in previous episodes, as does Rachel's old associate Randall Flynn (Randall Flagg was the bad guy in The Stand).

Elizabeth Mitchell is back to playing the Juliet role of answering questions with vague statements that really mean "I can't answer that now because it's not plot-convenient".

Danny's death was genuinely surprising, mainly because it displayed a level of self-awareness (in terms of the fact that nobody liked Danny and he was less a character than a plot device) that is unusual in TV producers. It got me thinking about what other TV shows could benefit from a willingness to just kill off its annoying, pointless characters (like Declan on Revenge) almost immediately after they've served their narrative purpose.

Both sets of characters, Miles and Rachel as well as Charlie and everyone, seemed to cover a lot of distance in this episode (ie Philadelphia to Annapolis). There wasn't anything to suggest it didn't take them several days to do it, but I was still surprised by how quickly the episode sped through their travel time.

I'm excited to learn more about Randall and his role in the blackout (as well as his goals in the present day), but I'm kinda bummed he's apparently teaming up with Monroe. I liked the idea of him being a third faction, another antagonist for the heroes but someone who isn't allied with Monroe either. Oh well.

Apparently NBC aired a four part miniseries online called Enemy of the State that dealt with the fallout from Miles' first attempt to kill Monroe. I just heard about it this week, so I haven't seen it, but I might have to check it out.
Newer Post Older Post Home
Posted by Austin Gorton at 10:30 AM