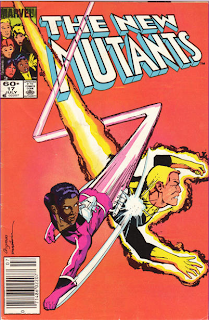 In a Nutshell
Cannonball and Jetstream duel for the New Mutants' freedom.

Plot
As the White Queen leads the Hellions in an analysis of their confrontation with Xavier's students, the defeated New Mutants find themselves imprisoned along with Kitty in a room with a power inhibitor. Meanwhile, in Limbo, Dani, with the help of S'ym, tends to an exhausted Illyana. When she awakens, she casts a healing spell on herself, then teleports with Dani back to the Massachusetts Academy. When they arrive, they discover their teammates dressed like the Hellions and interacting with them as though they're all old friends. Dani and Illyana quickly realize they've arrived at the school a year after their initial encounter with the Hellions, and that the White Queen has succeeded in brainwashing their teammates. Illyana teleports them again, and they arrive a week after their fight with the Hellions. Certain she won't be able to do any better, Dani and Illyana steal into the New Mutants' room to rouse them. But before they can escape, they are confronted by the Hellions. 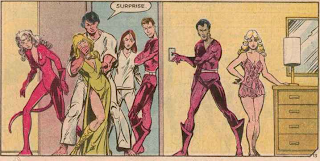 Some of the Hellions, all of whom came to the academy by choice, are unhappy with the idea of the New Mutants being forced to join them, so they propose a duel: one New Mutant versus one Hellion. If the New Mutant wins, they all get to leave, otherwise, they will all stay willingly. Dani reluctantly accepts. Inside the Hellion's Combat Room, Cannonball and Jetstream blast off with the goal of outlasting their opponent. Sam eventually manages to knock Jetstream to the ground, winning the duel, but the White Queen and Sebastian Shaw suddenly arrive. Refusing to honor the Hellions agreement, Shaw and the White Queen are attacked by the New Mutants. Kitty is able to sneak away and trigger an explosion in the Combat Room's equipment, creating enough of a distraction for Illyana to teleport the New Mutants away. Arriving back at the mansion, Dani suddenly has a vision of the Demon Bear, who declares that he will soon come for her as he once did her parents.

Firsts and Other Notables
This is the last issue featuring the Buscema/Mandrake team on art, with Bill Seinkiewicz announced on the final page as the book's new artist. Also, Ann Nocenti officially takes over as the book's editor with this issue.

When Dani and Illyana first teleport back to the Massachusetts Academy and arrive a year into the future, they see the New Mutants dressed as and acting chummy with the Hellions; this is possibly a setup for a story, a little over a year (publishing time) from now, which will find the New Mutants sent to study at the Massachusetts Academy for an extended period of time, though the details between this future and that one are not consistent (Kitty, for example, is missing in the later story), meaning this is likely just an alternate future averted by Dani and Illyana's second rescue attempt.

Dani and Illyana's second attempt to return to the academy lands them at the school one week after the events of last issue, which helpfully covers the week, in story-time, that the X-Men were on Battleworld for Secret Wars.

A Work in Progress
Proving what a jerk he is right from the get-go, Empath refers to his teammate Jestream as "Arab". 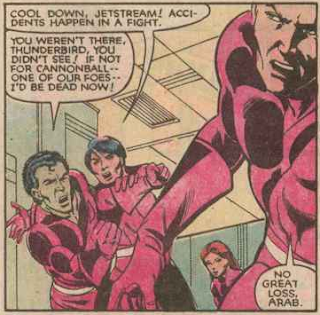 In contrast with Rahne, who struggles with her desire to remain in her lupine form, it's made clear Catseye much prefers remaining a cat. 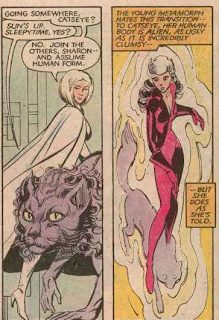 Thunderbird mentions wanting revenge on the X-Men for the death of his brother John, but it still hasn't been made explicit that he's the brother of the Thunderbird who died in issue #95.

Setting up the story which will begin next issue, the Demon Bear which killed Dani's parents is referenced several times in this issue. 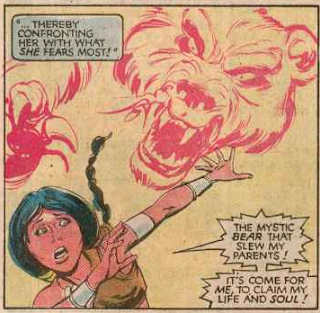 The Hellions training room, the Combat Room, resembles the Danger Room, and it's said it was created in part using technology and know-how stolen from the X-Men during the time when the Hellfire Club had the mansion bugged (circa the "Dark Phoenix Saga"); however, as the Shi'ar enhancements that allow for the Danger Room's holographic capabilities were installed later, the Hellions' Combat Room lacks that enhanced functionality, something which Sam notes during his duel with Jetstream.

As promised in X-Men #182, Shaw shows up at the Massachusetts Academy, and the New Mutants are forced to fight him and the White Queen briefly before they're able to teleport away. 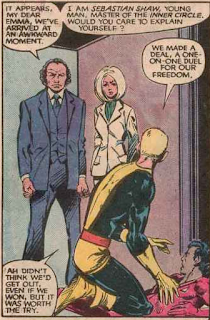 I Love the 80s
I probably need to get my mind out of the gutter, but I couldn't help chuckling at the image of Kitty using her physical therapy skills, learned in dance class, to give Roberto's injured back a massage. 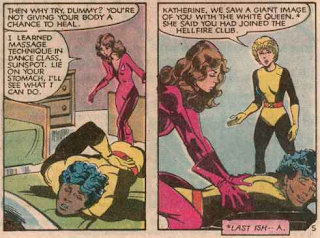 After fleeing to Limbo, Illyana and Dani are (of course) dressed (by S'ym) in skimpy/revealing attire. 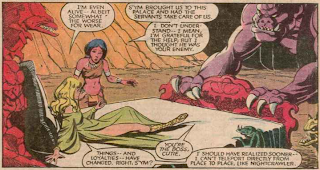 Young Love
Tarot, whilst thinking of the New Mutants, drops the "lovers" tarot card, kicking off a minor subplot that emerges whenever the New Mutants and Hellions meet that never really gets resolved.

My Hero, Thomas Magnum
Roberto urges Sam to use the "Maneuver 7 Magnum variation" against Jetstream, which appears to involve him grabbing a gymnastics ring, then swinging around and blasting into his opponent, which seems oddly specific/uncomplicated. 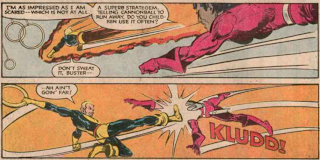 Ann Nocenti on Sal Buscema's departure
"I knew you couldn't have an old-fashioned artist on something geared to bring in new readers ... Probably the hardest call I ever made at Marvel was to Sal Buscema, to say, bluntly - too bluntly - 'I am taking you off this book.' He asked why, and I said, 'You're old-fashioned. This needs to be new.' And he was really mad, then upset. Then he turned around, and in the next issue of The Incredible Hulk...it was fucking magnificent. It was like Sal saying, 'you want to see what I can do?' He just pulled all the guns out. "

Teebore's Take
And with that, we close out the three part "rescue Kitty/tussle with the Hellions" arc (and, with the imminent arrival of Bill Sienkiewicz next issue, we also close out the first "era" of the title). In this issue, Claremont continues to depict the Hellions less as super-villains and more as rivals for the New Mutants, smartly peppering the issue with little bits of characterization that help the Hellions feel like more than just generic villainous counterparts: Empath is a scheming asshat (and the most overtly villainous of them all), Thunderbird has a strong sense of honor, Catseye prefers life in her animal form, Tarot may be crushing on one of the New Mutants, etc. Furthermore, this initial confrontation between the two schools ends not with a super powered throwdown between the teams, but a test of skill between Cannonball and Jetstream, with both sides agreeing to honor the results. Only the intervention of Shaw and the White Queen, true super villains, leads to the New Mutants having to (barely) fight their way out of the Massachusetts Academy. Not only does this maintain the "students first" aesthetic, but it also makes it easier to bring back the Hellions as antagonists while suggesting the possibility of deeper interactions between members of the two teams in the future.

Next Issue
Kitty returns to the mansion and deals with the fallout from Secret Wars in Uncanny X-Men #183, while New Mutants #18 kicks off one of the books most acclaimed stories as we welcome aboard new series artist Bill Seinkiewicz.
Newer Post Older Post Home
Posted by Austin Gorton at 10:00 AM