February sweeps ended this week, and I'm not gonna lie: I'm looking forward to most shows taking a month off, just to get caught back up on stuff (Glee is taking about six weeks off, so I'll use that time to catch up on it next week, and I still haven't watched this week's Top Chef finale). Anyways, here's what I've got this week. 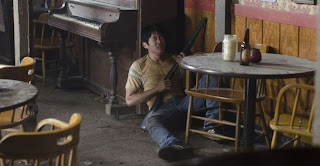 I actually did watch this two week's ago, but as we learned from last week's post, I just plum forgot about it. Which is odd, because it was a very solid episode, and it was good to have an episode that improved on the premiere instead of being a step back. Thankfully, the bar siege began and ended within the episode and didn't drag on too long, and the closing scene, in which Lori finally lays it all on the table for Rick regarding Shane, was fantastic, especially as it's been about about six episodes coming (though if Lori really wanted to rile Rick up, she should have mentioned the attempted rape; I'm not quite sure why she didn't). Speaking of Shane, for once I didn't disagree with one of his dickish moves, as lying to get Lori back to the farm was the smart play, since she had no business being out there in the first place. All in all, the energy level barely dipped from the previous episode, and that's a good sign for the rest of the season. 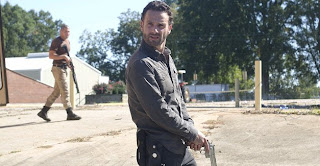 Another good episode that benefited from a focus on Rick and Shane, the execution of another tense action sequence, and the continued examination of what "doing the right thing" means in this world by throwing one hard choice after another at the characters (instead of, you know, just having them talk about it). It started with a fantastic (though oddly shot) scene between Rick and Shane in which Rick finally called Shane on his BS, which then escalated into a knockdown, drag-out fight between the two, and finally, a desperate escape from a horde of walkers. My only complaint with this portion of the episode, really, is that at the end, I would have liked Rick to make the subtext inherent to his going back for Shane text. Usually, I appreciate shows leaving it to the audience to make these connections, but in this case, I don't think Shane really realized that if Rick behaved the way Shane is always advocating he should behave, Shane would be dead right now. So it's one of those rare cases where the audience catches the subtext, but the character doesn't, and he needs to.

There was also that whole business with Suicide Girl, and while it led to an awesome bitch off between Andrea and Lori (in which I thought both were being stupid but since I like neither character, I enjoyed each of them ripping into the other) but was otherwise perfunctory, mainly because we have no reason to care about this girl (what's her name? Beth?), nor has the show tried to give us any, beyond the fact that Maggie cares about her, which only concerns us because Glenn cares about Maggie, and Glenn is character we like (and that's an awful lot of "Six Degress of Separation" for a character to go through in order to generate audience sympathy).

Other Thoughts
My only other problem with this episode, which isn't this episode's fault, is that judging by the sneak peak to next week's ep, Shane has learned nothing from this experience, making the whole thing retroactively feel like a waste of time, character-wise (even if the action was nice).

I had to stop and double check that I hadn't skipped an episode (I've done it before) but as someone who wants more narrative urgency from this show, I greatly appreciated that we skipped a week ahead, past Randall's recovery, and dove right into the meat of the episode.

So what do you make of the lone walker Shane observed on the way out of and back to the farm? A figment of his imagination? A sign he's cracking up? A symbol of the fact that's he still in it for himself?

How about that discussion about the two cops who didn't look like they had any bites? Is that an indication that the zombie virus is mutating/going airborne, or something else?

I don't like Andrea much, but her calling out the fact that being the main character's wife has its fringe benefits was kind of funny in a meta way.

Also, was it just me, or is Lori operating under some hilariously outdated and sexist notions of labor division? I get the idea that everyone needs to pull their own weight, but it seems like she thinks Andrea should be cooking and washing just because she's a girl. Does Lori harass Dale or Glenn or Black Guy or Daryl for not pitching in? Andrea is performing a necessary function, and there's no reason one of the guys couldn't be doing a portion of the housework while Andrea keeps watch.

I get that it's TV and you have to let some of these things go, but jeez, what with all the open wounds he received fighting Shane and all the zombie blood splattered by blasting through skulls at close range with a .357 Magnum, you'd think Rick would be all zombified now.


How I Met Your Mother: Karma 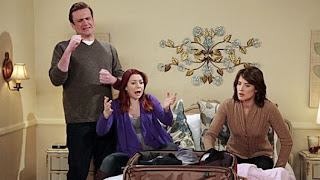 While Barney's ignorance and Ted's general ineffectiveness at everything he tried to do to get Robin out of his head were generally pretty funny and solid hooks to hang a story on, and the episode as a whole did a nice job of handling the fallout from last week's episode, the whole "Robin doesn't like the 'burbs, neither do Marshall and Lily" plot was disappointing. City folk not being able to handle suburban life is pretty cliche at this point, especially for shows that make a big deal out of their city setting like this one does, and this particular iteration did little to avoid that cliche (and I'm not saying that just because I've lived my entire life in the 'burbs).

It makes narrative sense for Marshall and Lily to be back in the city, and Ted handing over his apartment to them was a sweet moment (though seriously, how many homes have those two just been given now? They received a house and an apartment free of charge this season, and presumably still have their place in Dowisetrepla), but it would have been better if their motivation for moving back into the city was born of something more than the usual "we love the city/can't handle the 'burbs" schtick (especially when Marshall himself has expressed a fondness for the suburbs before, back when Ted almost moved in with Stella in Jersey).

Dr. Bitz pointed out that Robin, of all people, should be used to the suburbs, having grown up in the wilds of Canada.

Dr. Bitz also pointed out that TV strip clubs are lame. He is correct.

Seriously, aren't Lily and Marshall sick of moving their stuff around by now?

Any guesses on where Ted might end up now? A generic new apartment set? Living with Barney? I joked that he'd probably just find a place with Robin.

I didn't talk about it much, but the Quinn/Barney plot was pretty good. The two actors have more chemistry together than Robin and Kal Penn ever had, and even though I think the storyline is, in general, a dead-end retread of a story they've already done, I don't mind her sticking around for awhile.

Robin: Also, Diary, I think writing in you is stupid, but you were a gift from Lily, and she’s watching me right now.

Ted: I like smoking meat, but I have a new passion: wood.
Robin: You hear these things that come out of your mouth?

Barney: Well, at my job we don’t rip out people’s hearts for money. My company briefly backed a lab in North Korea that did, but we sold it. 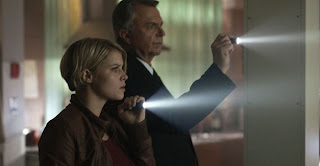 We're back in "childhood trauma triggers criminal MO" territory, but it's been awhile since we had one of those, and this episodes continues the recent string of balancing mythology with case of the week material. In the past, we got a compelling story with a few surprises (maybe I shouldn't have been surprised, but I figured McKee was going to kill the librarian, and the Ginny reveal was also a surprise, as I figured she'd been scarred by the jocks and that motivated McKee's attacks on bullies). In the present, the return of Jack Sylvane offered up some more hints at the larger mythology, which piqued Madsen's interest in the bigger picture even more. And while McKee's present day rampage was pretty basic procedural stuff, it managed to address most of my concerns with it (like how he was able to get those jobs so fast). While none of the episodes have yet to be game changers in their excellence, the 'Traz has put together a nice little string of episodes with consistent quality and a nice balance between the show's two styles.

Other Thoughts
The treatments used to attempt to revive Lucy were much less spectacular than I was expecting, but the idea that she's staying in a coma because dream world is better than the real world is intriguing.

I liked the bit about Hauser deleting all the instances of the YouTube video; probably not possible, but I appreciate that the show made the effort to remind us that Hauser and company are trying to keep the whole "time traveling Alcatraz inmates" thing a secret.

Similarly, I appreciated the scene where McKee seemed confused by the idea of watching something on a phone. While I understand watching people ask "so what's this internet thing all about?" doesn't make for the most dynamic of TV, I wouldn't mind more scenes like that.

Also along those lines, I'm still curious what leads these criminals to just pick up their criminal habits, no questions asked. I get that in many cases its a psychosis, but I'd think the shock of waking up in the future would manifest itself in some way other than going about business as usual.

So the 63ers don't dream anymore. A little poetic touch, or something more? And how does it tie in to Lucy, who we've seen in the past, and is currently too enraptured by her dreams to regain consciousness?
Newer Post Older Post Home
Posted by Austin Gorton at 8:00 AM