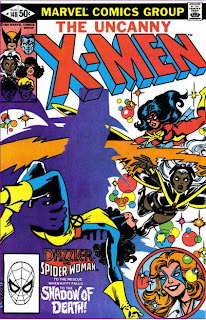 In a Nutshell
The ladies go out for a night on the town and meet Caliban.

Plot
In the Bermuda Triangle, Cyclops and Lee Forrester explore the island city which sprang up overnight, which appears to be a remnant of an ancient civilization, and to have been underwater for a long time. Meanwhile, on the grounds of the mansion, Wolverine and Nightcrawler spar with one another while Angel argues with Professor X and Storm over Wolverine's involvement with the team, believing him to be a dangerous psycho. Unwilling to be on the same team as him, Angel quits and flies off. In the hanger, Banshee and Colossus are working on the Blackbird before Banshee is called back to the mansion, where he meets his daughter Theresa for the first time. That night, Storm and Kitty, joined by Stevie Hunter and the visiting Spider-Woman, attend a Dazzler show at a nightclub downtown.

Drawn there by the presence of the mutants, the sewer dwelling mutant Caliban sneaks into the nightclub and attacks two security guards. Kitty investigates but is captured by Caliban, who quickly tries to leave the building with her. As Dazzler calms the crowd, Storm and Spider-Woman pursue Caliban and stop him from returning to the tunnels beneath the city with Kitty. Caliban explains that he was tired of being alone and meant no harm. Storm attempts to offer him a home at the mansion, but as the police arrive, he slips away. Back in the Bermuda Triangle, Cyclops and Lee discover they are not alone in the island city: it is inhabited by none other than Magneto.

Firsts and Other Notables
This is the first appearance of Caliban, a mutant who lives in the tunnels beneath New York City with the ability to sense other mutants. He will eventually join up with the underground mutant community of Morlocks (once Claremont gets around to creating them), and will become a recurring supporting character and occasional villain throughout the X-Men universe, being featured at different times in X-Men as well as X-Factor and X-Force. 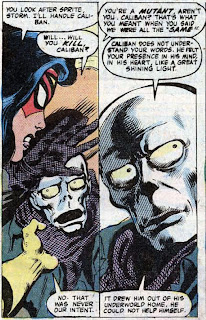 Caliban was originally conceived by Claremont and Byrne during their run as a potential member for a second team of X-Men in training (along with Kitty and Willie Evans, a character from an older Fantastic Four story). According to John Byrne, Jim Shooter eventually scuttled the idea of a training team, feeling it was too close to the Legion of Substitute Heroes (the training team for the Legion of Super-Heroes at DC), but not before Kitty had already been introduced. So Kitty simply joined the team, and after Byrne left, Claremont went ahead and introduced Caliban, but never made him a part of the team. Of course, Claremont eventually returned to the idea of a team of young X-Men for New Mutants, the first X-Men spin-off book.

Angel, somewhat-abruptly fed up with Wolverine's dangerous tendencies, quits the team, once again voiding the X-Men roster of any original team members, though as before, that condition will not last long.

Following from Spider-Woman #37-38, Banshee meets Siryn for the first time, and learns she is his daughter. As mentioned in the comments to the Spider-Woman post, Siryn isn't seen again for quite some time. 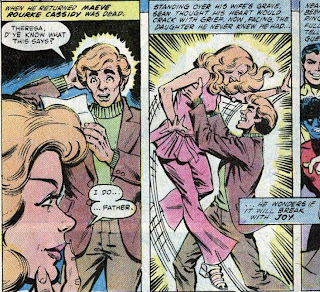 The last page of the book reveals Magneto as the inhabitant of the mysterious city atop the mysterious island in the Bermuda Triangle, marking his first appearance in the book since his brief scene in issue #125, and setting up the first Magneto story since the classic Claremont/Byrne two-parter in issues #112-113.

After bringing in the X-Men to guest star in her book, Claremont follows up by having Spider-Woman visit the X-Men this issue. Dazzler, fresh off the debut of her own solo title, also makes a guest appearance (her appearance in this issue falls between issues #5 and #6 of her title).

Janice Chang fills in for Tom Orzechowski as letterer, and the difference is noticeable.

On a personal note, this is the issue of X-Men that was on the stands the month I was born. I apologize if that makes you feel exceptionally old or exceptionally young.

A Work in Progress
Colossus' sister Illyana, staying at the mansion for the time being, wonders if she'll turn to steel when she grows up. 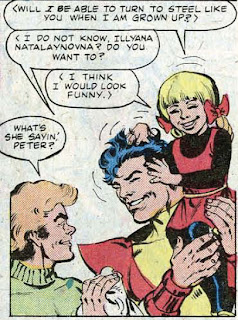 Moira admits that she finds herself resentful of Siryn because Moira could never give Sean a child herself, for fear the child would be like Proteus, while Storm admits she is jealous of Stevie Hunter's relationship with Kitty. 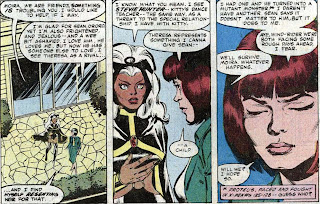 At the nightclub, Kitty carries her X-Men costume in a secret compartment in her purse.

Kitty also manages to walk on air for a significant distance.

As a result of her encounter with Caliban in this issue, Kitty realizes she's been judging Nightcrawler solely by his appearance, and resolves to make amends, effectively putting an end to the "Kitty is creeped out by Nightcrawler" subplot.

I Love the 80s
Well, the Disco Dazzler is back, and the time away hasn't updated her act any. 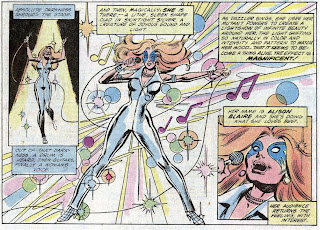 Kitty asks Jessica Drew a litany of questions about her work as a private investigator, and gets reprimanded by Storm and Stevie, because apparently kids those days didn't ask questions of their elders. 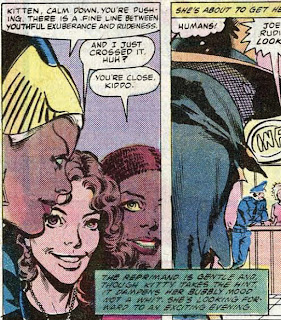 Claremontisms
Though not quite a trope on the level of some others, the idea of a "ladies night" (and the ensuing superhero shenanigans that ensue) is one Claremont will return to on occasion.

Artistic Achievements
The final page reveal of Magneto continues a long tradition of last-page Magneto reveals (future X-Men artist and current DC grand poobah Jim Lee collects the original art of those pages), and is perhaps the best piece of art yet in Cockrum's second run. 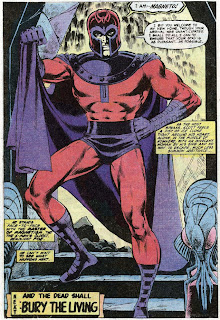 Young Love
Stranded on a mysterious island that randomly rose from the sea, without food or water, Lee decides it's as good a time as any to get frisky. 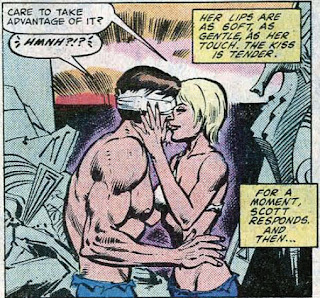 When Scott rejects her, she gets pissy and storms off, leaving a blind Scott to briefly fend for himself. 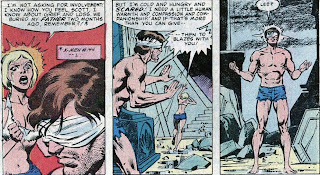 The Awesome and Terrible Power of Cyclops
Which, of course, leads to more fist-clenching angst! 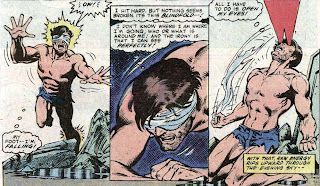 The Best There Is At What He Does
Though Wolverine's affinity for Japan was established in the Moses Magnum story during the Claremont/Byrne run, here he specifically references a "ninja trick" he learned there, the first time Wolverine is directly associated with ninjas. 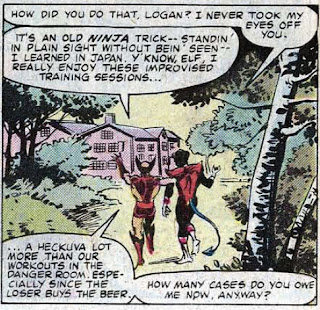 Dave Cockrum on issue #148
"I hated [it] so much it took me six weeks to draw...For one thing, it had Dazzler and the disco in it and I hate Dazzler and I hate discos, and for another thing - well, that's the major thing."

Chris Claremont on Angel
"Well, the problem with the Angel, as we discovered after we put him back in The X-Men, is that's he's functionally redundant. The only he can really do is carry people around. He flies and he hits people, but considering the quality of the foes the X-Men run up against, that really doesn't give him much opportunity to do things."

John Byrne on Caliban
"He was going to be an incredibly ugly Living Cerebro kind of character, whom we would never see entirely. We would only see bits and pieces of him. And he would live in this dark room in the back of the mansion and Kitty would be able to relate to him for some reason. Chris defined the situation as being that she can't stand Nightcrawler because he is so "wrong" somehow, he is human done sideways, but Caliban was so hideous and so deformed that he was a broken thing, like a bird with a broken wing, and she could relate to him on that level. And it was going to be a very trying thing for Nightcrawler, the fact that Kitty could relate to Nightcrawler but not to him....they [the X-Men] were going to discover the tap that the Hellfire Club had put on it [Cerebro], or at least figure out something was amiss, and he was going to fulfill the function of Cerebro for them."

Teebore's Take
Though we're not exactly back in "all time classic" territory, this issue is a decided step up from the previous three, thanks in large part to a good chunk of the issue being turned over to quieter moments of Claremontian downtime and characterization. And while Dazzler is still very much a product of her time and Caliban isn't exactly going to light the world on fire, the second half of the book is the kind of old-fashioned superhero fun the previous story reached for but couldn't quite achieve. Nothing here is groundbreaking or terribly compelling, but the presence of Spider-Woman and Dazzler make the story a snapshot of its time, in a good way, and give the action scenes an eclectic energy. At the very least, this issue feels like both a Claremont comic and an X-Men comic (albeit a decidedly average one). It's never going to make anyone's "best of" list, but it's a step in the right direction.

Next Issue
The return of Garokk! It's okay if you don't remember him.
Newer Post Older Post Home
Posted by Austin Gorton at 8:00 AM