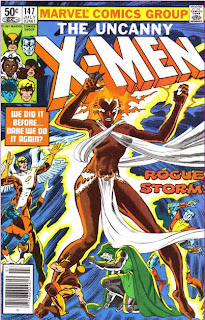 In a Nutshell
The X-Men escape from Dr. Doom

Plot
Two miles above Doom's castle, Nightcrawler suddenly appears, having teleported straight up as far as he could in the hopes of avoiding any obstacles. Using updrafts from the raging storm to slow down his velocity, he crashes into a lake. Back at the castle, Doom order his men to retrieve Nightcrawler while NORAD monitors the ever-growing storm. Nightcrawler arrives back at the castle and takes out two guards, sneaking inside. Colossus, Angel and Wolverine all manage to escape their respective prisons, and Wolverine tracks Storm to Doom. Sensing she's a fake, he quickly dispatches the Storm robot and engages Doom. Just then, Nightcrawler teleports into the room and the two overpower Doom, forcing him to restore Storm. 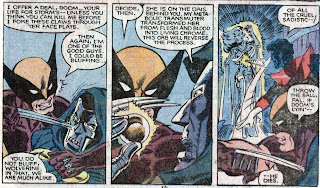 He releases her from her organic chrome shell, but an enraged and out-of-control Storm refuses to calm the hurricane she's created, and revels in her power. Colossus bursts into the room, and by reminding Storm of Phoenix, manages to get through to her.  She flies into the sky and manages to dispel the storm, but is exhausted by the effort and Angel must catch her before she falls. On the ground, the X-Men take Arcade into custody and force him to apologize to Doom, and the X-Men part with Doom as neither friends nor enemies. Meanwhile, with the storm abated, Cyclops and Lee Forrester awaken on their island in the Bermuda Triangle to discover a fantastic city on a nearby island that wasn't there the day before.

Firsts and Other Notables
Honestly, this is the first issue of the series in which I can come up with nothing notable to mention, which is a testament to its inherent mediocrity.

A Work in Progress
With Cockrum back on board, Nightcrawler gets the spotlight in the opening pages, a nifty sequence in which he teleports straight up, out of Doom's castle, then rides an updraft created by the storm to bleed off his velocity before landing in a lake. 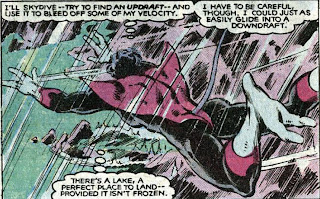 In another neat detail Nightcrawler has to be careful not to let his teeth chatter, for fear that his fangs will cut up his lips and tongue. 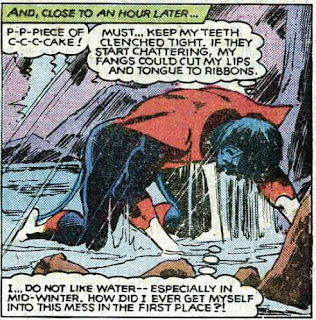 Wolverine notes that his control over his berserker rages has been slipping lately. 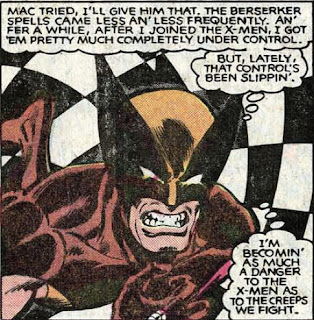 We are once again told about Storm and Jean's deep friendship.

I Love the 80s
Emerging from the frigid lake at the beginning of the issue, Nightcrawler wonders how he got into the situation in the first place, prompting a one page spread depicting the events of the last two issues, offering any first time readers a chance to catch up with the story. 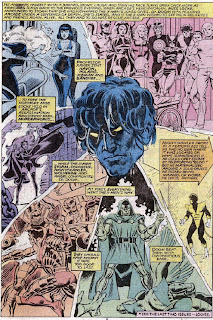 Dr. Doom's defeat is partially brought about by Nightcrawler wrapping him up in a curtain, a technique once used against so great a foe as Maha Yogi. Doom =/= Maha Yogi. 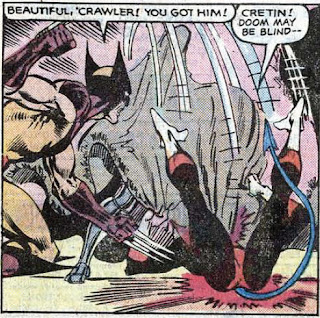 Claremontisms
Claremont once again references Phoenix, this time in comparison to the power-mad Storm that emerges from Doom's living statute, as it takes Colossus reminding her of Jean to snap Storm out of her fury.

He also dusts off that old metaphoric chestnut that so enraged John Byrne, comparing Storm's power to a song within her.

Claremont goes all out in this issue with technical explanations of various powers, first the extended Nightcrawler opening sequence in which we learn that teleports "north-south (along Earth’s magnetic lines of force) [are] easier than east-west (against them)." Later, Storm mentions that were she Thor, she could simply disperse the storm with a thought, but her power requires her to "work with the forces of nature, not ride roughshod over them". Finally, as Angel attempts to catch an exhausted, falling Storm, he is careful to match her terminal velocity and gradually break her descent.

Frankly, these little technical insights into various powers are the highlight of the issue.

Young Love
Doom pretty much gets to walk away at the end because Storm has the hots for him. 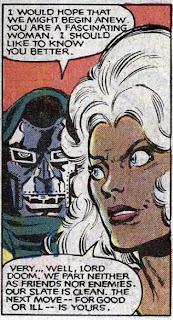 Cyclops and Lee awake in each others arms, but it's unclear if they did anything of a romantic nature. At any rate, Scott awkwardly calls her Jean (and repeats the "Hi/Hi yourself" didactic with "Morning/Morning yourself").

The Best There Is At What He Does
Dr. Doom's trap forces Wolverine to relive a memory in which he lost control and almost attacked James and Heather Hudson (interestingly, he's wearing what I assume is a Canadian Army uniform in the flashback, the first "present" day indication that he was in the army at one point, I believe). 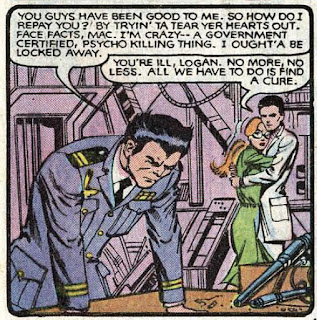 For Sale
The second Superman/Spider-Man team-up book, which I've never read and honestly didn't know existed until I saw this ad, is promoted in this issue. 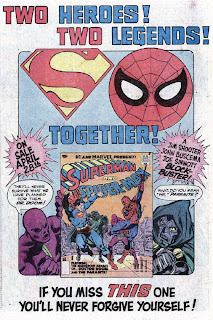 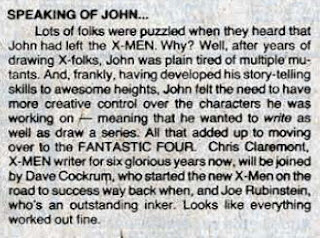 Chris Claremont on plotting with Dave Cockrum
"Dave is free to modify it as he wishes. I've preferred if he would call me if there's going to be any major change, and he does. We synthesize it. For example, in the third part of the Doom story [issue #147], the way the plot originally evolved, Storm had gone crazy, she's about to destroy everything, the X-Men are trying to talk her out of it. She's not crazy any more, shes trying to disperse the hurricane that she's created, but she's not strong enough, and Doom has this machine that will help her in his laboratory. So, the X-Men help him get to the laboratory and Doom picks up the machine and - zap - helps Storm, thereby proving he is not a cad and a bounder and giving the X-Men incentive not to punch his lights out at the end of the story. Well, we ran out of room, so we dumped the scene. That didn't really bother me, because I didn't like the idea of Storm being helped. If one is going to be heroic, one should go all the way. Storm should do this by herself. But, that's an example of what happens. Things get lost, things get changed. It's a mutable process from start to finish."

Teebore's Take
The Doom/Arcade trilogy mercifully comes to a close, as Claremont once again goes back to the "Dark Phoenix" well, with diminishing results (Storm flying off the handle at the end of a lackluster story featuring an uninspiring Dr. Doom/Arcade team-up barely compares to Dark Phoenix). In addition to the other problems with this story noted in previous posts, re-reading this issue pointed out another flaw. Most Claremont stories, even the more average ones, usually feature at least one or two moments of characterization or a cutaway to an intriguing subplot. This story, for the most part, does none of that, telling its A-narrative with little deviation for subplots or character moments. In that regard, this issue is probably the best of the three, giving us some nifty pseudo-science examinations of various characters' power, a brief Wolverine flashback (albeit covering similar ground to issue #140) and the Cyclops/Lee subplot (the one subplot to appear in each of three issues) finally gets interesting (on the last panel). But it's not enough to save the story as a whole. When a story is as good as "Dark Phoenix", "Days of Future Past" or "Proteus", it doesn't need a lot of subplots or cutaways setting up more interesting things, and the characterization is built into the action. When the story is this pedestrian, it leaves us with nothing else to take away from the issues beyond a straight-forward, by-the-numbers (and rather boring) super-hero adventure that ultimately fails to take advantage of one of Marvel's best villains. Thus, the first story of Claremont and Cockrum's second run must, ultimately, be deemed a disappointment, if not an outright failure.

Next Issue
Spider-Woman returns the favor and makes a guest-appearance in X-Men in an issue that also sees the return of the Disco Dazzler!
Newer Post Older Post Home
Posted by Austin Gorton at 8:00 AM