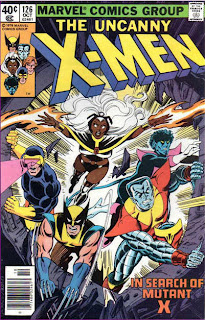 In a Nutshell
The X-Men attempt to capture Mutant X.

Plot
The X-Men race to Muir Island aboard the Blackbird, crossing the ocean in just over an hour. As they fly over the island, the X-Men fan out, searching the complex for signs of trouble. Colossus encounters Havok and Multiple Man and they tussle briefly, the Muir Islander's believing the real Colossus to be dead, while Storm and Cyclops encounter Moira. Cyclops breaks off on his own and finds an unconscious Phoenix, who comes to briefly. She confuses Cyclops with Jason Wyngarde, then passes out again. Later, after the X-Men have scoured the island and found no trace of Mutant X, everyone convenes to plan their next move. Multiple Man explains how, after hearing Lorna's scream, he sent a duplicate to help her, who stopped Mutant X from killing her but lost his own life when he was possessed by the villain. As Cyclops stresses the need for more information, Moira reluctantly admits that Mutant X is her son. 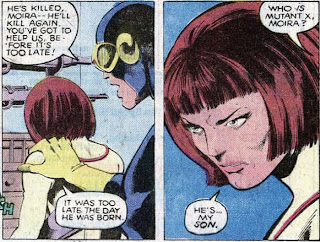 Meanwhile, Mutant X, in the body of Multiple Man's duplicate, arrives in nearby Stornoway. He attempts to possess a passing Jason Wyngarde, but finds his way blocked by some kind of psychic shell he's too weak to penetrate. So instead he takes the body of a drunk man named Ferdie Duncan. Outside the city, the X-Men split up into search parties. As they search, Moira tells Cyclops that Mutant X has two weaknesses: his need for host bodies, and metal. As Phoenix searches on her own, watched by Wyngarde, she once again finds herself transported back to the 18th century, in the middle of a stag hunt. Shocked back to reality, she comes face to face with the corpse of Ferdie Duncan while a few miles away, Wolverine tracks down Mutant X, who has taken the body of a cop. He attacks Wolverine and attempts to posses him, but Wolverine's adamantium bones force him back in a panic. Nightcrawler intervenes, but Mutant X fights back, calling himself Proteus and using his mutant power to warp reality around them. Just then Storm arrives but Proteus forces her to the ground. She calls up a ferocious wind to force him back, but Proteus slowly advances, moving in for the kill.

Firsts and Other Notables
Mutant X makes his first full appearance, and takes the name Proteus, "the mutant who masters reality". We learn he has the power to manipulate reality (his ability to possess host bodies is less a power and more a condition of his state of being). It is also revealed that Mutant X is Moira MacTaggert's son. 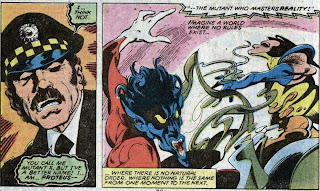 The X-Men are reunited with Phoenix and the Muir Island crew, and the "we thought you were dead" business is put to rest once and for all.

A Work in Progress
The X-Men arrive on Muir Island and take charge of the situation with military efficiency. Though Proteus is long gone, it's a neat sequence which shows how far the new X-Men have come in terms of working together.

It's noted that Beast, who was planning on coming to Muir Island with the X-Men last issue, was left behind because, after hearing Lorna's scream, Cyclops didn't want to take the time to wait for him to come back to the mansion after returning his Quinjet to the Avengers.

When Phoenix is awoken after Mutant X's attack (from last issue) she initially sees Cyclops as Jason Wyngarde, and recognizes him as someone she loves. 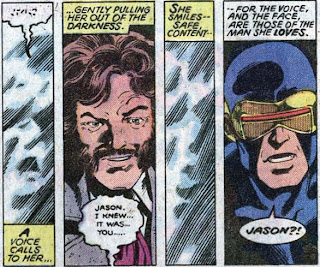 Later, she experiences another timeshift to the 18th Century, where she's hunting alongside Jason. In a creepy moment, it's revealed that they are hunting a man dressed as a stag, which was Jean's idea. 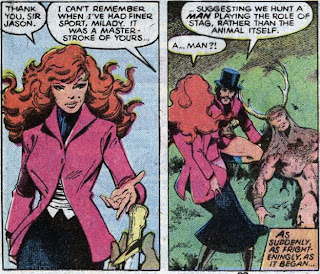 I believe this is the first time Jamie Madrox experiences the death of one of his duplicates. 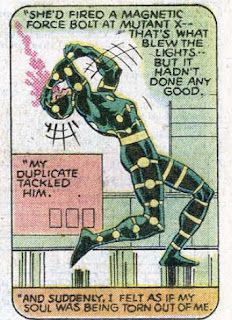 Wolverine and Cyclops continue to argue over tactics. 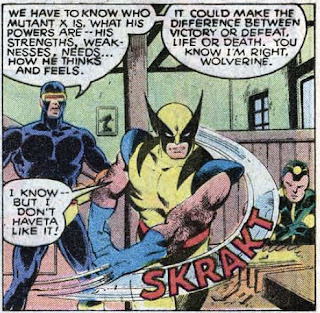 Proteus' two weaknesses are made explicit: his constant need for new host bodies (as he burns them out quickly) and his intolerance of metal. 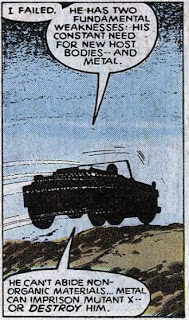 Phoenix is unable to track Proteus telepathically, a fact she keeps from Cyclops.

After several hints to the effect, this issue reveals that Wolverine's skeleton is made of "three million bucks worth of adamantium" (the idea that his bones are laced with the metal, and not composed entirely of it, will come along later). 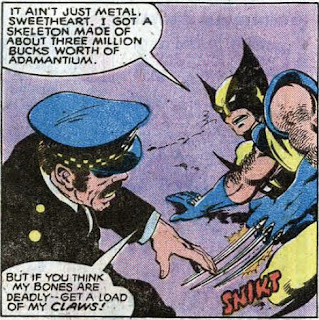 Storm once again notes her reluctance to take a life. 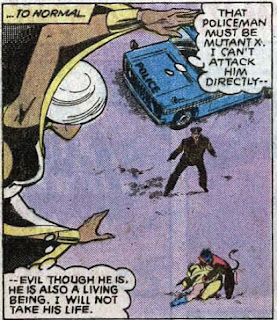 That 70s Comic
This entire story hinges on fairly large coincidence, that Beast just happened to check in on the X-Mansion (as seen in issue #125) at just the right time to tell Cyclops that Phoenix is alive, so that Cyclops could call Muir Island just as Mutant X, after hiding on the island for weeks, attacks Phoenix and then Lorna while she's on the phone with Cyclops, spurring the X-Men into action.

Claremontisms
Claremont returns to another favorite trope, last seen in issue #121, of the slow reveal of the nature and extent of the villainous threat. Here, the full force of Proteus' power isn't seen until the issue's end.

Artistic Achievements
There's a cool two panel sequence where Nightcrawler teleports from the Blackbird to Moira's living room and his body/teleportation effect forms the panel border between them, one panel on the plane, the other in the room. 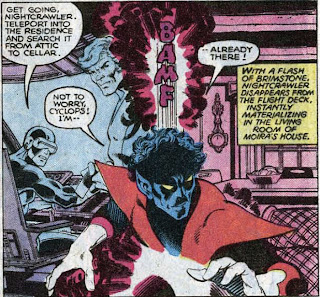 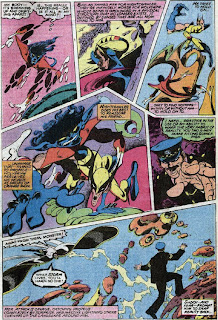 "Professor Xavier is a Jerk!"
Claremont originally intended for Proteus to also be the son of Professor X (the "X" in Mutant X then standing for Xavier), but the idea was, as discussed below, scuttled by Byrne.

Young Love
Though Cyclops breaks off from the group to make sure he finds Phoenix alone, their reunion, after both believed the other to be dead, is surprisingly low key, with Cyclops doubting their relationship after all the "not really dead" nonsense. 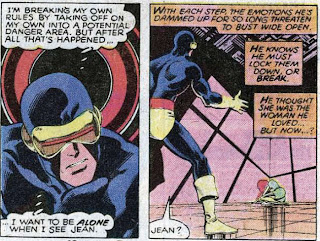 To her credit, when Moira first encounters Cyclops, she quickly asks for assurance that Banshee is alive as well. 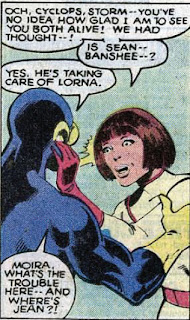 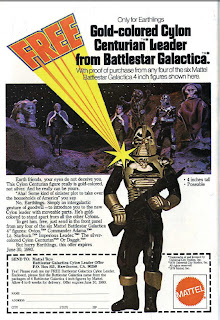 Chris Claremont on the lack of a proper Scott/Jean reunion scene
"Sometimes I plot moments into a story and they've been shunted aside for various reasons. For example, the reunion of Scott and Jean in #126 after they've been apart for months and months and months - well, in the original plot, the reaction to that meeting was supposed to take place in #126...but John felt he didn't have space, and there wasn't really an opportunity to do it in the next two issues of the Proteus saga, because everybody was going boompetyboompetyboom, lickety-split to the end. So we had to postpone it to #129. It was a structural decision for which we must both take the blame, but that's unfortunately how things work sometimes. To have added the scene would have meant adding a whole new page to the book and cutting a page somewhere else, or repencilling the last 15 pages, or nine pages, or 11 pages, and that's beyond the bounds of sense."

John Byrne on the secret origin of Proteus
"The notion that Moira [MacTaggert] had this son who she kept locked away had sort of been lurking around since the Claremont days. I don't remember how much of it had actually been revealed in the book by the time I came on board, but Chris and Dave had certainly already worked Proteus out, and were set to unleash him at some point. Ultimately, though, it was Chris and I who unleashed him. Chris had it in his head that it was Moira and Xavier's child. Xavier's bastard child, but I said, 'No, I don't think superheroes have bastard children.' So instead he became Moira and Moira's ex-husband's child. He was a huge menace - something big and really bad - because we were constantly trying to outdo ourselves."

John Byrne on the end of the Cyclops/Collen Wing relationship
"She was introduced for a very specific purpose: to create the conflict that never really came about when Jean came back. "Here's Jean back and here's Colleen, and oh jeez, I jumped into Colleen so fast and I did not care about Jean" and all that kind of stuff, which didn't happen because Mary Jo Duffy quite rightly demanded Colleen back to do stuff with her. Chris has an unfortunate tendency to think that once he's written a character it's his character, and I try to think that once I leave a book I leave the characters behind."

Teebore's Take
This issue marks the beginning of, arguably, the best straight-up superhero action story of Claremont and Byrne's run. Though it lacks the innovations and psychological depth of the story which follows it, "Proteus" is a highly-polished comic book story. It is tightly plotted and well paced (this issue in particularly breaks down into three neat acts, with two suspenseful scenes of the X-Men searching for and later encountering Proteus book-ending the "who the villain is/what he wants/what he can do" act) with a sinister villain who presents a credible threat to the heroes, complete with a power tailor made for the form (Proteus' reality warping ability is a bit nebulous when thought of in a real world context, but lends itself greatly to the comics' page, where it can be depicted with a surreality that would be hard to do in other mediums). It may "just" be a standard comic book action story, but "Proteus" is one which serves as a great example of the form.

Next Issue
We find out whether Storm can escape the power of Proteus!
Newer Post Older Post Home
Posted by Austin Gorton at 8:00 AM