One of the big draws of the new Star Wars blu-ray release were the deleted scenes included from each of the films. Before the release, I had heard about a few of them, but was still surprised by the sheer volume of deleted scenes included (some of which I'd never even heard of), as well as by some of the scenes that were included. Here is a look at five of my favorites. 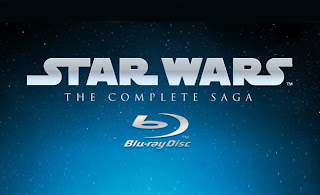 (Thanks to Star Wars Aficionado Magazine for the screen caps. Check out their great early-release look at some of the deleted scenes here). 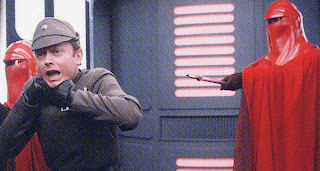 What it's about
A collection of scenes comprising a cut subplot from Jedi featuring Moff Jerjerrod, the commander of the second Death Star (he's the Imperial who greets Darth Vader at the very beginning of the movie). In it, he is ordered by Palpatine to fire on Endor should the shield generator be destroyed, but is reluctant to do so because of all the Imperial troops still stationed on the planet.

This is a scene I'd never heard of before, and as I far as I know, never made it into any of the novelizations/adaptations. It was interesting to see an Imperial portrayed sympathetically, not just as a bloodthirsty or spineless toady. This collection of scenes also includes one in which Jerjerrod, by orders of the Emperor, bars Vader from entering the throne room, in which we get to see the Imperial Guards whip out their Force pikes and do something other than stand there, which was pretty cool.

Why it was cut
Though clearly intended to mimic the end of A New Hope and ratchet up the tension, with the Death Star threatening Han, Leia, Chewie and the droids if Lando doesn't blow it up fast enough, while also humanizing the Empire a bit, it was probably cut for time, and to keep the focus of the film's final act on the three main storylines: the battle on the planet, the battle in space, and the Luke/Vader/Palpatine confrontation.

4. Wampa Attack - The Empire Strikes Back 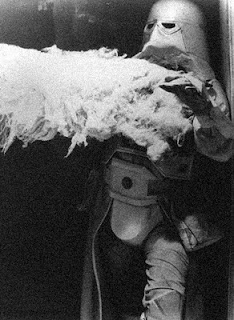 What's it's about
In early drafts of the script, there was an extended subplot during the sequences on Hoth involving the Wampa ice creatures (one of which attacks Luke early in the film and loses an arm) invading the Rebel's Echo Base before ultimately getting contained within one room, a room into which C-3PO later leads an unknowing group of Stormtroopers. Parts of this subplot made it into the Empire Strikes Back comic book adaptation, and has been featured in several Star Wars video games, most notably Shadows of the Empire, and one of the original trailers for Empire featured a shot of Threepio tearing the warning off the door to the Wampas' pen inside Echo Base.

The blu-ray contains a compilation of the scenes filmed but ultimately cut involving this subplot, such as the Wampas slowly breaking through the bases' snow walls, attacking some Rebel soldiers (and R2-D2), getting herded into a room, and grabbing an unknowing Stormtrooper during the Empire's attack on the base. All of the scenes were cut early on, and thus lack finished visual or audio effects.

Why it was cut
The explanation on the BD says the sequence was ultimately cut due to dissatisfaction with the effects and the Wampa costumes/puppets, and they are indeed humorously awful. Even if the effects had worked out, the subplot likely would have derailed the narrative of the movie's first act and created some tonal disconnects with the other events (these scenes are alternately played for horror and humor). It serves as a reminder that having no limitations when it comes to visual effects isn't always a good thing. Aside from having read about this cut sequence in numerous places through the years, I loved watching these deleted scenes just because they are so hilariously bad.

3. Vader Calls Out to Luke/Luke Completes His Lightsaber - Return of the Jedi 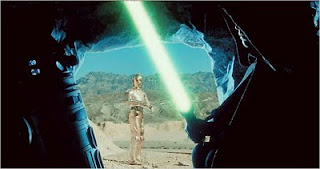 What it's about
The big deleted scene that was announced alongside the blu-ray set, it was cut from the film at the last minute, and as a result is one of the most finished deleted scenes, featuring full score, James Earl Jones dialogue, and finished visual effects. In it, Vader, after arriving on the Death Star, retires to his chamber (actually footage left over from Empire) and reaches out to Luke in the Force, tying to lure him to the Dark Side. Luke hears him while on Tatooine where, within a cave, he completes his new lightsaber and gives it to R2-D2, before sending the droids off to Jabba's palace (to where we see them on the road in the finished film).

Surprisingly, given the finished nature of the scene, this a deleted scene I'd heard very little about through the years. Various adaptations include it (the novelization even has a full scene of Luke completing his lightsaber in Obi-Wan's old house), but it never captured my imagination the way some of the other cut scenes did. Still, it was definitely worth inclusion, for a little bit of new, extra music, to see Luke fire up his new lightsaber for the first time, and to see a deleted scene that was more or less capable of getting dropped into the finished film. Plus, it contains a shot of an heretofore unseen matte painting of the Millenium Falcon and Luke's X-wing parked in a valley, which also includes a small glimpse of a Krayt dragon. 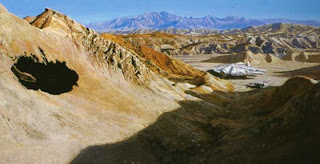 Why it was cut
The BD description notes the way Luke remains hidden his hood throughout the scene, to better disguise his true allegiance to the Force, and, back in the day, audiences were clearly supposed to spend the early minutes of the film questioning whether Luke was good or bad (or, at least, darker). Perhaps this scene was cut to better facilitate that, or to heighten the surprise when Artoo shoots out Luke's lightsaber, or just to more closely mimic the opening of the first film, when Luke enters well after the main action has begun.

2. The Sandstorm - Return of the Jedi 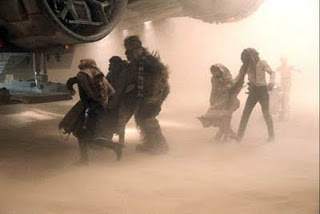 What it's about
After defeating Jabba the Hutt, Luke and his friends arrive at the Millenium Falcon and Luke's X-wing during a massive sandstorm. This was the first scene shot for Jedi and the first scene to be cut, and is another one that made it into some of the adaptations, so it's become a much-desired deleted scene for fans. It appears on the BD with unfinished audio, so all the actors are shouting their lines to be heard over the offscreen fans being used to simulate the sandstorm. Another scene that was fun to watch just because I'd read it so often. The cast does a remarkable job in it and it's great to finally see the first scene to be shot for Jedi, and one of the most-discussed Star Wars deleted scenes.

Why it was cut
Most of the dialogue from this scene was eventually laid over the scene in the finished film in which the ships depart Tatooine, leading to a quicker transition off the planet and easier-to-capture audio (the actors are no longer shouting over the fans). Still, we lost a line of dialogue and a neat moment when Han greets his beloved ship for the first time since getting frozen in carbonite. 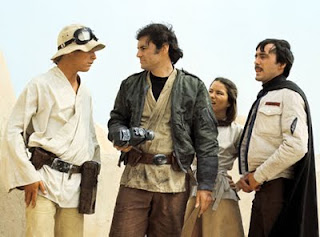 What it's about
Luke's original introduction, well before his first appearance in the finished film. Wearing a doofy floppy hat, he spots the lights of the starship battle overhead and races to Tosche Station, the local hangout, where he tells his friends about the battle (we hear them call him by his nickname, Wormie) and learns his old buddy Biggs is back from the Academy. Luke and Biggs talk, and Biggs tells Luke he's planning to jump ship and join the Rebel Alliance, while Luke bemoans having to stay another season on Tatooine.

Honestly you guys, you have no idea how surreal and awesome it was to watch this scene. To me, this has always been the deleted scene, the one that shows up in all the adaptations, the one I've read about in "making of" books. There are stills from it in the movie storybook, it's part of the radio dramatization and there's an even an action figure of Luke wearing his stupid hat. As a result, more than any other deleted scene, this always felt like a part of the movie I just hadn't seen. Yet everything I've ever heard was that the scene was incomplete, that not all of what was scripted was filmed, and that what was filmed had been lost/destroyed through the years. Crude pieces of it appeared in black and white on a Star Wars CD-Rom back in the nineties, but we were led to believe that's all the footage which existed. And yet, here it was, completely surprising me, on the BD set, in its entirety. It's a rough cut (the audio hasn't been overdubbed), and the film quality of the early minutes is poor, but it's there.

And seriously, it's not that cool of a scene: Luke sees some lights in the sky, gets picked on by his friends, has a nice heart-to-heart with Biggs and whines some more, but I can't describe how mind-blowing it was to actually see it after experiencing it in so many ways other than film.

Why it was cut
Originally, George Lucas felt like he needed to introduce Luke to the audience much sooner than when he actually appears in the finished cut, so this scene served as Luke's original introduction. Ultimately, Lucas decided it was better to bring Luke into the narrative later by having the droids bring the story to him, and it definitely works better that way. This scene makes Luke look like even more a whiner, and the only thing it adds is further definition of his relationship with Biggs. But even with this scene included, Biggs would have still felt like the minor character he is.

Nonetheless, it was pretty damn awesome to finally see it.
Newer Post Older Post Home
Posted by Austin Gorton at 8:00 AM