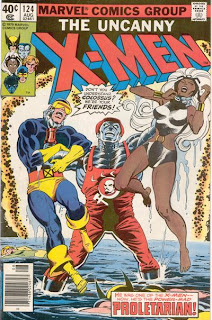 In a Nutshell
The X-Men escape Murderworld (alive).

Plot
Arcade watches as Cyclops and Wolverine reluctantly fight a brainwashed Colossus, stopping to tell Colleen Wing and the other imprisoned X-girlfriends his origin. The battle amongst the X-Men leads to Wolverine and Cyclops getting separated. Meanwhile, Storm finds her trap filling with water to the point where she's almost out of air. Cyclops emerges in Nightcrawler's trap and destroys one killer buzzsaw car, only to have several more appear, while Wolverine runs into Banshee, now beset by science fiction star fighters. With the help of his heightened senses, Wolverine is able to find a maintenance tunnel, but when he Banshee enter it, they are confronted by the incredible Hulk and Magneto. 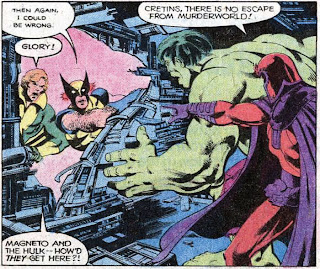 Meanwhile, Storm dives deep into the water of her trap looking for a way out. She discovers a wide pipe and attempts to blast off the bars over the opening with lightening. At the same time, Cyclops and Nightcrawler are getting rushed by multiple killer cars, but Cyclops manages to destroy them all with a single optic blast and expose another maintenance tunnel. He and Nightcrawler split up. Cyclops comes across Wolverine and Banshee battling Hulk and Magneto, who are revealed as robot duplicates, while Nightcrawler finds Arcade's control room. He attacks Arcade, but is gassed into unconsciousness by Arcade's assistant. The other X-Men defeat the robots only to have the room suddenly fill with water. When it subsides, they find an unconscious Storm, whom Cyclops is able to resuscitate. Just then, a still-brainwashed Colossus attacks the X-Men. Storm and Cyclops are able to pierce his brainwashing, and Arcade decides to cut his losses. Gathering the X-Men into a giant pinball, he launches it out of Murderworld. The X-Men emerge far away in time to see Nightcrawler and their girlfriends gift-wrapped and floating gently to the ground via parachutes. A note attached to Nightcrawler from Arcade credits round one to the X-Men.

Firsts and Other Notables
Arcade details his origin to Colleen: a spoiled rich kid from Beverly Hills, Arcade killed his father and then used his inheritance to create Murderworld, combining his genius and love of killing. After getting bored using Murderworld to kill regular people, he started targeting superheroes, starting with Captain Britain and Spider-Man. 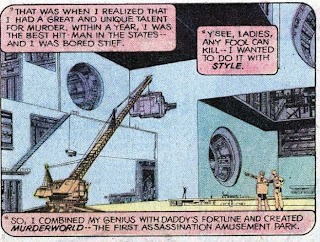 A Work in Progress
So...after trying to warn the X-Men and learning they'd been captured by Arcade, and becoming so enraged by that fact that he destroyed a phone booth last issue, Spider-Man apparently just gave up and went home.

Cyclops' "inborn talent for spacial geometry" is mentioned for the first time.

Wolverine's heightented senses are highlighted for the first time again, as he's able to distinguish holograms from reality via smell. 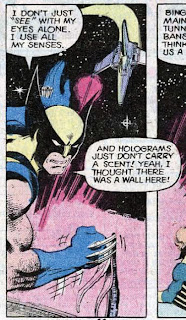 That 70s Comic
When last we saw Banshee, he was being attacked by WWII-era aircraft. This issue, he's in a sci-fi battle zone, dubbed "Battlestarwars: 1999" by Arcade, a portmanteau of Battlestar Galactica, Star Wars, and Space: 1999. 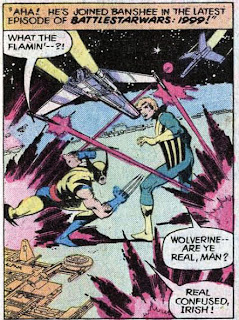 Colossus snaps out of his brainwashing thanks to love. So...yeah. 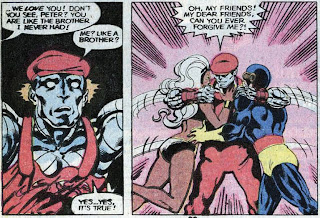 Claremontisms
Lots of German expressions in Nightcrawler's dialogue this issue: verdammt (damned), mein freund (my friend), fraulein (young lady), was ist (what the!?!),

In one of those neat little details about someone's power that Claremont likes to work into his stories, Storm notes that using her power in water is difficult as it's a heavier medium than air. 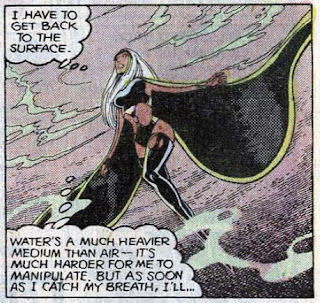 He also teaches us about pearl divers saturating their body with oxygen before diving.

The Awesome and Terrible Power of Cyclops
Cyclops gets a great "F*@% yeah!" moment this issue, as he uses his power to take out all the killer bumper cars with one blast. 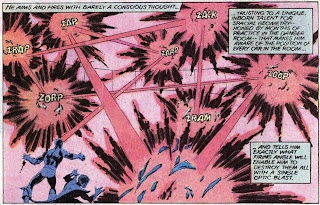 For Sale
Don't let icky girls get their hands on your toys! 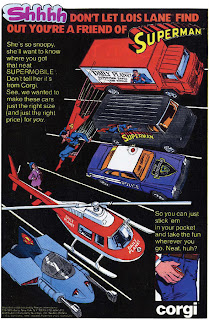 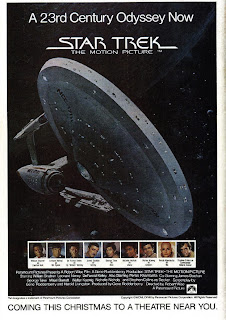 John Byrne on Colossus
"Colossus I saw as a very simple, very straightforward kind of guy-Jethro with brains. Chris at one point said he was a poet at heart, which I think is a good description, but he's a poet who doesn't have have the words. He doesn't have the language, the control of his thoughts to be a poet. He's just a very simple, basic, straighforward kind of guy. He would have been a great pioneer, and he would have been great out there in the American West two hundred years ago".

Teebore's Take
The wrap-up to the Arcade story remains as problematic as it was in the first part, with Arcade essentially letting the X-Men go once they've cleared Colossus' head, despite the fact that Arcade had Nightcrawler, at least, at his mercy (not to mention the X-Men's girlfriends). Similarly, the long-running subplot involving Colossus' doubts about his effectiveness and his homesickness is wrapped up a bit too quickly and easily, with Storm and Cyclops reaffirming the X-Men has a family and the importance of Colossus within that family. Again, Claremont and Byrne make the most of what is a relatively simple, throwback story, but that doesn't change the fact that this Arcade two-parter is probably the weakest story in their run. Fortunately, it's our last gasp of air (well, this and an annual) before Claremont and Byrne kick off a series of stories that will raise their run, the X-Men, and superhero comics in general to new heights, a series of stories whose repercussions are still being felt today.

Next Issue: X-Men Annual #3
Before all that though, we check out the first original story to appear in an X-Men annual (even though it's #3).
Newer Post Older Post Home
Posted by Austin Gorton at 8:00 AM