A Few Thoughts on the 63rd Annual Emmys

The opening number, with Jane Lynch singing her way through various TV shows (that all apparently exist in the same building, for some reason, and Leonard Nimoy doesn't want us to know that...?) was pretty lame, and that's coming from someone who loves these big, over-the-top openings to award shows. The lone highlight was when Jane stumbled into Mad Men and flirted with Peggy before being thrown out by Don Draper, outraged at her news that in the future, people can fast-forward through commercials. 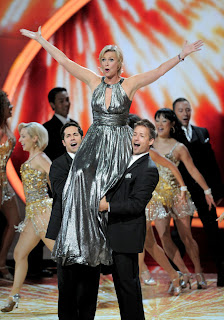 Opening aside, Jane Lynch was a pretty respectable host, and it was nice to see her outside the Sue Sylvester box for a change. Amongst my favorite lines were, "many people wonder why I'm a lesbian. Ladies and gentlemen, the cast of 'Entourage'!" and, "there are so many movie stars doing TV now that TV stars have been forced into providing voices for video games. And those very same video games are then turned into movies starring the very same people who put the TV stars out of work in the first place. Hakuna Matata, my friends, circle of life."

Modern Family is clearly the new Emmy favorite, as they swept the first four awards of the night and were only stopped when a category came up for which they had no one nominated. While Ty Burrell's win wasn't too surprising (this last season really was Phil's breakout season), it was somewhat surprising that Julie Bowen won, mainly because most critics seem to prefer Sophie Vergara over her. 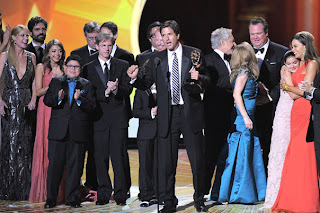 Melissa McCarthy seems terribly nice, and I'm sure Bridesmaids was hilarious too, but I'm still bummed Amy Poehler didn't win for a terrific, terrific episode (and season) of Parks & Rec, the funniest show on TV (she was nominated for "Flu Season").

I got hoodwinked into thinking the academy would go sentimental and give Steve Carell his first Emmy for playing Michael Scott on The Office in his last chance to win it, but instead they went the far, far easier route and gave the award to reigning winner Jim Parsons, who is plenty funny but terribly broad (and a bit played out) on The Big Bang Theory. It was a decision that smacked of laziness on the part of the voters. I don't even watch The Office regularly, but it's kind of a shame that Carell will go off into the sunset having never run an Emmy for a role that has, in many ways, epitomized roughly the last decade of TV comedy. Still, at least he is in good company amongst other great actors with great TV characters who were shunned by Emmy.

I've not seen it, but the Dr. and Mrs. Bitz must be pleased that Friday Night Lights got some farewell love from the Emmys following its last season. 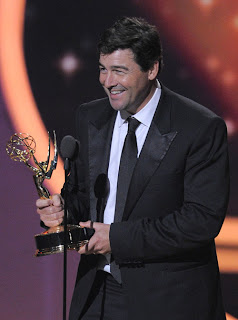 After a brief, one year upset, Top Chef is back to losing to The Amazing Race, which is a shame, considering Top Chef's All Star season was better than the season which won...

When those guys (the Canadian Tenors, I guess) first started singing "Hallelujah" at the onset of the "In Memoriam" segment, Mrs. Teebore and I were terribly confused, wondering who they were and if, in light of the black garb and smoke pouring from their feet, they were in fact dead, and some kind of Ghost Choir. There's a simple rule awards show producers should follow and lately seem to forget: when it comes to these segments, keep it simple and focused on the departed. It doesn't need to be a lavish musical number.

Without a doubt the highlight of the show was the mash-up of Lonely Islands's greatest hits of the last year. complete with Michael Bolton in a pirate costume, John Stamos singing about a three way and William H. Macy getting freaked.  All I know is, I hope its on iTunes... 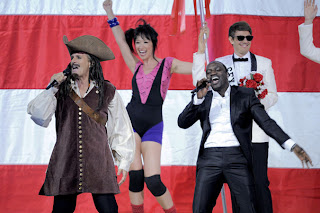