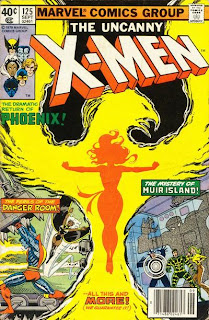 In a Nutshell
Mutant X makes his move on Muir Island while the X-Men learn Beast and Phoenix are alive.

Plot
On Muir Island, Moira tests the limits of Phoenix's power, both women unaware they are being watched by the possessed, decaying form of Angus MacWhirter. Meanwhile, the X-Men are training in the Danger Room while, on Asteroid M, Magneto is recuperating from his last battle with the X-Men, thinking of his late wife and planning his next move. In Scotland, in a town near Muir Island, Jason Wyndgarde ruminates about his recent manipulation of Jean and his desire to mold her into the Black Queen of the Hellfire Club. Back on Muir Island, Moira studies the test data on Phoenix, and realizes Jean still has access to god-like power, while on the Shi'ar Imperial Center, Professor X studies the record of Phoenix's actions inside the M'Kraan crystal, and realizes for the first time the true extent of her power, deciding he must return to Earth at once. 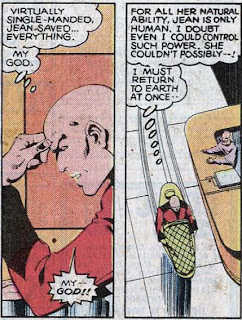 On Muir Island, Moira discovers that Mutant X has escaped from his cell, and Phoenix, sensing her terror, flies to help. Rounding a corner, she suddenly finds herself in an 18th century mansion, dressed as a noblewoman, but snaps out of the hallucination when tackled from behind by MacWhirter. Coming face to face with him, she screams in terror. Meanwhile, in New York, Beast arrives to check out the security at the X-Mansion, finding it disabled. He is attacked by Nightcrawler who, upon recognizing Beast, teleports away, frightened and believing he saw a ghost. Responding to the intrusion, Cyclops and comes face to face with Beast, and the two are overjoyed to learn the other isn't dead after all. Beast quickly tells Cyclops Jean is alive as well. The X-Men prepare to depart for Muir Island, agreeing to wait for Beast to return his Avengers Quinjet. But when Cyclops phones Muir Island, he reaches Polaris, in the midst of a search for Moira and Jean. She fills Cyclops in on the situation, and he agrees to leave at once, but before Lorna can finish, she screams and the line goes dead.

Firsts and Other Notables
The whole "believed dead" business finally comes to end in this issue, as Beast returns to the X-Mansion and discovers the very much alive X-Men living there. He reveals that Phoenix survived as well (the reunion between the X-Men and Phoenix is held for next issue), putting the entire thing to rest. 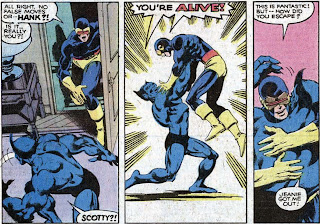 After being alluded to in earlier issues, Mutant X makes his first appearance, in the shadows, though as he's possessing the body of Angus MacWhirtier, it's not much of an "appearance".

Jason Wyngarde begins his seduction of Phoenix in earnest this issue, and Jean experiences her first "timeshift", in which she suddenly finds herself in the guise of an 18th Century noblewoman. We also see her dressed as the Black Queen for the first time. 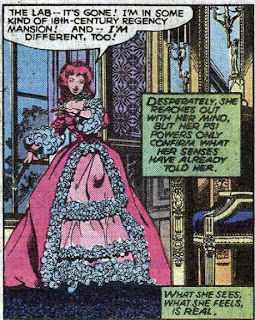 Lilandra appears as Empress of the Shi'ar for the first time.

Finally, this issue also establishes that Magneto is the father of Quicksilver and Scarlet Witch. One month after the publication of an Avengers issue (also drawn by John Byrne) which revealed Quicksilver and Scarlet Witch's birth mother to be a woman named Magda, here it is revealed that Magneto was once married to a woman named Magda who bears a resemblance to the Scarlet Witch. The connection was meant to remain that subtle, but later writers made it more overt. 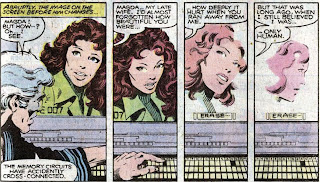 As such, this issue also reveals that Magneto was once married, and its portrayal of Magneto recovering from his wounds (inflicted in issue #113) and missing his late wife is the first, albeit small, step towards the deepening of his character that Claremont will more fully embark upon once Byrne has left the book.

Moira later deduces that the sudden power loss Phoenix experienced while battling Magneto in issue #113 was a result of an "instinctive psychic circuit breaker" she subconsciously activated to bring her cosmic powers back down to a more manageable level, but that the potential for greater, even god-like, power still exists within her. 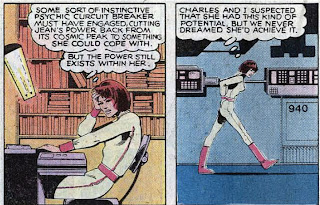 Apparently the Danger Room was repaired between the annual and this issue, as the X-Men are back at it (though Banshee and Cyclops are controlling it from within the room itself, so perhaps the control room is still damaged).

A frustrated Wolverine storms off after the Danger Room session to grab a beer.

In a scene I've always liked, Cyclops notes that the new X-Men may never mesh as well as the original X-Men did, but that he's not sure that's even a desirable goal anymore.

Professor X, who was never properly debriefed about Phoenix's action inside the M'Kraan crystal following issue #108, reads the Shi'ar account of the events, and realizes just how powerful Jean has become, motivating him to return to Earth.

It is revealed that Jason Wyngarde has been at Jean's side since she "left the safety of Xavier’s mansion", appearing to her, aside from as himself (in issue #122), in various guises such as a priest and a hunky vacationer, in order to get to know her better and instinctively gain her trust, so that he can eventually turn that trust into love. 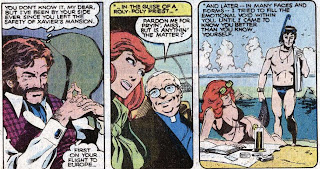 After twenty issues, Moira learns that Mutant X's cell has been breached, as shown in issues #104, and that he has escaped. 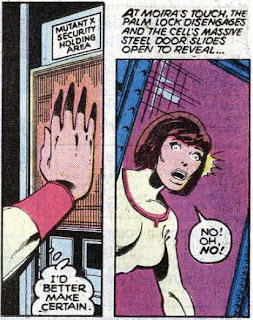 One last grumbling about the "believed dead" plot: this issue makes it clear that, through Jean, the other Muir Island residents believed the X-Men to be dead. While we could assume their grief was addressed off panel, both Havok and Moira seem little broken up by the deaths of their brother and boyfriend, respectively. 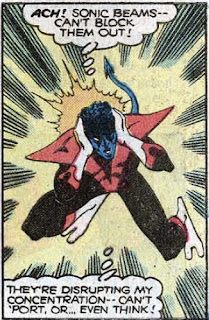 Aboard his high tech orbiting asteroid base he built himself, Magneto is watching old footage of his battles with the X-Men via reel-to-reel tape. 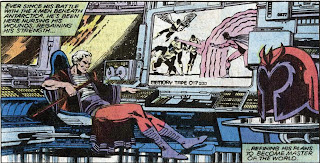 Claremontisms
More German expressions from Nightcrawler, who is quickly outpacing Banshee and Colossus in the field of "random expressions that denote the character's nationality": "mein freund" (my friend), "ein geist" (a ghost), and "das Bestie" (the Beast).

Artistic Achievements
Inker Terry Austin, an avowed Popeye fan, sneaks the sailor into the background of a gathering on the Shi'ar Imperial Center. 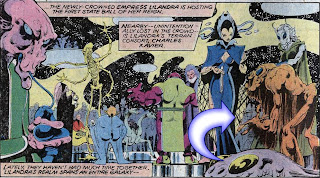 Young Love
With her brief appearance as one of Arcade's captives last issue past, Colleen Wing and Misty Knight's presence as supporting members of the book's cast comes to end. Coupled with the looming reunion between Scott and Jean, so too has Cyclops and Colleen's brief romance ended.

It's in the Mail.
The letters page details a media storm that sprang up in the wake of issues #120-121. 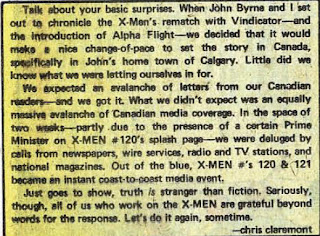 John Byrne on why Misty Knight never mentioned seeing Jean to Cyclops
"This question has been asked many times, and my answer is always the same: 'Why would she?' Misty Knight would not have any way of knowing Scott and the others thought Jean was dead."

Nickerson, Al. "Claremont and Byrne: The Team that Made the X-Men Uncanny." Back Issue August 2008: p6.

Chris Claremont on Misty Knight and Colleen Wing's involvement in X-Men
"Misty and Colleen's appearances in The X-Men were for reasons that had nothing to do with the X-Men. I was bounced off Power/Fist [Power Man and Iron Fist]. Ed Hannigan didn't want either of the women in the book, and I said, 'Fine, can I take them to X-Men?,' and he said 'Sure.' You see, I pretty much created them. But Jo [Duffy, later Power Man and Iron Fist writer] - quite rightly - demanded them back."

John Byrne on coming up with the idea that Magneto was Quicksilver and Scarlet Witch's father
"The first time I drew Magneto with his helmet off it struck me that that he looked like Quicksilver and looking back over all the years at all the stuff that happened between them, it suddenly seemed a more logical thing, since I hated the Whizzer thing. So I said, "Why don't we do this?" It began with Mark Gruenwald and me kicking things around for a Quicksilver Marvel Premiere, and of course it ended up being in the Avengers and one page of the X-Men. And it was never supposed to be flat-out that that was the relationship."

Editor Roger Stern on who came up with the idea to establish Quicksilver and Scarlet Witch's parentage
"It's been so long ago, but either John Byrne, Mark Gruenwald, or Steven Grant - or some combination of those folk - suggested that Magneto was the father Wanda [Scarlet Witch] and Pietro [Quicksilver]. It was my intent that the readers, but never the characters, would know ... and we've all seen how long that lasted."

Nickerson, Al. "Claremont and Byrne: The Team that Made the X-Men Uncanny." Back Issue August 2008: p5.

Teebore's Take
I've always had a fondness for these types of issues, and this is one of the best. Like issue #122, it is another "quiet" issue, and another quintessential Claremont story, one without a real plot of its own, but rather an assemblage of character moments and subplots that serve to wrap up or setup existing or future plots. Here, Claremont and Byrne not only bring to an end the X-Men's protracted belief that Phoenix and Beast are dead (and vice versa) and setup the next story, but they also continue to lay the groundwork for the story after that. Though the villains of the next two stories appear, other than a few training sequences, there's little action to speak of. In many ways, it is the last chance for the X-Men to catch their breath, and the last chance for Claremont and Byrne to put all the pieces on the board before their big epic. It is the quiet before the storm, a storm that will rage, almost nonstop, for the next twelve issues. When it's done, the X-Men, and superhero comics, will never be the same.

Next Issue
The debut of Proteus!
Newer Post Older Post Home
Posted by Austin Gorton at 8:00 AM