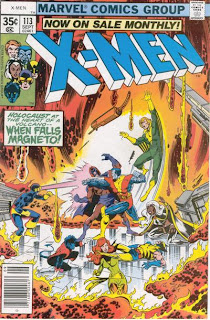 In a Nutshell
The X-Men break free and defeat Magneto, but get caught in the destruction of Magneto's volcanic lair.

Plot
In the week since capturing the X-Men, Magneto has been carrying out a series of raids against research complexes in Australia and New Zealand, pilfering their technology. On the island of Kirinos, a vacationing Professor X worries about the X-Men as he's lost his telepathic rapport with them. Back at Magneto's Antarctic base, the X-Men are tended to by Nanny. After she leaves them for the morning, Storm, who has spent the last several days building her control and observing Nanny, manages to move her head enough to drop her headdress containing hidden lockpicks onto her lap. Though Magneto's chairs force the X-Men to function at the level of an infant, at six months Storm possessed the coordination of a young girl. Picking up a lockpick with her mouth, she attempts to pick the lock on her shackles, recalling her childhood training as thief in Cairo. Just as she's about to free herself, she loses control of the lockpick and Nanny returns, replacing a devastated Storm's headdress.

Later, Magneto is working aboard his rebuilt Asteroid M when he receives an alert of a malfunction at his Antarctic base. He returns to the base, confidant he can defeat the X-Men should they have escaped, to find the lights out and a damaged Nanny racing in circles. Just then, the X-Men attack, Storm having eventually succeeded in freeing herself and the others, hitting Magneto with a coordinated attack that gives him no respite. Ignoring Cyclops' orders, Colossus attacks Magneto directly, pummeling him with such force that bones break, giving Magneto no time to use his magnetic powers against him. However, the X-Men's attack is halted as lava begins to flow into the base, the battle having damaged the control console which kept the lava at bay. The distraction allows a heavily wounded Magneto to break free. Just as he departs, a massive eruption claims the base and, Magneto believes, the X-Men. Moments later, Phoenix emerges with Beast, and collapses from the strain. Beast attempts to carry her to safety, but they are stuck on foot in the Antarctic in the middle of a blizzard, and within minutes he too collapses.

Firsts and Other Notables
Magneto's orbital base Asteroid M appears for the first time since issue #5, having been recently rebuilt by Magneto thanks to the increase of his power brought on by Erik the Red's restoration of his adulthood.

Claremont and Byrne are credited as co-plotters for the first time, and they will continue to be credited as such for the duration of their run together, leading to some disputes down the road over who was responsible for coming up with what in certain stories. Byrne also pencils the cover for the first time since his run began.

Roger Stern (the writer of one of my favorite runs of Avengers) is credited as editor with Jim Shooter credited as Editor-in-Chief for the first time, Marvel having recently restructured its editorial offices so that a group of editors now oversee a handful of books apiece with the Editor-in-Chief overseeing them (and the overall quality and cohesiveness of the Marvel Universe), instead of the Editor-in-Chief being responsible for editing all of Marvel's books (as had been the practice since Stan's days).

Jim Shooter remains a controversial figure within the comic book industry. A forceful personality, he had strong beliefs about what made good comic books, and what made comic books sell, and wasn't afraid to use his position to put those beliefs into action, stepping on creators' toes along the way, sometimes forcing them to change things with which he disagreed (we'll eventually see one notable instance of this with X-Men). At the same time, under Shooter, deadlines were met, books shipped more or less on time, sales reached new highs and the sense of the Marvel Universe as a shared world, in which the events of one comic could be felt in another, was stronger than it had been since the days of Stan Lee, and possibly even stronger.

A TV reporter references the disbandment of the Fantastic Four and the Champions, as well as the Avengers being under house arrest, referring to events in Fantastic Four #191, Peter Parker, Spectacular Spider-Man #17-18 and Avengers #181.... Though the FF will eventually get back together, the Champions will remain disbanded, their short-lived series having come to an end. The Avengers will have their security clearance and the privileges thereof restored, but in the meantime, they'll famously have to take a bus to face off against the reality-threatening villain Korvac.

A Work in Progress
Storm's background continues to expand, as we learn more details of her childhood as a thief on the streets of Cairo, expanding her skills as a lockpick (previously established in issue #103). We also learn that she keeps a set of lockpicks in her headdress, and that at six months old she had the coordination of a young girl, further suggesting that Storm may be extraordinary in some way beyond her mutant power.

That "bubble of magnetic force" mentioned as keeping the lava out of Magneto's base last issue "pops" as a result of the X-Men's battle with Magneto, leading to lava flooding the complex and facilitating Magneto's escape.

Added pages in the Classic X-Men reprint extend Magneto's Asteroid M interlude, adding references to Magneto's backstory that hadn't been around when the original issue was released. These pages are drawn by Kieron Dwyer, who is John Byrne's stepson.

The Classic X-Men backup, meanwhile, is a brilliant story which helps depict the transition of Magneto from Holocaust survivor (part of his more modern backstory) to the megalomaniac super-villain of issue #1, and features some elements that (intentionally or not) showed up in the portrayal of Magneto in the recent X-Men: First Class film.

Claremontisms
Claremont once again skips past exposition in favor of dropping the reader right into the action; instead of showing us Storm trying a second time to free herself, then succeeding and freeing the other X-Men, then the X-Men formulating their plan for attacking Magneto, Claremont cuts from Storm's initial failure to Magneto arriving at the base and getting attacked and uses a Storm thought bubble to fill in the narrative gap. 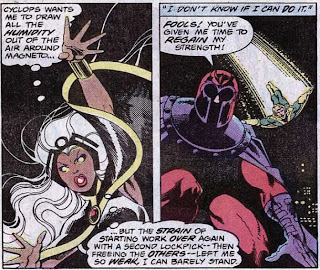 Claremont also unveils one of his favorite narrative devices in this issue, what Jason Powell refers to as, "defeat snatched from the jaws of victory", as the X-Men are on the verge of defeating Magneto only to have that victory taken away from them at the last minute by circumstances outside of their control. It's a trick we'll see Claremont use again in the future. 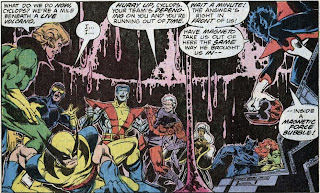 Artistic Achievements
When Magneto arrives back at his base and is first attacked by the X-Men, he is hit with four different energy blasts at once (from Cyclops, Banshee, Storm and Phoenix). Byrne draws the effect so that the four attacks form an "X" with Magneto at the center. 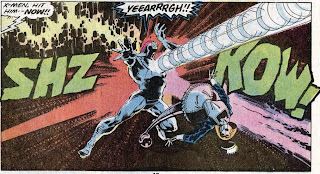 Young Love
Xavier is vacationing on the Greek island of Kirinos with Lilandra, a place he had previously gone in order to mend his broken heart following his break-up with Moira, which makes it an odd place to bring his current girlfriend...

While on Kirinos, Xavier and Lilandra are appropriately lovey-dovey. 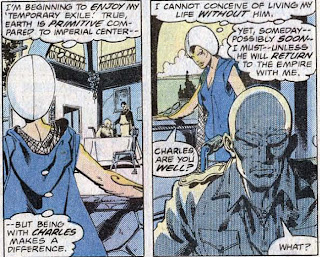 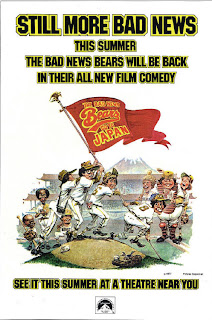 It's in the Mail
A response to a letter regarding issue #109 states that according to Claremont, Xavier wiped his presence from the minds of everyone at Alpha base when he recruited Wolverine in Giant Size X-Men #1, making Wolverine's quitting and joining the X-Men look all the stranger to his former superiors, further explaining why they sent Weapon Alpha after him.

John Byrne on drawing covers
"Shooter didn't think I was good enough to do covers. Somehow, I was good enough to do the insides, but not the covers...the first cover that he let me do was the one where the X-Men are inside Magneto's volcanic lair and even then Marvel sent me a sketch to follow. Here's a little story...: Marvel had sent me a cover sketch for an issue of Marvel Two-in-One and I drew that exactly what was in the cover sketch. Shooter later decided that the cover sketch was really lame, and that I should have fixed it. He said, 'If we ever send you a lame cover sketch, you should fix it! Make it more dynamic! Make it this! Make it that!' So he got Walt Simonson to ink and re-draw my cover for Marvel Two-in-One. Then we cut to Marvel sending me a cover sketch for X-Men #113. The sketch has this giant volcano and these tiny little X-Men, and I said, this is no good, the X-Men are like ants on this cover! So I made them bigger and sent the cover in. Shooter looked over the cover and said, 'When we send you a cover sketch, you draw what we send you,' and made me re-draw the cover."

John Byrne on plotting the book with Claremont
"...We got to the point where we were doing what we would call 'phone plots'. I think this was while Roger Stern was editor. Chris and I would talk about the story and then he'd talk to Roger, and I'd talk to Roger, and then I'd draw whatever we'd worked out, and off it would go back to Chris to script."

Teebore's Take
This issue is my go-to example of superhero team action done right. All too often, superhero teams attack their villains one by one (as the X-Men did last issue), showcasing each individual members' abilities and eventually wearing down their foe. Last issue, Claremont made a point, via Cyclops and Magneto, that those kind of tactics won't work against Magneto, and offers his alternative approach here (ably rendered by Byrne and Austin). For the first time, the X-Men truly work as a team against Magneto, combining one-on-one attacks with group attacks, each member contributing based on their skills. With Phoenix telepathically linking the team, the X-Men first hit Magneto with a combined assault to knock him off balance. Storm remains in the background, using her power to dehydrate Magneto as Banshee attacks to provide cover for Wolverine, who gets close enough to slash Magneto before giving way to a telekinetic assault by Phoenix. Nightcrawler and Beast work together to remove Magneto's helmet, leaving him open for the final blow just as base begins to fall apart. Though Magneto ultimately escapes, the battle itself remains a brilliant piece of superhero action.
Newer Post Older Post Home
Posted by Austin Gorton at 8:00 AM