This will probably be my last regularly-scheduled (such as it is) "Last Week In TV" post until the 2011-2012 TV season kicks off next fall. I've still got a ton of stuff leftover from the end of the last season to catch up on (like the last four Parks and Rec episodes and the rest of The Event) as well as some summer-debuting shows (like Burn Notice and that one with Noah Wylie fighting aliens) that will likely prompt at least a few posts over the next few months, but I doubt I'll be watching enough stuff worth writing about to promise a weekly post. In the meantime, let's wrap up the 2010-2011 season with a couple of finales.

(I am curious if there's anything you guys are looking forward to watching this summer, so if there is, let me know in the comments). 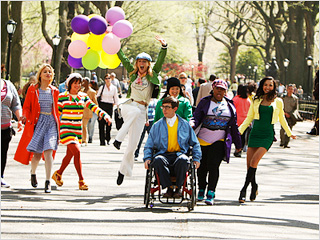 Thankfully, Glee ended its second season with a solid finale capping off a consistently solid run of final episodes. While this episode certainly had its problems (particularly with pacing on the front half, making the episode feel like it should have been a two-parter or longer, and shoving the Finn/Rachel relationship back to center stage) it was one of the best kinds of Glee episodes, the ones that examine the bittersweet difference between teenage dreams and adult realities.

For a show that has no problem tossing characterization or continuity out the window in favor of the plot-du-jour, this episode also contained some nice callbacks to Glee history. There was Kurt's obvious reminder of how New Directions was once just six misfits and now they're all in New York, but also the scene between "the popular girls" that illustrated how far all three had come since they joined the club as, basically, spies for Sue, and the duet between Rachel and Kurt on the Wicked stage, which illustrated how much their relationship has changed since they competed against one another via a different Wicked song (in fact, their friendship and mutual respect for one another as the two members of the club most determined to "make it" is one of my favorite things to come out of this season).

Other thoughts:
As much as I don't really care about the Rachel/Finn relationship (especially since she spent most of the back half of the season trying to win him back but now doesn't want him, because, hey, the script says so), I do like the idea that Rachel's future is the third side of the triangle instead of Quinn/Jesse/Puck/whomever. It speaks both to the show's overarching theme and Finn's character as someone who is talented and would like to leave town one day but maybe isn't quite as talented and driven as would be necessary to do so.

I also really liked their duet culminating in an onstage kiss, especially the fact that no one in the audience knew how to react until Will started some mild applause and that it (realistically) cost them the competition. It's the kind of dumbass thing teens would do, and I'm glad it had real consequences for them.

So Will's song was wildly self-indulgent (especially since I think it was a song off Mathew Morrison's album) but what the hell was up with that guy randomly telling him, "you got it, kid!"? I mean, the fact that it wasn't a dream or something is ridiculous enough, but then the show never comes back around to deal with it? We're just supposed to take that at face value? Really?

Quinn's "I'm going to destroy the glee club!" insinuations from last episode really amounted to nothing.

Stuff I Shouldn't Worry About: I know I mentioned this after the last episode, but really, you kids don't deserve to win Nationals if you're honestly writing your songs the day before the damned performance! Also, does Times Square really have a set of bleachers smack dab in the middle of it?

Favorite Song: Still not a huge fan of the original songs (though I enjoyed them well enough, especially "My Cup, which was kinda awesome) and just about everything else was unfamiliar to me, aside from the Wicked song and "Belle Notte". I'll go with "Belle Notte" since it kinda cracked me up.

Rachel: The guy did seem crazy. He charged my credit card by swiping it through his butt crack.

Mercedes: Did you know New York City was built on top of Old York City?
Tina: I'm pretty sure that's not true.

Kurt: I feel like Eloise.
Brittany: I have pills for that.

Gooslby: I hate my kids. I would literally whip them if I could.


Community: For A Few Paintballs More 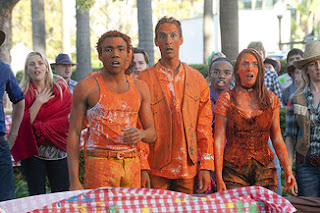 While part 1 was a very specific parody of spaghetti Westerns, this episode largely ditched that in favor of something more generic. It started out as a loose Star Wars parody, with an opening crawl and Abed calling dibs on the Han Solo role (which he followed through with throughout the episode, including a hilarious scene between him and Annie (with Shirley as C-3P0) that re-created Han and Leia's flirtation aboard the Millennium Falcon during Empire Strikes Back) but the episode never quite committed to it, instead expanding into a more general parody of action and war movies, which, despite the shenanigans, wisely allowed room for characterization. In fact, the third act was almost entirely hi-jinks free, and was used largely to wrap-up the "Pierce is an ass" ongoing subplot (at least for the season). Chevy Chase isn't going anywhere (as far as I've heard) so the cliffhanger, such as it is, isn't all that intense, but it does open some interesting doors for where the character could go in season three and helps illustrate that this show cares just as much about character development as it does wacky paintball antics. That we could get both in one twenty-two minute episode is a testament to how awesome this show continues to be.

PS Is Annie randomly kissing one of her friends going to be a recurring season finale motif?

City College Dean: You haven't seen how mean this dean can be...ean.

Abed: I'm calling dibs on the Han Solo role before Jeff slouches into it by default.