Weaknesses and Achilles' Heels
The color yellow and blows to the head. 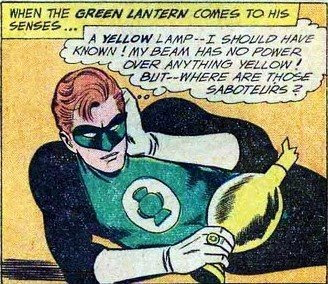 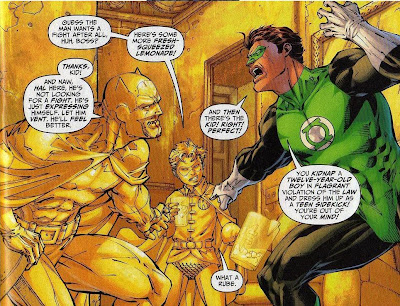 Gadgets and Accessories
A Green Lantern Corps (GLC) ring and accompanying Green Lantern power battery. The ability to wield the Green Lantern ring is powered by the strength of the bearer's will; the ring itself must also be recharged periodically by placing it in a Green Lantern that's remotely connected to the GLC's central power battery. Fear in the ring bearer will create an inability for the ring to affect anything colored yellow.
Friends and Allies
John Stewart, Guy Gardner, Kyle Rayner (fellow members of the Green Lantern Corps from Earth), Green Arrow (Oliver Queen, his best friend), the Flash (Barry Allen, his other best friend), Carol Ferris (his one-time boss and "Lois Lane", and occasional Star Sapphire), Pieface (Tom Kalmaku, his politically-incorrect Silver Age Inuit sidekick), the Guardians of the Universe (diminutive founders of the GLC), the Green Lantern Corps, the Justice League. 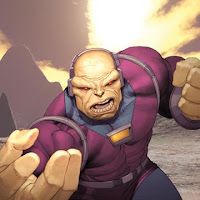 Movies and Appearances
Hal Jordan frequently appeared on the various Super Friends incarnations, in which he once moved the planet to prevent a missile from hitting it, amongst other things. The Green Lantern most modern viewers are more familiar with from the recent Justice League cartoon is John Stewart. And of course, Mrs. Teebore favorite Ryan Reynolds is playing Hal in the just-released feature film. 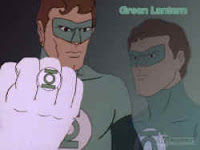 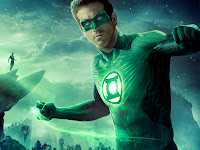 One-Sentence Origin
When Air Force test pilot Hal Jordan comes across the crashed ship and dying form of Green Lantern Abin Sur, he is chosen due to his ability to overcome great fear to replace Sur as the Green Lantern responsible for the safe keeping of Earth and the surrounding sector of space.

Memorable Moment
"Emerald Twilight", Green Lantern (vol. III) 48-50 (Jan.-Mar. 1994): After failing to prevent the uttter destruction of his hometown, Coast City, at the hands of Mongul, Hal goes insane with grief, allowing the fear entity Parallax to take control of him, leading Hal to slaughter all the existing Green Lanterns and Guardians in an effort to use their power rings to restore Coast City to life. 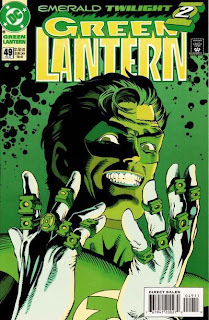 Fun Fact
In the wake of the recent Sinestro Corps War storyline, each color in the spectrum received its own emotionally-powered Lantern. In addition to the willpower-fueled Green Lanterns and the fear-inducing yellow lanterns of the Sinestro Corps, there are (or will be) the rage-filled Red Lanterns, as well as Orange (avarice), Indigo (compassion), Violet (love), Blue (hope) and Black (death) lanterns.

Teebore’s Take
The original Green Lantern (Alan Scott) created in 40s, was a solo hero with the powers he gained from the Green Lantern being mystically-based. When DC kicked off the Silver Age in the late 50s by reimagining their existing characters with more sci-fi trappings, the mystically-powered vigilante Green Lantern became a space cop with a ring created by alien technology. And thus was created one of my favorite comic book concepts of all time.

Because I like the concept of Green Lantern far more than any one particular character, I've always been a bit mystified by the rabid fanbase Hal Jordan has, particularly because the character in and of himself isn't all that interesting. But when Hal was replaced by Kyle during a time when the trend in superhero comics was to replace existing, seemingly old-fashioned characters with younger, hipper and often (but not in Kyle's case) darker versions of the characters, Hal's fanbase cried foul. The most vociferous of these fans formed a group called H.E.A.T (Hal's Emerald Attack Team) and loudly (and in some cases, profanely) urged DC to bring back the "one, true Green Lantern." Ron Marz, the writer of the issues which saw Hal transform into Parallax and kill his peers in the Corps felt a lot of heat as well (pun intended), depsite the fact that he was more or less merely brought onto the title to execute the editorially-mandated storyline.

In time, DC began to slowly rehabilitate Hal, presumably in response to fan outcry. After a stint of time spent as the villainous Parallax, Hal sacrificed himself to save the planet, and was later made the host of the Spectre, DC's Spirit of Vengeance. But the fans wanted Hal back as Green Lantern, not the Spectre, and eventually, fan-turned-comic writer-turned-DC Grand Poobah Geoff Johns made Hal a Green Lantern once again, retconning the events of "Emerald Twilight" so that Hal didn't become Parallax but was possessed by Parallax due to his emotionally weakened state, and thus wasn't entirely responsible for his actions (Johns also managed to make the Silver Age-required yellow vulnerability kind of cool and came up with an explanation for the stylin' salt-n-pepper temples Hal was sporting before becoming Parallax). 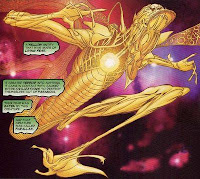 The whole H.E.A.T thing has always seemed like a whole lot of unnecessary hubbub. I have nothing against Hal Jordan and don't mind seeing him back as DC's preeminent Green Lantern, but I also had nothing against Kyle taking over the mantle. I certainly don't consider Hal the paragon of everything that is great and right, and ever will be, about superhero comics, the way some people seem to do. What matters to me, far me than who is slinging the ring, is the concept behind the Green Lanterns: space cops with magic rings and a bitchin' oath:
"In brightest day, in darkest night,
no evil shall escape my sight!
Let those who worship evil's might,
beware my power...Green Lantern's light!"