To Better Know A Hero: Hawkeye 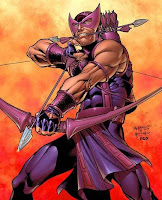 Powers and Abilities: Hawkeye is the best archer in the Marvel Universe; trained in hand-to-hand combat by Captain America; Carny trickery.
Weaknesses and Achilles’ Heels: blonds, brunettes, redheads (but especially blonds); Hawkeye also suffered, at one point, from a slight inferiority complex.
Gadgets and Accessories: An assortment of custom-made bows and not-quite-as-goofy-as-Silver-Age-Green Arrow trick arrows; Hawkeye is 80% deaf in both ears and wears specially designed miniature hearing aids to compensate. 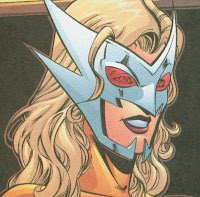 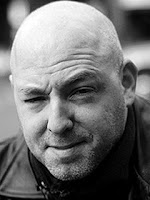 Movies and Appearances: Hawkeye has yet to headline a movie or TV show, but he was a regular on the Iron Man cartoon in the 90s as well as the shortlived Avengers Unlimited. There's also some internet speculation/wishful thinking that he might make an appearance in the upcoming Avengers movie. 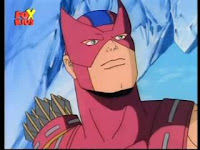 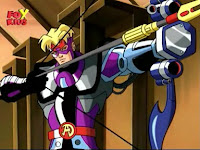 One-Sentence Origin: Raised in a traveling carnival and trained by Trickshot to hone his natural archery skills, Hawkeye attempted to make a name for himself as a costumed hero, but ended up inadvertently battling Iron Man before putting his short-lived villainy aside to become a mainstay of the Avengers.

Memorable Moment: Avengers Annual 16 1987: Hawkeye, while leader of the West Coast branch of the Avengers, gets caught up, along with all his Avengers teammates, in a cosmic game being played between an "Elder of the Universe", the Grandmaster (who is obsessed with games), and Death, with the fate of the universe at stake. The Avengers face off against the Legion of the Unliving, a group comprised of their worst dead enemies, resurrected. Only Captain America and Hawkeye make it through the gauntlet, staving off the destruction of the universe. But then the Grandmaster tells them they have to fight the Legion again, only with their deceased teammates now against them as well. Hawkeye's had enough and challenges the Grandmaster to a simpler game (click to embiggen): 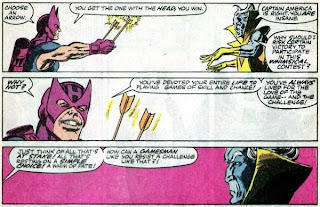 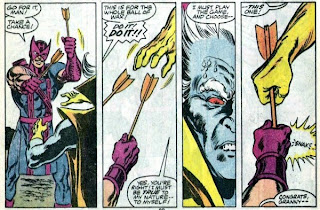 The Grandmaster loses, and is distracted enough that Death gains the upper hand and sends the Grandmaster packing (she also ressurects Hawkeye's fallen teammates). But how did Hawkeye win?

Once a carny, always a carny...

Fun Fact: Hawkeye petitioned the Avengers for membership by breaking into their headquarters and tying up their butler, later freeing him via archery as a show of his skills. Iron Man, his one time foe, eventually sponsored him for membership. 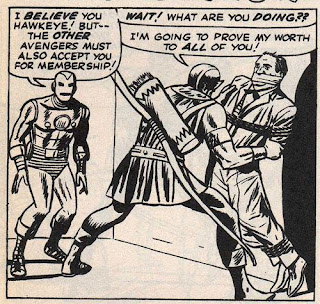 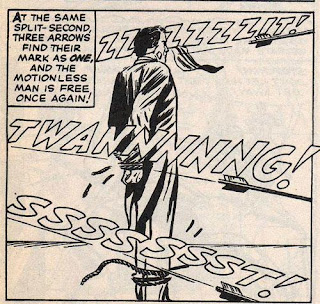 Teebore’s Take: Marvel, moreso than DC, has a long-running tradition of converting its villains into heroes. Hawkeye is one of the earliest examples of that, going from reluctant-villain alongside Communist spy Black Widow (with whom Hawkeye was infatuated and would herself later reform and join the Avengers) to Avenger alongside fellow reformed-villains Quicksilver and Scarlet Witch in the Avengers first big lineup shake-up, a team known as "Cap's Kooky Quartet." 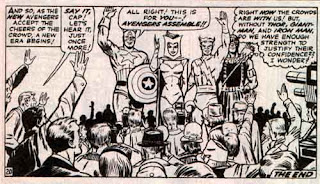 I've always enjoyed Hawkeye's unique and consistent character development throughout the years. Shortly after joining the Avengers, Hawkeye was the resident hothead, bristling at Captain America's leadership, incorrectly believing he could do a better job. Eventually, he came to respect Cap, forming the basis for a unique and long-running friendship. For a time, Hawkeye struggled with insecurity, worrying he was overpowered by his fellow Avengers. For a time, he took Hank Pym's growth serum and operated as the super-strong, size-changing Goliath. After a battle which Hawkeye won exclusively by relying on his own skills, he embraced his archery skills and struck out on his own as Hawkeye once more, eventually returning to the Avengers as a more confident and capable person.

This new-found confidence led him to his wife and a leadership position starting up the Avengers' West Coast branch, a position at which he excelled (the less said about his mischaracterization during this period regarding his reaction to his wife's rape the better). Hawkeye so loved being the leader that years later, after the West Coast branch folded, he left the Avengers and forced himself onto the Thunderbolts (a group of villains attempting to reform), becoming their leader, determined to use his past experiences to help them travel the path of redemption.

Of course, Hawkeye is also endearing because of his role as the "normal Joe" who not only holds his own in a group filled with people far more powerful than he is, but often leads those same people. There have been a handful of fun stories through the years featuring Hawkeye facing off against opponents way out of his weightclass (such as the one mentioned above) and Hawkeye always finds a way to come out on top. 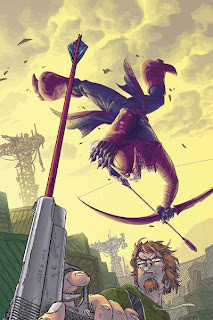