Yesterday, in honor of Inauguration Day, Krispy Kreme Doughnuts gave out a free doughnut to every customer to honor "American's sense of pride and freedom of choice." Now this may seem to simply be a shameless promotion to get people in their store, but Judie Brown of American Life League found a more sinister motive behind Krispy Kreme's supposedly innocent campaign. It's obvious if you read what they said closely:

"American's sense of pride and freedom of choice."

No, I'm not talking about the grammatical error. Read it again.

Freedom of CHOICE. You know, pro-CHOICE. As in pro-ABORTION!!! According to Judy Brown, Krispy Kreme is unequivocally endorsing abortion. The horror!

You can read the whole story here: http://www.chicagotribune.com/news/nationworld/chi-talk-donut-mon-nujan19,0,7766964.story

Now, I'm sure you're expecting me as a lefty liberal whack job to blast this lady for at the very least overreacting and at the very most being a paranoid freak. You're assuming I'll make some crack about NASA astronauts having to "choose life" instead of "aborting a launch." But you'd be wrong. You see, I could ASSUME she's an overreacting idiot, but I decided to do some investigating on my own.

I visited a Krispy Kreme yesterday. Of course, I was a day late for the Inauguration Day free doughnut. However, they did have another promotion. It was called the "Abort Your Hunger Deal." Interesting choice of words. It was a pretty good deal, though. You could get a dozen doughnuts for half off. The only odd thing was that when I received the doughnuts the box had a wire hanger attached to it. 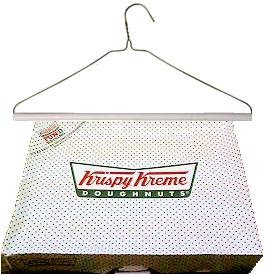 I'm not sure what that's all about.

Anyway, the doughnuts were still pretty good. The only thing I didn't like was the jelly doughnut I ate. The problem was the doughnut wasn't filled with jelly. Instead it was filled with... 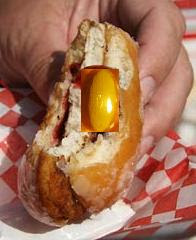 The morning-after pill!!! Now I was suspicious. I decided to pretend to be a potential investor and scheduled a meeting with a Krispy Kreme executive, Roy Vincent Wade.

When I arrived at the executive offices of Krispy Kreme things seemed normal. The only odd thing was that their TVs constantly played "Dirty Dancing." But I had no time to watch because Mr. Wade was waiting for me. I introduced myself to the executive and told him that I had just purchased the "Abort Your Hunger Deal."

"Excellent!" the well dressed Mr. Wade exclaimed. "We are overjoyed you chose to exercise your God-given right to abort........hunger."

There was something odd about Mr. Wade, but I couldn't quite put my finger on what it was.

Regardless, I mentioned my interest in investing.

"Yes, and we could really use some venture capital right now. We're seeking to branch out into other areas. Check out this brochure."

Mr. Wade looked around for the brochure but couldn't find it.

"I'll be back." Mr. Wade left the room but soon returned with the brochure.

Mr. Wade passed me the brochure and I perused it. Apparently Krispy Kreme Doughnuts wants to move past the doughnut business and want to start building Krispy Testes Vasectomy Clinics.

"Fine, Mr. Roy V. Wade, it seems that your company has some sort of anti-reproduction obsession."

"I will not sit here and listen to these lies!" Mr. Wade rose to his feet. "Krispy Kreme Doughnuts has no anti-reproduction or anti-human agenda. Until you terminate that line of thinking we have nothing to say to each other. Good day, sir."

With that I was escorted out of the building. However, I wasn't quite done. I needed more information.

I know a thing or two about computers. So I hacked into Krispy Kreme's corporate intranet and in doing so I have fallen down the rabbit hole. I saw things I can't unsee. Heard things I can't unhear. Know things I can't unknow. So stop reading now unless you want to journey through the looking glass!

From secured files on the Krispy Kreme server, this is what I found out:

Apparently, in the future, an artificially intelligent military computer known as "Skynet" will come on line. Skynet will view humans as obsolete and attempt to destroy us. Skynet's first act will be to orchestrate a nuclear holocaust. Afterwards, humanoid robot killing machines known as "Terminators" will be dispatched to eliminate the last remnants of humanity. A human resistance will form under a legendary leader known as John Connor. The resistance will prove to be too strong for the robot army. Thus, as a last resort, Skynet sent a Terminator back in time to ensure that John Connor would never be born.

The Terminator sent back in time created the doughnut franchise we know as Krispy Kreme Doughnuts. On the surface this restaurant's purpose was to simply provide tasty baked goods to the public at a low, low price. But secretly, this was a company with the lone, sinister goal of encouraging humanity to stop procreating. It was the hope of the founding Terminator that Sarah Connor, John Connor's mother, would fall under the trappings of Krispy Kreme and either A) Use birth control or B) Get an abortion. This plan failed, however, when Sarah Connor turned out to be a Dunkin' Donuts gal. And Dunkin' Donuts is all about unprotected sex.

Refusing to admit complete defeat, however, the Terminator decided that Krispy Kreme Doughnuts could still be used to further the robot uprising cause in other ways. Basically, they could use their anti-pregnancy restaurant to keep other humans from reproducing. The less humans born, the quicker it will be to eliminate them all. So Krispy Kreme created more franchises to subliminally promote their pro-abortion message.

And if you don't believe me, then you come up with a better explanation as to why the hell someone would think a doughnut shop using the term "freedom of choice" in a promotion on Inauguration Day is some sort of code for being pro abortion.