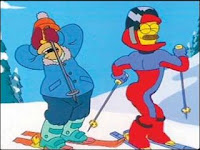 AKA: Lisa takes charge of the house when Marge ends up in the hospital (or the one with "stupid sexy Flanders").

The Setup: Homer and the kids interrupt Marge's attempt to get rid of their junk, leading to an impromptu ski trip that culminates with Marge stuck in the hospital with a broken leg.

Bart: At Sunday school, they said the lepers were cured by some bearded dude.
Homer: Jesus?
Bart: Yeah, that sound right.
Homer: Oh, I think we're on the outs with him. But I know someone who's even holier than Jesus.

Teebore's Take: Back to this season's form, unfortunately. Another uneven, scattershot episode with remarkably few funny moments yet nothing bad enough to get too worked up over. My favorite part is towards the beginning in which a cross-country skiing Lisa is attacked by a pack of vicious deer, only to be rescued by a park ranger who admonishes Lisa for disturbing the seemingly idyllic and innocent deer. As the ranger speeds her away on his snowmobile, she looks back once more to see the deer barring their fangs at her. Aside from that, a fairly dull, unfunny episode.

8-year-old Lisa taking charge taking charge of the household while 40-year-old Homer acts less mature than 10-year-old Bart is pretty over-the-top. Toss in Lisa's Lucille Ball hallucination and her convincing Homer and Bart they have leprosy resulting in the pair getting sent off to Hawaii, and you've got a pretty zany episode.

Homer is less of a jerk and more an immature brat throughout, but he is pretty much an unhelpful ass regardless of age.