AKA: Bart becomes a faith healer

The Setup: A failed prank at his college reunion leads to Homer getting a metal pail stuck on his head until a faith healer named Brother Faith removes it.

Homer: I'm beginning to think this alumni party was just a ruse to get our money.

Brother Faith: ...God gave you the power.
Bart: Really? Huh. I would think that He would want to limit my power. 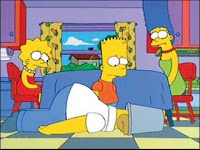 Teebore's Take: I recall not liking this episode much, but found it more enjoyable upon re-watching it in light of the season on the whole. It is a surprisingly well-constructed episode in which Homer's college reunion antics lead into Bart's turn as a faith healer, with the two threads culminating at the end during the big college homecoming football game and Bart's role in healing the star player. An over-the-top moment at the end aside, the episode really only suffers from failing to explore or satirize faith healing, with only the expected skeptical comment from Lisa and Milhouse's bone-breaking faith in Bart's abilities offering any kind of commentary on the practice. Aside from that, this is a well-structured, fun episode that almost feels like it belongs in another season.

Not much more than what can be expected at this point in the season in an episode dealing with faith healing, but the real kicker (pun intended) comes at the end, in which Springfield U's injured star kicker, after being "healed" by Bart, comes back on the field to attempt a game-winning field goal. He kicks the ball, but it only makes it through the uprights when the bottom half of his leg, severed by the kick and flying through the air, unbelievably kicks the ball upright again just as it appears to be falling short.

Homer's insistence on pranking the dean and his drunken antics at the homecoming game is more befitting his simple-minded buffonery from the classic "Homer Goes to College" than his more-recent jerk-assery.
Newer Post Older Post Home
Posted by Austin Gorton at 4:33 PM