Lost 5x01: Because You Left 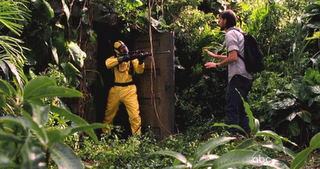 **As always, if you haven't seen the episodes yet, spoilers ahead.**

Time is a funny thing. It seems like just yesterday that I was typing up my post on the finale of season four, and January 2009 seemed eons away. Now, here we are, and those eons have passed in what seems like a flash.

Which is, of course, my ham-fisted attempt to segue into a discussion of Lost's fifth season premiere, which is all about time and time travel. It hurts my head, but man, do I love it.

Like the best season premieres, Because You Left sets the table for the upcoming season, reminding us of where the main characters are and the conflicts which lie ahead: the Oceanic Six need to get back to the island, Ben is helping them, some are reluctant to do so, Locke is dead, Desmond is living a life of hedonism at sea with Penny, and everyone on the island is busy figuring out to WHEN, exactly, the island moved. Every major character (except for Lapidus) made an appearance in this episode, but the focus was firmly on the island and the characters still there as they adjusted to their new "time skipping" status. Daniel, in particular, comes into focus as he becomes the only person on the island to fully understand what's happening. 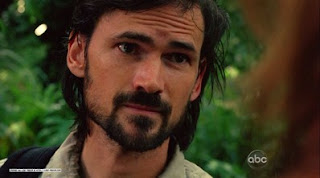 The time skipping of the island doesn't just affect the characters, it also affects the way we, the audience, regard the story. The days of flashbacks and flashforwards seem to be behind us now. Time as we view it on the show now moves as fluidly for us as it does for those on the island. Gone are the neatly assembled dual narratives, showing island events being paralleled by off-island events, events taking place in a different time but still moving forward chronologically. Before, the events on the island were the focus of the story, the time period around which the flashbacks and the flashforwards swirled. Now, the greatest narrative anchor we have are the off-island adventures of the Oceanic Six, while on the island, we're left using story markers such as the drug plane and the hatch to determine "when" the events being depicted take place. Hopefully, this will allow us to see some flashback-style stories (Rousseau still cries out for a "flashback") even if the events are told outside the confines of the traditional flashback structure.

Once again, if you're looking for more (and frankly, better and more thorough) Lost analysis online, I entreat you to check out the following sites, a mere tip of the proverbial iceberg: Nik at Night (my favorite Lost site, whose episode review format I borrow liberally from in my posts), DocArtz, and DarkUFO (a smorgasbord of Lost info and other Lost sites). Entertainment Weekly's Doc Jensen also writes some intriguing and fun analysis of the show.

Sawyer, pounding on the hatch's back door, saying he's the Ghost of Christmas Future.

Tidbits of Note
The season opened in similar fashion to seasons two and three...mysterious figure rising, playing an old song...going about a daily routine.

Obviously, Chang's clock changed to 8:15 when he woke up. 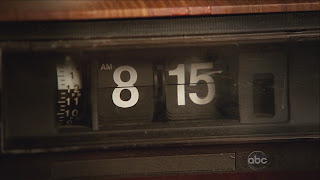 The internet tells me the song playing at the beginning was Shotgun Willie by Willie Nelson.

Sawyer spent the entire episode shirtless. A little gift from Lost to you, ladies. 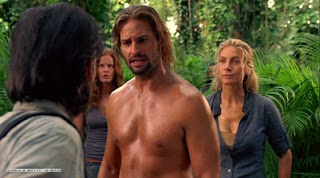 It was raining for Locke after the first time shift...just mentioning it, since weird stuff seems to happen in conjunction with rain on the island.

Daniel compares the movement of time on the island to the skipping of a record, foreshadowed by Chang's record at the beginning skipping.

The compass Richard gave to Locke was the same one he laid out on the table for young Locke in last season's Cabin Fever. The implication seems to be that the compass will act as a kind of constant for Locke, to keep him safe from the effects of time traveling.

Oh, and contrary to Richard's assertion that the compass points to north, when we see it in Locke's hand, it wasn't pointing north. I'm fairly sure its well established that compasses don't work quite right on the island. 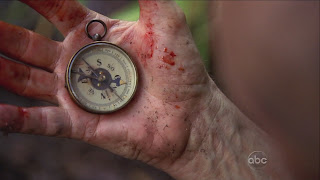 Bio-Hazard Suit Desmond's first words to Daniel ("Are you him?") is the same question he first asked Locke upon meeting him.

Was the Daniel that was hanging with the Dharma Intiative at the very beginning "our" Daniel, or is it a younger Daniel, who time traveled to that event prior to us meeting him last season?

Who sent the lawyers after Kate?

Why did the Others vanish from Locke's side when he time traveled? The Losties all stayed together when the island skipped around times. For that matter, Bio-Hazad Suit Desmond didn't move in time when Daniel did.

It's implied that Sayid is no longer working for Ben, meaning he broke Hurley out on his own volition: why? 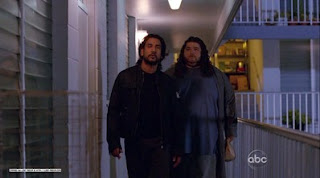 Why is Charlotte already showing the strains of time travel when others aren't? If the compass is indeed Locke's constant, then should the others (Sawyer, Juliet, etc) be worried that eventually they'll start bleeding out the nose, go crazy and die? 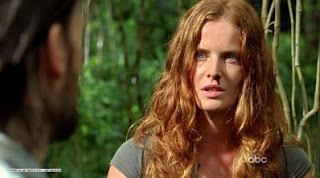 Why didn't Desmond "remember" his meeting with Daniel and instructions to go to Oxford until three years after leaving the island? Why didn't he recall this meeting when he met Faraday last seaon? Because it hadn't happened "yet"? Or is it simply a case of A LOT of significant things happening to Desmond in the time between meeting some strange dude in the strange jungle while living in a strange bunker and then meeting Faraday last season?

Daniel spends the episode asserting that there are RULES to time travel, and Dr. Chang mentions it too: you can't change the past. Last season, Ben admonished Widmore for changing the RULES. Same rules, maybe? Is that why Ben was so shocked when Alex died, because he had been to a future in which she existed?

Who built/installed the Frozen Donkey Wheel, since clearly, Dharma didn't? The same people that built the four-toed statue? 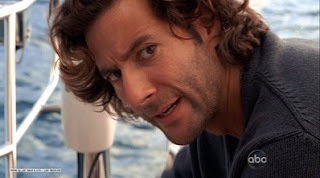