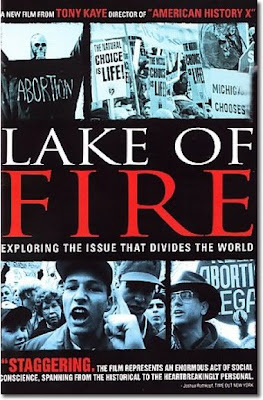 Documentaries, when done correctly, should attempt to be unbiased. On one hand, you have the Michael Moore machine with its blatant entrapment mentality and agenda. On the other side you have a film such as Capturing the Friedmans that attempts to paint an accurate portrait and discover the truth of a situation.

Lake of Fire, for the most part, would be in the second category. Therefore, I’d highly recommend you view it.

This documentary by British filmmaker Tony Kaye showcases both the pro-life and pro-choice movement in visually appealing 35mm black and white film. Even with a running time of about 152 minutes you’ll be glued to the screen as clips of intellectuals defending the urgent need for women to have the choice to avoid an inconvenience to their lives are juxtaposed with graphic images of actual abortion procedures and the rantings of fundamentalist zealots. Don’t take this lightly. When I say graphic, I truly mean graphic. Early in the film we are treated to a doctor rinsing out a colander-esque pan and piecing an aborted baby together to ensure all of the body parts are present.

Tony Kaye spent 17 years filming the opinions and stories of both sides of the issue, sometimes to shocking conclusions such as the case of Paul Hill, a religious leader who condones the execution of abortionists. In the midst of the documentary project, he follows through on his beliefs.

No matter which side you are on, I urge you to watch this film to better understand an extremely relevant social issue. Knowledge is power.