Villain: The cliffhanger's resolution
Sure enough, as we feared at the end of part 1, they cheated on the cliffhanger's resolution in Part 2. I'm okay with the cliche "someone sees the red dot on the target's head so they narrowly avoid the shot" dodge, but, well, when we last saw Bennet lining up his scope on Elle and Sylar, there was no laser sight. And Elle and Sylar were standing. When next we see them, they've finished dancing the horizontal mambo, and THEN the red dot appears. So Bennet...watched them get it on, then added a laser sight, then decided to FINALLY take the shot?

Basically, I think it boils down to the writers knowing they painted themselves into a corner, and instead of addressing it, they dodged it, and rewrote the setup to the cliffhanger to do so. As if the audience doesn't remember how an episode one week ago ended..especially when we're reminded of that ending in the "previouslys" minutes before we see it resolved. I call shenanigans.

Villain: Elle's death
Let's get this one out of the way too. In principal, I don't have a problem with killing Elle. The show needs to restablish the mortality of its characters so that when the stakes are raised, the audience doesn't scoff because we know they won't really kill off anyone.

Having said that, I think it's a shame to lose Elle, who is consistently one of the best acted characters on the show despite being written wildly out of character from one episode to the next as the plot dictates.

And really, if you are going to kill Elle, I'd have much prefered she died at the beginning, getting in the way of a shot fired by Bennet meant for Sylar, and thus resolving that cliffhanger more satisfactorily. Instead she was killed off to punctuate the fact that most of Sylar's character arc this season was (seemingly) a complete waste of time.

Villain: The conclusion (?) to Sylar's redemption arc
Again, in principal, I don't have a lot of problems with Sylar deciding he is, in fact, a villain. That's where he works best, and while I enjoyed some of what went on during his attempted redemption (particularly his too-short partnership with Bennet), I was never 100% on board with the idea that the merciless serial killer of the first season really wanted to be a good guy.

But in practice, the whole thing just seems like a colossal waste of time now, especially since Sylar's motivation to return to the Dark Side seems so muddled. Bennet causes him to doubt the Petrelli's claims of parentage, so he says screw it, and scalps Elle? Okay...It would have worked better if Bennet had shot Elle, and his rage at that and the realization (after his powers return) that he can never have a normal life, especially with Elle gone, make him say it "forget this" to the whole Hero thing. 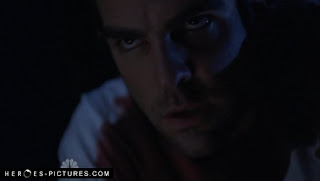 Of course, the way this show deals with character this season, next week Sylar will probably be back to struggling to control his dark side while yearning to be good.

(And this whole "I'm really evil" thing calls into a question a lot of stuff from earlier in the season. I was always under the impression that the whole time Sylar was at Pinehearst, he was playing the good son while remaining loyal to Ma Petrelli, and he'd end up turning on Arthur at a key moment. Hence his saving of Peter when he pushed him out the window. But I guess...not? Then what was the point of all that?)

Villain: Still no answers regarding the Eclipse
Why does the Eclipse grant and/or take away powers? Why does it last so long, and appear so universally, in violation of all laws of astronomy and physics? Have there ever been any other "magic" eclipse besides the three we've seen on the show? If so, how did they affect the Elder Heroes and/or Adam? If the first eclipse activated powers, then how did Adam and the Elder Heroes get theirs?

These are all questions, some of which have been hanging in the background since the very beginning of the show, that need to be answered. In a two part episode titled "The Eclipse" that is prefaced by an episode in which many characters stress the significance of such an event, one assumes at least SOME of those questions will be addressed. Unfortunately, not a single one was.

Villain: What was the point of the Eclipse?
Um, so, what was the point of this two part episode? Basically, all the eclipse did was offer an opportunity for character development. Daphne is (hopefully) okay with her status as a "good guy," Parkman remembered he can help people without his power, Nathan decided that while his Dad is an evil megalomaniac, his vague plan to give everyone powers isn't such a bad idea, Peter (hopefully) accepted that he can be a Hero without powers, Sylar decided he was evil, after all (maybe), Mohinder wondered if perhaps the monster inside him wasn't born of his powers, and we took a few more trips around the "I love him/I hate him/I forgive him" merry-go-round with Claire and Bennet.

I'm very reluctant to begrudge this show spending some time on character development, especially this season when plot has definitely come before character. But it feels a bit like "too little, too late." Is spending two episodes, four from the end of your plot-driven volume, the best time to suddenly decide character development is important? And to spend an additional episode preceding it building up how momentous and game-changing the eclipse was going to be, only to have the eclipse come, take away powers for a bit, freak everyone out, then go away, leaving everyone shrugging? I'm almost surprised Arthur didn't have a line saying something like, "wow, was I worried over nothing, or what?" 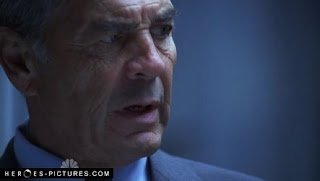 The other problem is that at this point in the season, I have little faith that any kind of character development will stick around. When Elle goes from "well-adjusted after a session with Dr. Sylar" back to "kittenish sociopath" to "yearning for a normal life" in the course of three episodes, does anyone have any faith that the strides the characters took in the last two episodes will stick around? What are the odds that next week Peter is still whining about being powerless (despite proving he doesn't need his powers to be heroic), that Daphne is still waffling and reluctant to embrace Matt's love (despite accepting that she's a good person), that Sylar will be back to trying to control the evil within (despite declaring that people don't change and killing Elle). And so the one thing this two part episode did, develop the characters, will most likely be rendered moot by the following episode. But I guess I shouldn't harp on that until it happens. 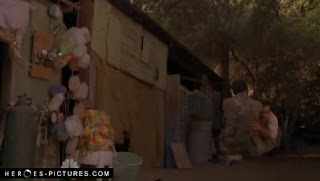 Hero: Bennet killing Sylar
Even though the audience knew Sylar wasn't going to die, it was still nice to see Bennet finally follow through and, as far as he was concerned, off the bastard that's tormented his daughter. I also thought his reaction when he learned Claire died but healed after the eclipse ended, meaning Sylar was probably alive too, was well done. 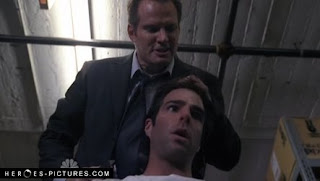 Villain: Hiro's more effective as a 10 year old
How sad is it that in the fifteen seconds it took 10-year-old Hiro to teleport Sylar and Elle away and go back in time with Claire, he did more than 28-year-old Hiro has done all season?

I also chuckled when Hiro freaked out at all the terrible, grown-up things his adult self went through (the death of Charlie, stabbing Sylar, fighting his childhood hero, burying his father) because, seriously, kid, don't worry; even after your adult self experienced all that, he didn't act much more grown up than you are now. 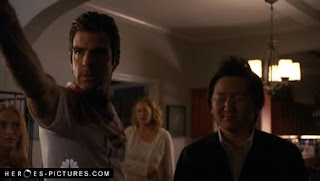 Hero: 9th Wonders explanation
It was nice of the writers to put in some kind of explanation as to how Isaac's art was still appearing in 9th Wonders comics months after his death. Whether you buy their explanation or not, it's at least commendable that they took the time to explain it on the show instead of in interviews. 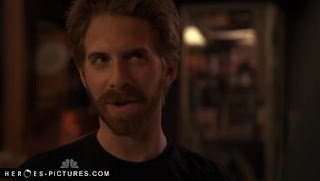 Hero: Claire and Hiro together
It's no surprise that the comic shop guys pointed out how Claire and Hiro have never met, considering they are the two characters who, for whatever reason, find themselves the farthest removed from the main narrative. I'm excited to see them together, finally, and hopefully involved in a plot critical to the overall narrative of the season. Plus, the idea of revisting that scene with Kaito and Bennet offers some hope that we might get a little more background on the Company and at least one of the Elder Heroes. We shall see if that promise is fulfilled. I remain doubtful. 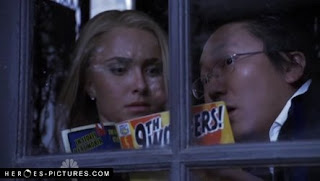 Sadly, the second part of Heroes two parter was one of the more dissapointing episodes of the season, and since so much of part one hinged on how part two ended, it kind of drags the whole thing down. While there were certainly some cool moments sprinkled in, and some character development I hope sticks around, the whole eclipse and the subsequent depowering feels, in the end, largely inconsequential, especially in light of what a big deal all the characters were making of it beforehand.
Newer Post Older Post Home
Posted by Austin Gorton at 5:08 PM