I've watched Heroes since the first episode. I have yet to miss an episode. I enjoyed the first season, even though it had a slow start and a lack-luster ending. The second season was OK, murderous, comic book stealing thugs asside. And Season 3...well...the outlook isn't good.

Teebore and I have been discussing Heroes quite a lot lately, and we rarely say good things about it. And if we do say something good about it it's generally followed by a "but." Which is sad because the show has a good premise, good special effects, and great acting. Basically, it's just the writing that is hurting the show. 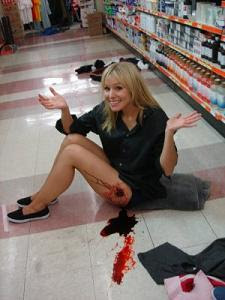 I could go on and knitpick this and that. I could talk about the plot holes, lack of continuity, stupidity of the character decisions, ambiguous powers, ambiguous motives, dramatic mood swings of characters, inconsistency in character development, and times when characters simply act completely out of character. I could go on and on about it, but I only have so much time. But really, the issues that Heroes has can be boiled down into one singular problem, a lack of focus.

Example: Matt Parkman and Daphne are tasked with finding Hiro Nakamura and bring them back to the Company. Matt and Daphne are looking up phone numbers when Hiro and Ando show up at their front door. Seems convenient enough. Daphne freaks out (again) and disappears to Kansas. Matt has to get Hiro, who's a mental 10-year-old, to transport them to Kansas. Hiro does. Matt tries to talk to Daphne, but an eclipse occur taking away their power. Matt, with the help of Hiro, ends up talking to Daphne while Ando and Hiro go to the comic book shop to explore how to get their powers back. Hiro sees the life he forgot in a 9th Wonder Comic and freaks out. Seth Green helps Hiro through it. Hiro discovers he needs to take Claire into the past. The eclipse ends. Hiro takes Claire into the past. What the heck were we supposed to do in the first place?

I'm not trying to say side tracks are necessarily a bad thing, sometimes, but it seems a hero can't do anything without going off on 10 different tangents. It comes off as bad writing. It looks as if the writers don't know what they want their characters doing so they just have them do something different every episode.

Season One was much acclaimed and I think it's no coincidence that Season One also had the most focus. The plot began relatively simple. Ordinary people find out they have extraordinary powers, learn to use them, see an impending doom and decide to stop them. Meanwhile, a Company tries to round up and track these super powered beings.

Sounds simple enough, but I should stress that people look at Season One with rose-colored glasses. Everyone likes the first season because they remember the episodes that built up to the climax. Everyone remembers all the episodes that were focused with the characters learning to accept their powers and coming together to fight for a common cause.

What people forget is that even at the end of Season One, focus was lost. The Heroes almost came together, but not really. DL, Nikki, and Parkmen ended up fighting Linderman while the others fought Sylar. Sylar and Linderman were connected, but Sylar didn't know that, and the Heroes didn't even realize they were working together. And let's also mention the ambiguous connection between Linderman and the Company despite them seemingly having opposing goals that was never resolved.

My point is that the build up to Season One had focus, but the climax did not. And that would prove to be harbinger of things to come. 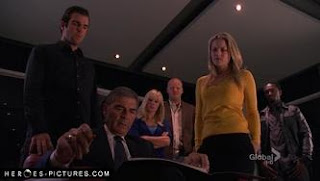 Despite the mess that Season 3 started with, I gained hope at the end of the episode, "It's Coming." The heroes came together, the villains came together, and it looked like they had their goal, to fight eachother. I thought that finally things would become focused. But what happened almost immediately the next episode? The Heroe's split up on different missions and, shockingly, got side tracked. And a depowering eclipse was thrown in for no good reason.

The whole Daphne running away to Kansas thing seemed a bit pointless, except to let us know she's crippled without her powers. But with some simple changes would make the side tracking worth while.

Example: Daphne runs away to Kansas because she's afraid of Arthur. Arthur takes powers away and we find that if Daphne does not have powers she can't walk without crutches. Matt follows her to Kansas and talks with her. Daphne comes to the realization that she's still worthwhile even without her powers. Thus, she overcomes her fear of Arthur and is able to combat him. That's character development that also helps with the main conflict.

That's keeping things focused. I would say this is all Writing 101 but I'm a Computer Science Major, not an English Major. So I really have no idea what Writing 101 teaches. I'd instead just call this plain old common sense.
Newer Post Older Post Home
Posted by Dr. Bitz at 11:02 AM