Not to be confused with Christmas specials, "very special" Christmas episodes have long been a tradition for TV shows, teaching viewers young and old all kinds of important lessons, like when DJ and Stephanie were stranded at an airport and learned that Christmas isn't just about getting presents, or when Blair learned that convicts are people too, or when Zack and the gang learned that not all homeless people are scraggly bums; sometimes they're attractive blond girls.

Amends (Buffy the Vampire Slayer): From Buffy's third season, this loose adaptation of the Dickens Christmas classic finds a recently-returned from hell Angel haunted by visions of his past victims, created, unknownst to him, by the First Evil in an attempt to remove Angel from the scene by leading him to suicide. Angel, ultimately deciding he deserves to die, resolves to watch the sunrise and not even Buffy can talk him out of it. He is spared by a mysterious and unseasonable snowfall that blocks out the sun and he realizes that, perhaps, he can atone for his past evils, a revelation that puts him on the path he walks in his own series.

Lesson Learned: Try not to caught in the middle of a battle between two opposing and powerful forces, especially around the holidays.

Afternoon Delight (Arrested Development): Michael, feeling ignored by George Michael, and Maeby, feeling abandoned by her mother, decide to attended the Bluth Company Christmas party together, where they proceed to stick an assortment of candy to G.O.B's suit (he's paranoid that kids will put their sticky fingers all over the expensive suit he's been boasting about) before hoping on stage to perform a karaoke version of "Afternoon Delight". Lindsey and George Michael, seeing Michael and Maeby having such a good time together, leave before Michael realizes that Afternoon Delight isn't the best song to be singing with his niece. So at a second Bluth Company Christmas party later that day (long story), Lindsey and George Michael decide to get back at Maeby and Michael by doing their own rendition of Afternoon Delight...before they, too, realize the adult nature hiding behind the song's innocent melody.

Lesson Learned: Be careful about with whom you sing Afternoon Delight. 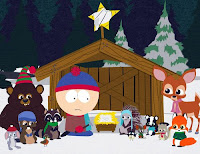 Woodland Critter Christmas (South Park): South Park has a long tradition of Christmas episodes, most famously the introduction of Mr. Hanky the Christmas Poo. But my favorite is their most recent one, the Woodland Critter Christmas. Done in the tone and narrative style (complete with rhyming narration) common to storybooks and the stop-motion Rankin-Bass classics, Stan, "the boy in a red poof-ball hat", helps a group of cuddly, wide-eyed woodland critters bring about the birth of their messiah, even going so far as to slay a moutain lion that devours the Critters' savior every Christmas.

Of course, it turns out that beneath their cuddly cuteness, the critters are vicious, orgiastic psychopaths, their messiah is actually the anti-Christ destined to bring about the Apocalypse, the moutain lion Stan slew was the only creature capable of killing the anti-Christ, and that the lion's death left behind three orphaned cubs, which Stan proceeds to reluctantly take to an abortion clinic so they can learn how to perform an abortion to kill the anti-Christ in-utero.

Hilarity ensues, and by the end, Santa decimates the Critters with a shotgun, Kyle gets possesed by the anti-Christ and freed by a lion-cub abortion performed on his anus, and all is revealed as a Christmas story written for class by Cartman. 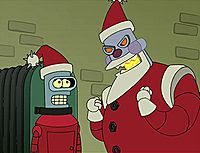 A Tale of Two Santas (Futurama): This second tale of the future's evil Robot Santa features Bender taking his place and getting put on death row for Santa's crimes, culminating in Dr. Zoidberg dressing up as Santa's friend Jesus in an attempt to clear Bender's name. It also features Santa's hilarious, inebriated, short-shorts wearing Neptunian "elves" and Coolio as the voice of Kwaanzabot. 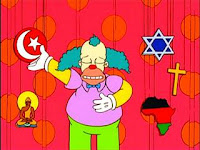 The Grift of the Magi (The Simpsons): I went back and forth on this one, reluctant to proclaim "Grift" my favorite Simpson's Christmas episode when it's really only a Christmas episode for the last third, but, well...that last third is funnier than the entireity of most other Christmas eps, what with Gary Coleman and Homer stealing the town's Funzos and the ending narration in which Mr. Burns gets visited by three ghosts and Moe replaces his head in the oven with a plump Christmas goose after seeing the world had he never been born.

Lesson Learned: Gary Coleman knows EXACTLY what you're talking about...

Marge Be Not Proud: In which Bart gets caught stealing the videogame Bonestorm, was originally going to be crowned my favorite, but upon re-watching it recently, I found it...kinda boring.
Miracle on Evergreen Terrace: After accidentally destroying the tree and all their presents, Bart pretends a burglar stole the family's Christmas and the townspeople respond by giving them $15,000 which is spent on a new car that gets destroyed shortly thereafter, so that when the townspeople find out the truth, they retake their donations by pillaging the Simpson's house. Not without its fair share of laughs, but ultimately a little too depressing to be my favorite.
Skinner's Sense of Snow: This episode finds the children trapped inside the school with Principal Skinner during a blizzard and is considered a Christmas episode, but aside from taking place around Christmas time, it really isn't.
'Tis the Fifteenth Season: A fairly solid Christmas episode in which Homer, after watching Mr. Magrew's Christmas Carol, is motivated to change his selfish ways and starts competing with Flanders for the title of "nicest guy in town," culminating in Homer stealing all the townspeople's gifts, intent on destroying them, Grinch-style, in order to free them from their desires. Funny and well done, I was pleasantly surprised upon re-watching this one. However, I remain reluctant to call any episode this recent the best Simpsons anything. Perhaps in a few years...