AKA: A motorcycle gang kidnaps Marge.

The Setup: After winning a motocycle in a dance contest at a 1950s theme diner, Homer forms a motorcycle gang named the Hell's Satans that attracts the attention of the real, tougher Hell's Satans.

Homer: The first meeting of Hell's Satans is called to order.
Ned: I move we reconsider our club name. Make it something a little less blasphemous. After all, we don't want to go to Hell.
Lenny: How about the Devil's Pals?
Ned: No
Moe: The Christ Punchers.
Ned: The Christ...I, I don't think you understand my objection. 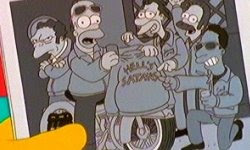 Marge: You took a picture of me when I was asleep?
Homer: If you'd been awake you would have said, "no." You can see the bind I was in.

Homer: No! My wife is not a doobie, to be passed around! I took a sacred vow on my wedding day to bogart her forever.

Teebore's Take: This one never really did much for me, and after watching it again, it still doesn't. The best bits are probably the stuff at the 50s diner at the beginning (though Family Guy recently did the same bit, but funnier) or the shot of Homer's pathetic motorcycle gang, including Moe on an antiquated motorcycle, Carl on a rented Hertz Scooter, Flanders (complete with helmet and safety pads) on a kids bike, and Lenny on a riding lawn mower. After that, there's a complete disconnect in the gang's portrayal between when they terrorize the family and when they're being tutored in manners and career advancement by Marge. And the "motorcycle duel" at the end isn't just zany, it's ridiculous and not very funny.

This one is zany from end to end, from the beginning, when Homer wins the dance contest by dancing Marge back in time and has to be taught how to ride his bike by Bart, through Homer's eating of his gang jacket and the complete destruction of the Simpsons' home by the motorcycle gang, to the ending, in which Homer and the Hell's Satans leader duel for Marge using motorcycles as swords.

Aside from some jerkiness as the leader of his gang and his treatment of Marge at the beginning, Homer is actually more a legitmate victim in this one, and ends the episode desperately trying to find Marge and defend her honor. 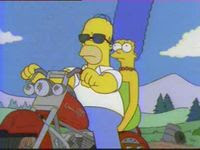