Hero: Elle's funeral
I like that the writers took the time to confirm that Sylar killed Elle, even showing us the body. Whether you loved that she was killed or hated it, at least we can all agree she is, indeed dead, and that the only way she'll be back is in flashbacks or alternate timelines (or a full-on, deliberate resurrection). 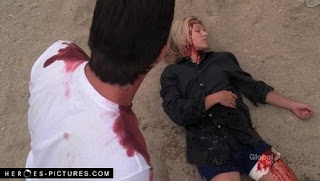 Hero: No time lost on Peter and the Haitian's journey
Having Peter and the Haitian just show up in Ma Petrelli's office, saving the audience a belabored sequence in which they go to the embassy, get put on a plane, etc., was much appreciated. Sometimes its okay to just let us connect the dots ourselves.

Villain: Ma Petrelli's causal discussion of attempting to murder Arthur
This is a minor nitpick, as the line was clearly written to remind the, in the writers' minds, apparently, numerous idiot-viewers that Ma Petrelli tried to kill Arthur, but the casual way she shared that info with Peter bothered me. It should have been new info to Peter since, as far as I can recall, she's never told him that before so a bit of reaction from him would have been nice. Also, considering that Arthur believed that info was so dangerous he had to wipe it from Hiro's memory, perhaps Ma Petrelli shouldn't be flinging it around so casually.

Hero: Sylar's new power
While it was ridiculously convenient that Sylar had the name and location of a person with the specific power he needed on his cell phone, I'll give the show a pass on that since, with all the lying that goes on, this was definitely a power Sylar needed to acquire.

I still haven't decided how I feel about Sylar's return to his serial killer ways. On the one hand, I enjoyed seeing him back in season one form, as I've always believed he works best as a villain. On the other hand, I'm still pissed that, however misconceived it was, the entire "redemption" arc was a great big waste of time, especially since Sylar NOT being a Petrelli makes a lot of dialogue earlier in the volume almost nonsensical.

I guess I'm witholding my final verdict until Sylar hooks Ma Petrelli up to his new lie detector; after all, he knows Arthur isn't his father, but that doesn't mean Angela couldn't still be his mother. She was something of a randy minx back in the day, as at the very least we know she had an affair with Kaito.

Villain: Yet another quest
Much like Peter and the Haitian's journey, I'm glad Matt and CO's quest to find Isaac's last sketchbook was relatively abbreivated. Yet once again, they accomplish one goal just to set off on another RPG-like quest. Find Hiro-Find Daphne-Get our powers back-Find Isaac's Last Sketchbook-Find the Formula. Enough already!

Hero: Hiro's mom
The scene in which ten-year old Hiro is healed by his mother and confirms for her that her faith in him is manifested in the man he's become that she never go to know was brilliant. It was easily the best scene Hiro has been in all season. It is another deeply affecting moment for the character (like the deaths of Charlie and his father and his defeat of Adam) that makes the buffoonish attempts at comic relief the writers usually put him through all the more sad and pathetic. 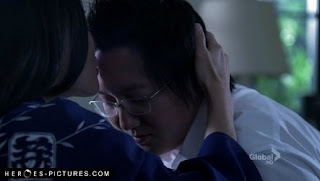 Villain: Arthur's visit to the past
Unlike Peter and the Haitian, here's a place where I would have preferred the show connect the dots for me. I can easily surmise that Arthur drew a sketch that showed him Claire and Hiro in the past mucking around with the catalyst (after all, Isaac drew it with his powers) but a brief scene showing the audience that would have been better than my surmising. Also, if Arthur's had time traveling abilities this whole time...yeesh. That just opens up a whole can of worms. I don't even want to think about it.

Villain: Hiro biffs it again
It would have been nice if Hiro could have put up more of a fight against Arthur. I'm getting really sick of Hiro getting pwned every time his story seems to be on the right track. After getting his memory back, sharing a powerful moment with his mom in which he proved her faith in him and receiving the catalyst, he's back to being a chump moments later. In the span of one scene he goes from quiet gravitas as he emerges onto the roof to comically crying for help as he dangles from a pole. 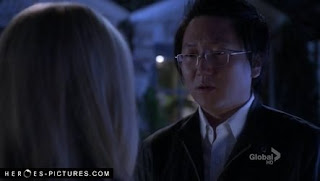 Hero: Peter took the shot
He took his sweet-ass time doing it, but I'm glad Peter finally did shoot Arthur, especially since I would have bet cash money he'd wuss out at the last minute. The jury is still out regarding how I feel about Arthur's death, however (see below). 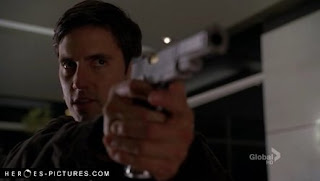 Villain: Still no clarification regarding the formula or how it destroys the world
On the one hand, Arthur was WAY too powerful a villain for this show where the Heroes so rarely work together (especially if he could time travel on top of everything else) so I'm not shedding any tears over his loss.

On the other hand, the main villain of the volume is dead, presumably, and we don't know a DAMN THING ABOUT HIM, HIS PLANS OR HIS MOTIVATIONS. We know he's evil (he wanted his son killed) but we also know he tells people he's making the world better by using the formula.

And how does the formula work? Do they have any control over the type of power the subject gets? Is this the same formula that gave Nathan, Tracy and other synthetics their powers, or is this a better one?

We're now one episode removed from the end of the volume, and we still don't know the specifics of the villain's plan, both in terms of intention and execution, the volume's Macguffin, or the very threat the heroes are trying to prevent. It's possible all that will be revealed in the last episode, but I doubt it, especially with the orchestrator of that plan dead. 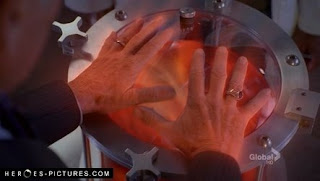 Villain: Lame cliffhanger
Again, a minor nitpick, but when my DVR recording stopped and I had to switch to my recording of My Own Worst Enemy to catch the last few moments of Heroes because it ran long, I was excited, because I figured there had to be one more good cliffhanger-y moment after the scene with the earnest GI Joe getting his power. After all, the penultimate episode of the volume wouldn't end with as lame a cliffhanger as "look, the still-vague formula works in a still-unexplained way! It gave some dude we just met super-strength!" Needless to say, I figured wrong.

Hero: Thematic focus
This episode was a marked improvement over the last couple. Why? As Dr. Bitz said, focus. For all the disparate plot elements and time periods, the focus of this episode was the relationship between children and their parents. Sylar's determination to learn the truth of his parentage, Nathan joining his father, Peter trying to kill him, Claire saving herself by inspiring her father's first act of rebellion against the company, Hiro getting healed by his mother and sharing a moment they never had. Everything else that happened in the episode happened in service of those plots, which were all connected by the common theme. A little focus goes a long way towards making the episode seem whole, and not just a jumble of random events.

All in all, this was better. Really. Not great...but...good. An improvement on last episode's catastrophe, at least. As an episode, it was strong, and the major flaws within it were endemic to the entire volume (Sylar's on again/off again redemption, a lack of clarity regarding the formula, Arthur's motivations and how exactly his scheme leads to apocalypse, the constant humbling of Hiro and the need to push various characters off on constant RPG-like quests). The strength of this episode offers hope that while the volume as a whole is weak sauce, it will at least go out with a bang and a strong finish next week. 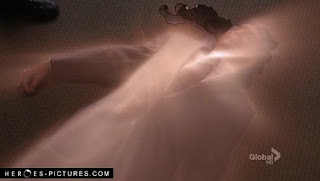