AKA: Apu and his wife have octuplets.

The Setup: At Ikea-parody "Shøp" the Simpsons run into Apu and his wife Manjula. Their infatuation with Maggie convinces them to have a baby.

Homer: Kids are the best, Apu. You can teach them to hate the things you hate. And they practically raise themselves, what with the internet and all.

Marge: I knew you had your hands full with the babies, so I baked you some banana bread.
Apu: Oh hallelujah, our problems are solved. We have banana bread. 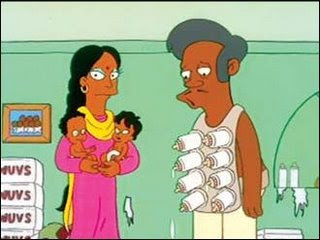 Teebore's Take: Definitely an improvement, and one of a handful of episodes that features a change to a character's status quo that sticks. Also, the zaniness (in this case, the octuplets getting sold to a zoo to perform in a variety show and Homer and Apu's subsequent attempt to break them out) actually has a point, as it satirizes the media spotlight that often gets thrust on "multiples" specifically and celebrity babies in general. The Simpson family getting shoehorned into Apu and Manjula's story doesn't seem as forced as some supporting cast-centric episodes do, considering they did host their wedding, making the Simpsons more than just familiar customers to the Nahasapemapetilans.

Selling the octuplets to a zoo where they perform in a variety show before Homer replaces them by unicycling past cobras with Butch Patrick on his shoulders is pretty zany, but the zaniness is mitigated a bit by the fact that its done, in part, in the service of satire.

Aside from a few insensitive quips, Homer spends most of the episode actually helping Apu and Manjula, both to get pregnant and later, to steal back their babies.
Newer Post Older Post Home
Posted by Austin Gorton at 8:48 AM