Villain: No real revelations
I enjoy a good retcon probably more than the average comic book reader, and while I certainly enjoyed this episode, it really wasn't what I was hoping it would be. Filling in the background regarding Arthur's survival and further attempts to rationalize Sylar's reformation (more on that later) are appreciated, but I was also hoping to get some background as to what, exactly, Arthur's motivations and ultimate goals are. Forty-some odd episodes into this show, and we now have two mysterious companies running around, still with no clear purpose or goal. Why was Primatech formed in the first place? What was its ultimate goal? When was Pineheast formed (before or after Arthur was "killed" by Ma Petrelli)? To what end was it created? Along with all that, the show is crying out for more background on the relationship between the ElderHeroes and their relationship to the Company(s). I didn't expect this episode to answer all those questions, but I was hoping it would answer SOMETHING. Unfortunately, it really didn't answer anything.

Hero: Linderman retcon
This episode was basically a series of retcons. A successful retcon is one that doesn't intentionally or obviously contradict what's already been established. A good retcon is one that not only succeeds, but actually makes you wonder if it wasn't planned all along by building on or adding to something small in previous scenes.

The revelations involving Linderman in this episode are an example of a good retcon. Knowing that Arthur ordered the attack on Nathan that crippled his wife (and caused his ability to manifest) casts much of Linderman's interactions with Nathan later in season one in a new light, especially the scene where Linderman healed Nathan's wife. Before, it was viewed as an additional manipulative element to get Nathan to go along with the plan. But after this episode, that scene can also be viewed as an act of contrition on Linderman's part, setting something right that he inadvertently caused. By casting the season 1 villain in a more sympathetic light it further villifies Arthur, the current villain, without having to kill off more villains. 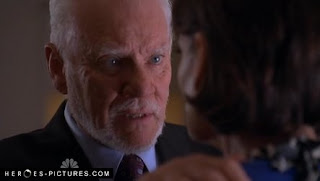 Hero: At least they're trying...
I'm fairly "meh" regarding the season long push to reform Sylar, but I at least appreciate the effort the writers are going to in order to sell it. This is definitely a writing staff that doesn't seem above simply telling us "yeah, Sylar was remorseful all along. He's really not that bad a guy" instead of showing us that, so I'll give them credit for trying to sell the idea.

Unfortunately, the Sylar retcon in this episode, was, barely, a successful one and certainly not a good one. And I can question how successful it truly was, as I'm pretty sure the idea that the Company in general and Bennet specifically being not only aware of Sylar but understanding how his power works contradicts some of Bennet's interactions with Sylar in the first season. But it's been awhile since I've seen those episodes, so I could be wrong. Maybe it all fits. I'm also curious to rewatch Sylar's scene with Elle from earlier this season (when he tried to take her power and she inadverntently freed the Level 5 inmates) to see if any of the relationship we see here is either hinted at or outright contradicted. I'll take back a lot of what I've said about the writers if it was hinted at, but I think the best we can reasonably hope for is that it wasn't outright contradicted by this episode.

The best retcons are the ones that make you think, maybe, the writer(s) had it planned all along. The problem with retconning remorse and an uncontrollable hunger into Sylar is that we actually know for a fact this wasn't planned from the beginning. Sylar's development from season 1 boogieman to a member of the show's principal family of characters was born out of the work the actor did with the character and the fan's response to it. But Sylar the character existed (and appeared) on the show before the actor was even cast, so we KNOW those kinds of development wasn't planned. This makes it all the harder for us to buy the idea that during all those scenes in season 1 of Sylar being EEEVVVIIIILLLL (like when he captured and tortured Mohinder or killed his mom) Sylar was actually remorseful and just being driven by the Hunger.

Still, points to the writers for at least trying to show us the development of the character instead of just telling us he's always been that way, because the writers say so. 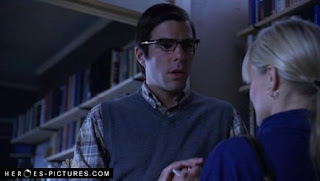 Villain: What, ultimately, was the point of Hiro seeing all this?
The episode made a point of framing what we saw as a "spirit walk" experienced by Hiro; to what end? Hiro might have learned Arthur was still alive, intent on warning Angela, but he's too late for that, even if Arthur hadn't attacked him. Sylar's relationship with Elle doesn't have any bearing on the plot. Meredith's backstory, while interesting to see, was so detached from the central narrative that I think there has to be something in it that will become important later on. If so, hopefully that will tie in with why Hiro needed to watch this episode along with the audience. Perhaps later episodes will offer meaning to this plot point; in the meantime, its a big unanswered question.

Hero: Meredith crashing the train
While fact that the train crash where Claire used her powers herocially for the first time was caused by her birth mother is more or less superfluous to both plot and character, it's the kind of "connect the dots" moment I love in an episode like this. 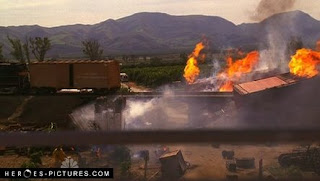 Not a bad episode, but rather a disappointing one, for what it didn't show us. Though your mileage may vary as far as the ongoing Sylar rehabilitation plot goes, and will definitely color your enjoyment of this episode. I'm also hoping the seemingly unrelated and inconsequential Meredith storyline herein was setting up something for the future that warrants placing it alongside backstory for two of the show's main characters.
Newer Post Older Post Home
Posted by Austin Gorton at 2:25 PM