Hero: The Haitian's location
Nice to find out where the Haitian's been most of this season. It was also nice to find out that he was chasing down a Level 5 escapee whose power (invulnerability) and relationship to the Haitian (his brother) make it clear why the Haitian was the best used hunting him down instead of partnering with Bennet.

Hero: No time lost finding Hiro
When it was revealed that Parkman and Daphne's job was to find Hiro, I groaned, thinking they were about to depart on yet another multi episode detour away from the main narrative. Needless to say, I was relieved when Hiro showed up at their door before the scene even ended (of course, they got detoured anyway, but more on that later). 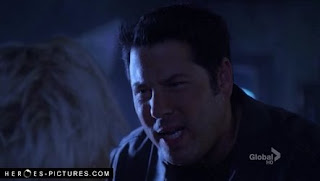 Villain: Elle's personality
Over the last two episodes we've see Elle filled with self-loathing over helping create Sylar and anger at him for killing her father. Ultimately, she let it all go and moved on. She remained kittenish and playful afterwards with Sylar, but I got the impression from that she had turned a corner. Then this week, she's urging Sylar to stand up for himself and embrace the serial killer within...um, wasn't she horrified at herself for following the orders that created that serial killer just a few episodes ago? The same serial killer she hated for killing her dad?

Okay, I get that she's a sociopath with wild mood swings, but this teetertotter approach to her character is driving me nuts. The problem is that if the writers are going to swing her around this wildly every week, it makes any development of her character essentially meaningless, because ultimately, she'll just ignore it and act completely different in the next episode. Kristen Bell is one of the best actors on the show; its a shame the writers don't give her better, or at least, more consistent material with which to work. 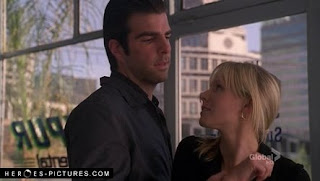 Hero: HRG's a badass
There's definitely always been the implication that Bennet's got some physical skills; after all, he's lasted pretty long as the "one of us" side of a partnership alongside more powerful people, and all those escapees seem to fear him despite his lack of powers. So it was fun to see Bennet display some of those skills to Claire. 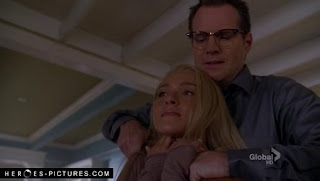 Villain: Where's Meredith?
Meredith was brought in this season to keep an eye on Claire while HRG was off hunting escapees. Then, she partnered up with Noah for, as far as we know, one case, before Noah was reassigned to protect Claire. But now Meredith is nowhere to be seen. It seems to me that having someone with a power helping protect Claire would make Bennet's job that much easier (after all, one of us, one of them) and we know Bennet trusts Meredith, at least, with Claire's well being, since he brought her in to fulfill the same duty he's now doing solo. Her absence, with no explanantion given, in this episode was a major flaw.

Mohinder: Wasssss onccccce a maannnn...
This is more an aside than anything else, but Mohinder's transformation and cocooning prior to the eclipse made me think of the GI Joe movie, in which Cobra Commander slowly transforms
into a giant snake and spends most of the film moaning that he "wassssss onccccce a maaaaannn."

Villain: Nathan and the eclipse
I'll admit this a nerdy nitpick, but when Nathan and Peter came crashing down in Haiti, Peter mentioned their was an eclipse the first time Nathan flew. Except Nathan flew for the first time at night, when goons were ramming his car and crippling his wife. Maybe the power-activating eclipse happened earlier that day, but I was always under the impression that Nathan's manfiestation and that accident occured a few months before the pilot and its eclipse.

Maybe Nathan's been lying to Peter about the first time he flew, so Peter thinks it was the same day as that eclipse? Nathan was, after all, deeply ashamed of flying away from the crash that injured his wife. Otherwise, it's a pretty glaring inconsistency.

Hero: Peter and Nathan together
Continuity snafus aside, it was fun to see Nathan and Peter hanging out together. For brothers whose family is central to the show, the two often seem to find themselves on opposite ends of the story, so I appreciated seeing them working together and bickering about past events. 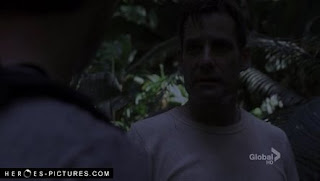 Hero: Bennet's glasses
I don't know if it was a direction or something the actor improvised, but I liked how Bennet removed his glasses when comforting Claire and then, after leaving her room, put them back on, resolved to extract vengeance.

Here: Daphne's secret
When Hiro showed up at Matt's door, I was so excited they wouldn't be going on a detour that when Parkman idiotically read Daphne's mind and sent her running, my rage was all the greater, because now there was going to be a detour brought on by character stupidity.At that point, I officially got fed up with the mysterious secret that Arthur used to control and scare Daphne and, assuming it wouldn't get resolved anytime soon, was all prepared to label teasing it again a "villain" of this episode.

But surprisingly, they did finally reveal her secret this episode, and it actually turned out to be a pretty good one. Years of movies and TV shows had me initially suspcious of her bumpkin father, but in the end, it turned out to be something simple yet effective: it makes perfect sense why she would be so scared of someone who could take away her power for good.

Villain: The cliffhanger
Dr. Bitz pointed this out to me, and I suppose I should technically wait until next episode to decry it, but there's just no good way to resolve that cliffhanger. Love 'em or hate 'em, Sylar and Elle are fan favorites and two of the best actors on the show, so I'm fairly certain neither one is going to die. Which means Bennet will either miss or not take the shot, and there's no explanation I can think of for why he'd do either that wouldn't make him less of a badass. So its either kill a fan favorite or wussify Bennet: neither option is a very good resolution. 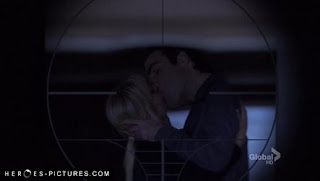