Hero: Arthur didn't take Hiro's power
I'm going to assume that Arthur already has the teleporting ability we witnessed when he popped back from Africa to chat with Sylar and that he didn't take it from Hiro, since Hiro clearly still has his powers and thus far, Arthur leaves a person dry when he nabs their abilities. The last thing this show needs is a villain with time travel abilities, because the "why didn't the he just go back in time and..." game is hard to enough to play with a good guy who at least has morals and guidelines.

Villain: Arthur didn't take Hiro's power
I'm happy he didn't, but why the hell didn't he? I know the episode later established definitively that Arthur can touch people without taking their power (so its a conscious decision on his part) but why wouldn't he take Hiro's power? Obviously, he wanted to wipe his memory, and we can assume he would have taken his power eventually if he hadn't been distracted by the eclipse painting, thus allowing Ando to get them the hell out of there, but why wouldn't he steal Hiro's power and then wipe his memory? Sure, I can come up with some answers to why that scene played out the way it did, but I shouldn't have to; that's the writer's job. 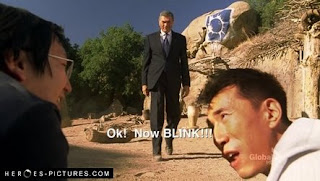 Villain: Sylar's power
I'm reluctant to complain about this, because for once the show made a point of explaining how someone's power works, and furthermore, the explanation involved a long-running question (if Sylar's power is to know how things work, how does that translate into the ability to do whatever he's figured out? After all, I know how a car works, but that doesn't mean I could build one...). But I am going to complain about it, because I would have liked for the explanation to be a little more clear cut and not filled with so much ambigous psychological mumbo-jumbo. Ultimately, I think they were trying to say that Sylar's power is like Peter's: he can use empathy to absorb someone's power without taking it away or slicing off their head. But of course, this makes us wonder how Sylar ended up with two "base" powers (intuitive knowledge and empathic power absorption) when everyone else just has one.

Villain: Hiro as a ten year old
Really, my problem has nothing to do with him thinking he's ten. 10-year-old Hiro, sadly, isn't a whole lot different than 28-year-old Hiro, but with so much else going on in the main Primatech vs Pinehearst story and stories peripheral to it, his storyline remains a distraction from the main events going on elsewhere. Once again, Hiro finds himself involved in a plot as far removed from the main narrative as possible. And from the sounds of upcoming episodes, his story is just going to continue to meander further and further away from the main plot. 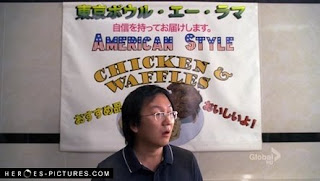 Hero: Sylar's new clock sound effect
The creepy "ticking clock" sound effect used to underscore times when Sylar was in "harvest" mode is one of the show's best technical effects. So I thought it was pretty cool that they built on that idea by using a more triumphant (but still kind of omnious) "clock chiming" sound effect when he absorbed Elle's power. Hopefully this new sound cue will be used in much the same way as the old ticking was. 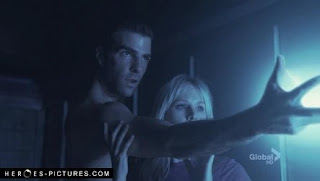 Hero: Nathan not as stupid as his brother
Sure, it can be argued that Nathan was more informed about Arthur's true nature when he barged into Pinehearst than Peter was, but I like to think Nathan's refusal to immediately embrace his father (literally and figuratively) is a sign that he's smarter than his brother.

Hero: Sides are chosen
I'm a sucker for those uber-cheesy "lines are drawn, sides are chosen" lineups, so of course I loved this episode's completely over-the-top flashing of a "Hero" followed by a "Villain." It suggests the climatic, powered free-for-all fight that we've been waiting for throughout the show's entire run is drawing ever nearer. Of course, I know we're probably not ever going to get that much-yearned for super brawl for three reasons:
1. The "Villains" side is ridiculously lopsided, with Matt and Daphne the only ones with any kind of offensive power alongside power-less Peter, defensive Claire, useless-power Nathan and Ma Petrelli with her vague dream powers.
2. The promos for next week suggest an eclipse occurs that takes away everyone's powers.
3. This is Heroes.

But I'll wait until that brawl officially doesn't happen to officially call it a "villain." 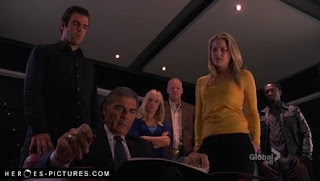 Hero: Claire's the catalyst
This revelation (while not nearly disguised well enough to warrant the final reveal, what with Arthur's comments, his file on Claire, and Knox and Flint going after her in this episode alone) almost makes you think these writers actually do map some of this stuff out beforehand. Now we know what it was that Sylar saw in Claire's head that made her different from the others, we know (presumably) who the "Chosen One" Kaito referenced in his video will to Hiro is, we can speculate as to why Kaito would even tell his idiot son about the formula (because even if it fell into the wrong hands, Kaito knew they'd still need Claire) and it even recalls the flashback scene in season one in which Kaito hands off an infant Claire to Bennet (though I don't think I'm quite ready to believe the writers had this plot reveal planned out that far in advance-they just made the best of the available material, something a good retcon should do). 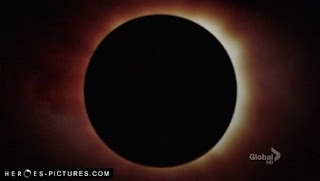