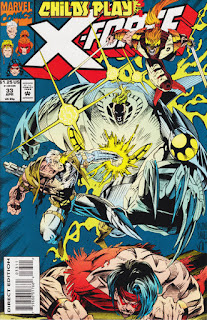 "Child's Play Third Move: Rules Were Made To Be Broken"
April 1994

In a Nutshell
X-Force battles Fitzroy

Plot
Outside the Guthrie home, X-Force battles Fitzroy, tricking him into using his own life force to open a portal to the last place he's been. As X-Force jumps through, Cannonball's sister Paige follows them, over her mother's objections. Meanwhile, Justice delivers Firestar to Gamesmaster, who tells him he is well aware of Shinobi Shaw's plans to usurp him, that he knows Justice intends, in turn, to betray Shinobi, and that all the mutants captured in the Younghunt thus far are now connected to Gamesmaster, so to kill him would also kill them. In New York, the New Warriors blackmail Graydon Creed into telling them the Gamesmaster is at Shinobi's Swiss chalet, while X-Force arrives at Shinobi's penthouse and forces him to do the same. At the chalet, Karma wakes up and frees the captive mutants, revealing that she's been in control of Siena Blaze since Blaze attacked her in Madripoor. However, the Gamesmaster in turn reveals he's well aware of that, and takes control of Blaze himself, using her power to blast everyone into unconsciousness, declaring he'll use their powers against those coming to rescue them.

Firsts and Other Notables
Part Three of "Child's Play, this issue finds X-Force battling Fitzroy before converging (along with the New Warriors) on the Gamesmaster and his captives. It also reveals that Karma took control of Siena Blaze in New Warriors #45, though that advantage turns out to be short-lived. 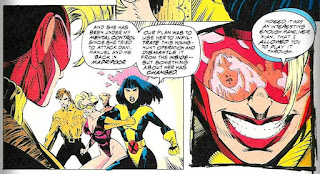 Cannonball & Karma enjoy a brief reunion, interacting for the first time since Karma left the New Mutants (to focus on finding her missing siblings, eventually ending up working for her criminal uncle and appearing in Wolverine) back in New Mutants #54. 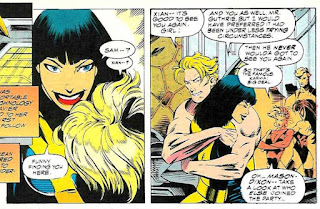 As X-Force leaves Shinobi Shaw, he notes a bug flying around his head; this will turn out to be Paige, having adopted that form to secretly follow along with X-Force, though once again, that level of physical transformation is somewhat incongruous relative to how she is later shown to use her power in Generation X.

Though draining his own life force to power one of his portals would seem to suggest Fitzroy is dead, he's not, but despite being introduced as one of the preeminent new villains following the linewide relaunch in 1991, and making semi-regular appearances over the last couple of years, it will be a little while before he pops up again (during the second year of X-Man), and this issue effectively marks the end of his association with the Upstarts (which will themselves be more or less ended in the final chapter of this story).

Similarly, Shinobi Shaw essentially gives up on his machinations involving the Upstarts and Gamesmaster in this issue, declaring it's time to focus on other endeavors (presumably his resurrection of the Inner Circle of the Hellfire Club, as mentioned in X-Men #29), though he will appear again sooner and with slightly more frequency than Fitzroy. 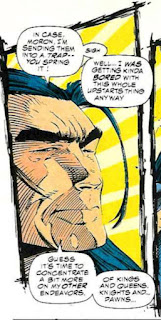 A Work in Progress
There's a mildly humorous running gag in this issue in which X-Force refers to Fitzroy's toady Bantam as "Bantamsir", because when they asked him his name, he responded, "Bantam, sir". 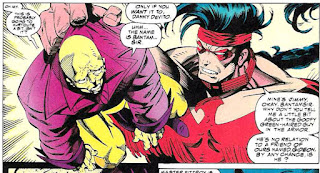 When Fitzroy tries to drain Cable's life force via his techno-organic arm, it backfires, causing Fitzroy to drain his own energy. The logic of which seems dicey (you'd think it would just shut his power off), but whatever. 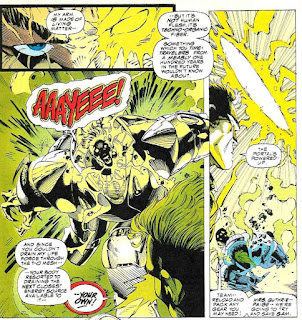 The Gamesmaster is operating out the Swiss chalet Shinobi Shaw had rebuilt over his father's, which he destroyed in his first appearance in X-Factor #67. 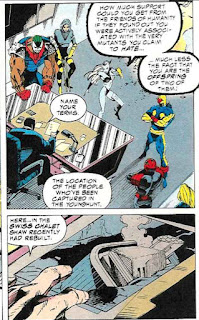 Shaw also comments on the fact that people keep seeming to drop in on him whenever he's in the tub (a reference to Uncanny X-Men #282 and X-Men #23). 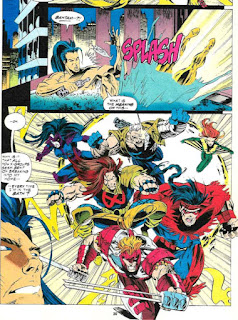 The Cable Guy
Cable apparently now has the ability to apply and retract artificial skin over his techno-organic arm. 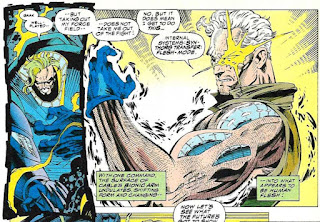 The Grim 'n' Gritty 90s
The fact that both Fitzroy and Gideon have green hair is mentioned, though it's (seemingly) just played as commentary on the fact that two unrelated 90s villains have green hair for no good reason, rather than an implication that they are somehow related. 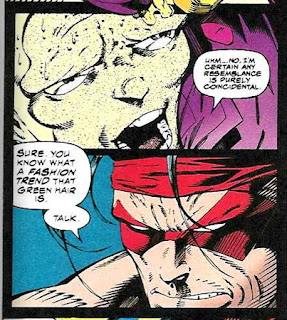 We're also reminded that New Warrior Namorita is now going by the name Kymaera, because the 90s.

Austin's Analysis
For the penultimate chapter of "Child's Play", Nicieza continues to somewhat surprisingly keep things small. The storyline concludes in the next chapter, and Nicieza gets all the players in place for the finale, with both teams set to converge on Gamesmaster's base of operations, yet as of this issue, X-Force has only directly faced off against one Upstart (Fitzroy), and has yet to actually cross over and interact with the characters starring in the other series participating in the crossover. That's not necessarily a bad thing - in fact, the relatively limited scope of this crossover, especially at this point in the 90s, is rather refreshing. Yet it is nevertheless odd to have a crossover in 1994 that is this restrained, especially when it is a crossover between New Warriors & X-Force, two of the more "stereotypically 90s" series out there.

Next Issue
Tomorrow, Nightcrawler despairs in Excalibur #76. Next week, the wedding-centric What If? #60.