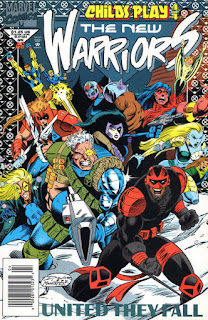 In a Nutshell
The Younghunt ends with Paige Guthrie starting a new game with Gamesmaster.

Plot
The New Warriors & X-Force converge outside the Gamesmaster's Swiss chalet base. Assuming any plan they concoct will be foiled by Gamesmaster's telepathy, the two teams launch a frontal assault on the base. Gamesmaster responds by sending Siena Blaze and his captive mutants, all under his mental control, to fight the two teams, ultimately prevailing. With both teams unconscious, Gamesmaster declares himself the winner. Just then Paige Guthrie emerges and proposes a new game to Gamesmaster: let everyone live, and he gets to play against Paige, X-Force and the New Warrriors for the fate of the next generation of mutants. Amused, he agrees and declares Paige the winner, releasing his captives before disappearing. In the aftermath, the two teams ponder whether their lives are worth the price of this new game, and giving Gamesmaster the idea to influence new mutants. Ultimately, Cable concedes the point, but declares that if people like Gamesmaster are going to treat the survival of mutants like a game, then he intends to make sure it's a game they play to win.

Firsts and Other Notables
"Child's Play" and the Younghunt therein concludes this issue, with Paige Guthrie essentially convincing Gamesmaster to give up and keep his captives (and X-Force and the New Warriors) alive so they (and people like Professor X) can play against him in a new game, one in which they compete to find and mold the next generation of mutants (at least, I think that's what the deal is; it's all kind of vague and unclear). Of course, nothing ever really comes of that; Gamesmaster will appear again in a few more stories in the coming decades, but none of them reference Paige's new game as presented her, and the character never really achieves a higher profile than the one he had as the quasi-leader of the Upstarts up to this point. 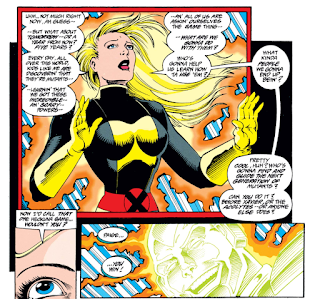 The final panels of this issue depict a bespectacled man in a cabin on an island responding to Cable's declaration that X-Force will play to win the new game started by Paige; presumably, this is meant to to Gamesmaster in his physical body outside the mindscape we usually see him in, but that doesn't quite match how he appeared (in the physical realm) in his first appearance in Uncanny X-Men #283 (in which he was bald, like his psychic avatar, and relatively frail). Whether this is meant to be someone else or the Gamesmaster is never made clear, as we never see this character (or the Gamesmaster in this form) again. 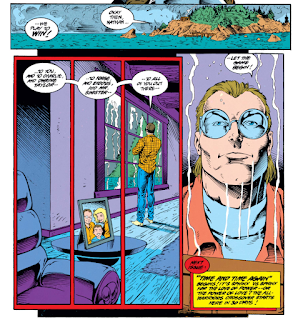 This is also the final appearance of Siena Blaze in a regular Marvel book for awhile; her next appearance will be in the All New Exiles, Marvel's short-lived attempt to do something with the Malibu Comics' universe, which they purchased in 1994 ostensibly to keep it out of DC's hands (as a DC/Malibu merger would give DC a larger market share than Marvel). In addition to Blaze, that book also features Juggernaut and the MLF's Reaper as part of a team consisting of both Marvel & original Malibu characters. When that series (and sub-universe) folds, Blaze will fall into comic book limbo, emerging for a pair of issues in the 00s. So this is pretty much it for her.

Fenris, the other would-be members of the Upstarts involved in the Younghunt, are dispatched off-panel by X-Factor, when they attempted to capture former New Mutant Wolfsbane, something we learn when Cannonball & Rictor contact her to warn her, following the Gamesmaster's defeat. While the acknowledgement of another living New Mutant who would be a target of the Younghunt is appreciated (presumably the Upstarts ignored Rusty & Skids because they're with the Acolytes on Avalon, or, more likely, Nicieza forgot they were technically New Mutants for a hot minute), it's kind of funny they call her after the Gamesmaster is defeated, and not, say, while hanging out on Sam's farm before Fitzroy attacked (also, Polaris appears in that scene wearing her "sexy" metallic gold costume, which causes all kinds of headaches for chronologists - as she stopped wearing that costume well before this story has to take place, for a variety of reasons - to the point where it just has to be ignored to fit this story in its correct place). 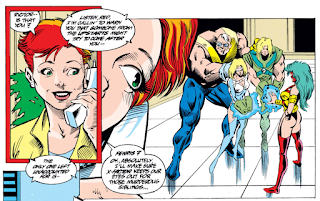 It's outright stated in this issue that Fitzroy is dead as of X-Force #33; as mentioned in the review of that issue, this will turn out to not be the case.

In a winking moment, X-Force & the New Warriors, upon encountering one another outside Shinobi's Swiss chalet, agree to put aside the convention of fighting one another before teaming up, and just team up without the initial fight. Their previous interactions in the "Kings of Pain" story from the '91 annuals is also referenced. 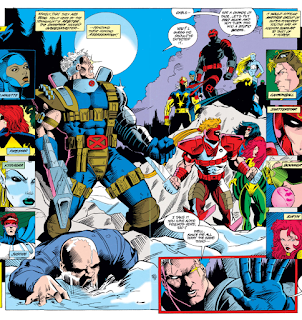 Cable's (new-to-us) telepathic abilities are shown in an X-Force context for the first time, and Domino is surprised by them, referencing her knowledge of his (as far as she knew) minimal telekinetic ability; I can't recall for sure if there's anything in Cable #6-8 (which takes place before this story) that would contradict Domino's knowledge of Cable's telepathy here, but I think it checks out. 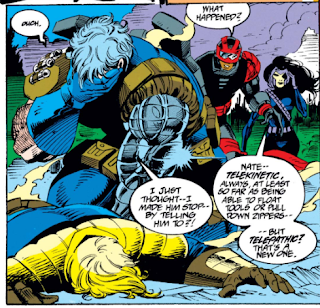 A Work in Progress
Cable does that thing where someone says a funny sounding word and then someone else responds like they sneezed, when he calls Kymaera "Namorita" and she corrects him. 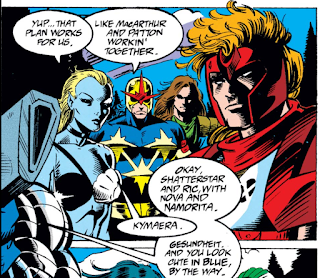 When Gamesmaster takes control of his captive mutants (and Siena Blaze) and sends them into action against the combined New Warriors/X-Force, it's said to be the first time he's used his telepathy not just to read thoughts, but control them as well. 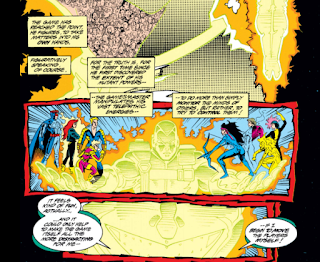 Cable says that if Gamesmaster can take control of Cannonball's mind, he must be pretty tough, which is an odd distinction to make (as Cannonball isn't especially known for being telepathically resistant). 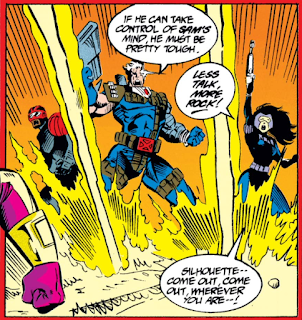 Later, Cable makes the subtext text and admits he considers Sam like a son. 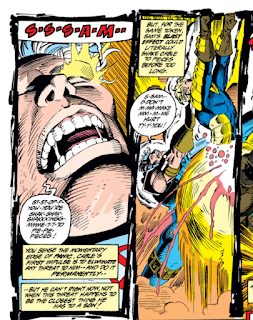 Between issues Paige has shifted into a new form, a sort of weird black rock body. 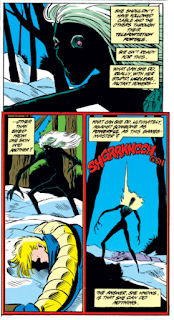 Gamesmaster notes he was unable to telepathically sense her presence until she revealed herself to him, which he chalks up to the eletro-magentic interference caused by Siena Blaze's power. 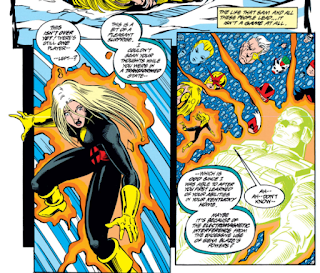 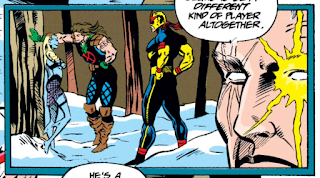 Austin's Analysis
Whatever Jim Lee & Whilce Portacio had in mind, if anything, for the conclusion to the Upstarts storyline they launched upon assuming complete creative control of the two main X-Men titles, it's hard to imagine it was anything close to this, with the Upstarts more or less defeated & disbanded prior to the climax of the story (or off-panel), essentially convinced that further involvement in the Gamesmaster's game simply isn't worth their time, with the Gamesmaster ultimately defeated (vaguely/confusingly) by Cannonball's younger sister, in what amounts to a setup for the upcoming launch of Generation X.  And while that's not the greatest ending to a plotline that's been meandering in and out of the X-books since 1991, it is an ending, and that's something. At the very least, this subplot wasn't simply left to dangle on the vine, unresolved for all time.

Ultimately, then, the best thing about "Child's Play" as a story is the "New Mutants reunion" element to it, as characters long since separated from one another reunite for the first time in ages. It's the perfect culmination to the work Fabian Nicieza has been doing getting X-Force in touch with its New Mutants past. There's also something to appreciate in the scale of the crossover - at a time when anything passing for an event was getting extra-sized issues and additional chapters slapped with the latest cover gimmick du jour, there's a quaintness to the way this crossover unfolds between two relatively un-hyped, normal-sized issues of the series. There's also something fun to the fact that the very 90s Upstarts, who were introduced killing off some of the previous generation's villains in order to prove how kewl they were, have their plotline concluded by two of the 90s-est and ostensibly kewl-est teams around.

No one is ever going to hold up "Child's Play" as an all time great X-Force or New Warriors story, and while it deserves credit for closing the book on the Upstarts, it does so in a manner that in no way even attempts to address the various shifting motivations, goals, and promised rewards of the players involved in the competition depicted throughout the years of its existence. But incomplete and lackluster it may be, the Upstarts do get an ending, and that's probably more than most of us expected.

Next Issue
Tomorrow, Cable teams up with the Acolytes in Cable #10. Next week, Joe Mad comes aboard in Uncanny X-Men #312.