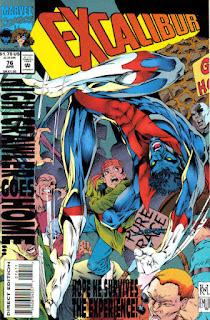 Plot
In a German town, D'Spayre gloats to a captive Margali Szardos as he compels the townspeople to attack one another. In Mississippi, Amanda Sefton visits Nightcrawler, recovering in a hospital from the attack by Graydon Creed. He tells her that Creed is his half-brother and Mystique his birth mother, which prompts Amanda to tell him she needs his help rescuing her mother from D'Spayre. Meanwhile, Kitty misses a call from her dad as Rory tries to stop Britanic from leaving with a hovercraft, saying they still need to study the effect of being lost in the timestream on him. However, When Meggan insists they must aid Britanic, Kitty agrees and the three leave together. Later, Nightcrawler & Amanda arrive in Germany. As Amanda recuperates from the strain of teleporting them across the world, Nightcrawler attempts to save a young child from the angry mob, but is knocked out himself, much to D'Spayre's delight. However, Margali is pleasantly surprised that Nightcrawler has come to her aid, despite her betrayal of him, and realizes D'Spayre has no idea what her son has just given her.

Firsts and Other Notables
D'Spayre, the fear demon who makes people feel, uh, despair, pops up to serve as the villain of this story. We last saw him tormenting a "raw from Phoenix' death" Cyclops all the way back in Uncanny X-Men #144, though he's made subsequent appearances in other series since then. 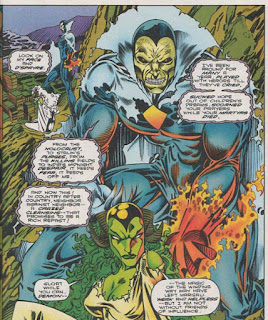 Amanda Sefton's mother (and Nightcrawler's foster mother), Margali Szardos, also appears as a captive of D'Spayre. We last saw her in her first appearance, back in X-Men Annual #4, though she too has made a couple appearances elsewhere since then.

This issue introduces (I think) the concept of the Winding Way, a sort of magical hierarchy/religion which essentially "ranks" magic users, moving them up and down based on their actions, while also at times randomly moving them, with their power levels fluctuating as a result of where they are placed on the Winding Way. Margali is an adherent to the Winding Way, and she (and it) will continue to be used off and on in this series (particularly during Warren Ellis' run), though I don't believe it ever really gets picked up and used much in other series featuring magic users (though I could be wrong about that).

Nightcrawler fills in Amanda (and any readers who missed it) about the events of X-Men Unlimited #4 and his newly expanded family tree. 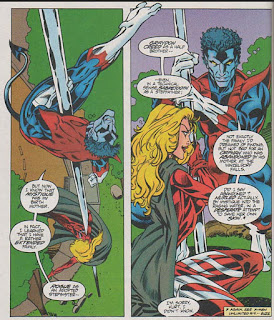 He also says that Mystique died in that issue, though we will shortly find out that is not the case.

A sleeping Kitty misses a mysterious phone call from her dad, the beginning of what will become a long-dangling subplot that outlasts not only the book's current creative team, but the series itself. without ever really being resolved (ultimately, it will get an ending of sorts when it's revealed that Kitty's dad dies during Cassandra Nova's attack on Genosha at the beginning of Grant Morrison's X-Men run). 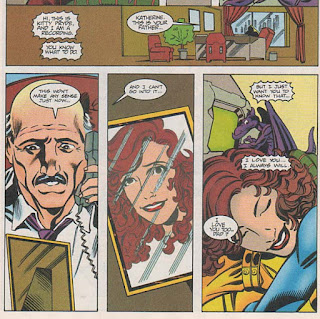 Creator Central
Richard Ashford is back scripting, which means the dialogue is back to being bland and unexciting, but Scott Lobdell is still hanging around, earning a "plot assist" credit on this issue.

A Work in Progress
Rory angsts about last issue's revelation that he's destined to become Ahab. 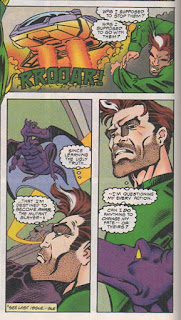 The Grim 'n' Gritty 90s
Amanda references Germany's then-recent reunification as a source for the tensions D'Spayre is playing on to whip the mob into a frenzy.

Artistic Achievements
Some combination of the artists involved in this issue apparently had a difficult time keeping track of Nightcrawler's costume design, as it alternates between his old school look (with a deep V cut into the red) and his more recent one (with the red stripe running the fully length of his body), sometimes on the very same page. 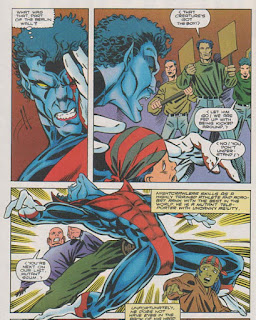 It's in the Mail
Responses to letters in this issue tease Phoenix' role in the upcoming Adventures of Cyclops & Phoenix limited series (which is kinda spoiling that reveal), and also assures readers that Illyana's Soul Sword hasn't been forgotten (it will be a plot point in Warren Ellis' first story arc in about six months).

Austin's Analysis
On the one hand, kicking off a story featuring Nightcrawler & Amanda Sefton (and their mother) makes sense, given that the previous issue reintroduced Amanda to the X-universe after a lengthy absence. Putting her & Nightcrawler in a story together is an effective way to assess their relationship & introduce the character to new readers. On the other hand, given that the previous issue also wrote out one of the team's founding members and reintroduced another in a mysterious new identity, it seems like there's more important things this issue could have tackled than beginning a story about the politics of magic & Nigthcrawler's relationship with his foster mom.

This issue also represents another example of the X-books' "gotta read 'em all mentality" at this point in time, as it takes as its starting point the recent revelations regarding Nightcrawler's parentage from X-Men Unlimited #4. While Ashford does his best to fill in any readers who didn't catch that issue, it nevertheless must have been difficult for anyone who picked up this issue but not that one to read this and not feel like they missed an issue of the series. For people like me who were reading all the books at the time (and/or appreciate the meta-narrative aspect of all the books telling one overarching story), this certainly wasn't a problem, and if anything, the effort put into incorporating the events of X-Men Unlimited #4 into Nightcrawler's "home" series is appreciated. But it nevertheless is another example of just how much the entire line is being written specifically to those types of readers, rather than the casual or single-title readers, at this point in time.

Next Issue
Next week, a wedding-centric What If? #60.
Newer Post Older Post Home
Posted by Austin Gorton at 12:00 PM