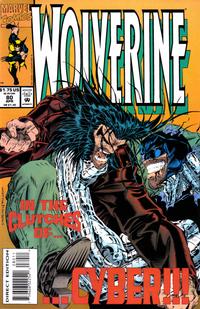 Plot
Wolverine wakes up in Zoe's car, and starts freaking out when he remembers his broken bone claws. In Edinburgh, Cyber is loaded into an ambulance, but he wakes up and commandeers the vehicle. In Alberta, a couple is attacked & killed by Bloodscream, who steals their truck. Back in Scotland, Wolverine tells Zoe about the loss of his adamantium, and she shows him video of a lecture by a molecular biologist named Dr. Munoz, discussing how to bond adamantium to bone. Just then, Cyber catches up to them, and though Wolverine is able to fight him off by triggering an oxygen tank in the ambulance to explode, Cyber manages to slash Wolverine with one of his hallucinogenic claws. With Cyber seemingly dead once more, Wolverine & Zoe reach the ferry and ask to be taken to Muir Island.

Firsts and Other Notables
There's a relatively minor tease in this issue, as Zoe shows Wolverine a video of a lecture being conducted by a molecular biologist, in which he theorizes on the possibility of bonding adamantium to bone. It's clearly meant to suggest a possible way forward for Wolverine to once again have metal bones & claws, but ultimately, nothing much comes of it. 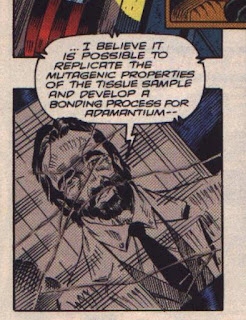 The same scientist also suggests that he's found a possible defect in Wolverine's DNA which could cause trouble for him; I believe this may setting up Wolverine's eventual "feral, noseless" state post issue #100, but I honestly can't recall (it could very well also just be another tease that goes nowhere). 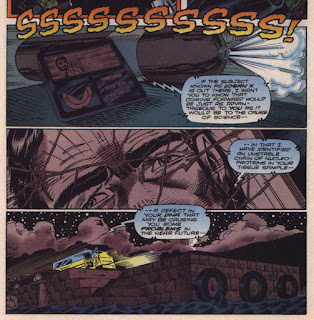 This issue reveals that Bloodscream survived his apparent death in issue #78. 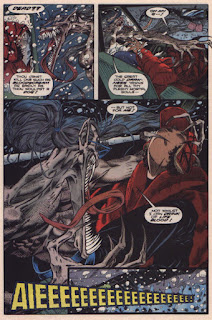 Creator Central
Ian Churchill, continuing his tour of the X-office and putting in his time as a guest/fill-in artist, pencils this issue.

The Reference Section
The title of this issue's story concludes the William Blake line alluded to in the previous issue's title.

NOT The Best There is at What He Does
Wolverine notes that since his healing factor is overtaxed/non-existent at this point, he can't drink as much as he used to. 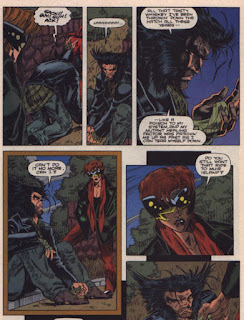 Austin's Analysis
There's honestly not a whole lot to this issue. Its basically an issue-long-fight between Wolverine, Zoe & Cyber (with a brief interlude establishing that Bloodscream is still alive), with the minor novelty of the fight happening almost entirely with the characters in one of two moving vehicles. Inter-cut with the fight scene are some teases that, at the time, seemed like they may lead to something bigger, but that ultimately doesn't turn out to be the case. So all we're really left with is another over-the-top fight between Cyber & Wolverine as Hama draws out Wolverine's arrival on Muir Island.