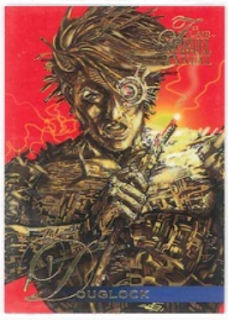 With the end of June looming and with it, the end of my current six month schedule of reviews, I am working on the schedule for the second half of 2018. Obviously, I have fallen way off my schedule (what with it being the end of June, and me still working on May reviews...). So I want to take the start of a new review schedule as an opportunity to get back on track and ahead of reviews (so that when the inevitable real world problems arise, it takes longer for me to fall behind). There are two ways I can do that, and rather than pick one myself, I'm going to turn the decision over to you, the readers.

One option, as I've done before, is to schedule a run of one-review-a-week Retro X-aminations, going back to review older issues I missed (for one reason or another) the first time around.

The other option is simply to take the next "on sale" month's worth of issues (in this case, May 1994) and spread them out to one review a week.

I can make the case for both (Retros are a fun look back at some older stories, the one-review-a-week-for-a-month approach slows things down but doesn't entirely halt the forward progress of reviews), which is why I'm punting the decision to you. Sound off in the comments as to which approach you'd like to see me take to lead off the second half of 2018.

In the meantime, the next batch of previously-scheduled reviews to finish up the first half of 2018 sees more Joe Madureira, the end of the Psylocke/Revanche story along with a look at Gambit & Sabretooth's past together, and the debut of everyone's favorite walking-unresolved-plotline, Douglock!