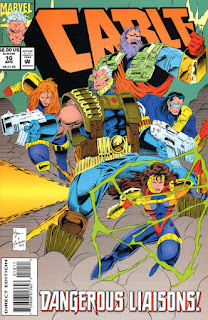 "The Killing Field Part II: Like Lambs to the Slaughter"
April 1994

In a Nutshell
Cable & the Acolytes chase after Omega Red

Plot
Omega Red attacks the Tyuratam space center, looking for information about Epsilon Red as part of his quest to cure himself of his death spore virus. Shortly after he leaves, Cable & the Acolytes arrive, and realize that the next step in Omega Red's quest will require him to be in space, meaning he is likely going to try to board Avalon from Magneto's old arctic base. Cable & Katu devise a way to breach the base's security, but once Cable & the Acolytes are inside, Cable is stunned to find Omega Red there, already a captive. He realizes he's been setup, and the Acolytes admit they need him in order to bring certain systems aboard Avalon back online. As Cable turns to attack his erstwhile allies, he is stopped by a voice behind him: Colossus, leading the rest of the Acolytes.

Firsts and Other Notables
Much of the plot of this issue involves Cable & the Acolytes breaking into Magneto's arctic base ahead of Omega Red (only for it turn out it's all a ruse to trap Cable). Putting aside the oddity of Magneto's followers having to break into his former base, its presented here like Magneto having a base in the Arctic is a well-established thing when, in fact, it's not. He's been known to use one or more Antarctic bases, but that's not the same thing.

While preparing to infiltrate said base, Katu fills Cable in on his past with Omega Red, in which Omega Red killed Katu's family on orders from the Soviet government, as Katu's power was interfering with their communications. It's all well and good, but also not terribly important as Katu isn't exactly a long-standing character with tons of appearances in his past or future. 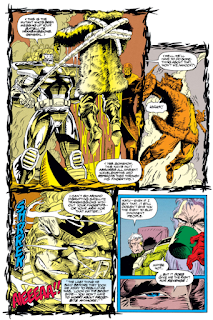 Eric Kleinstock is shown amongst the Acolytes on the closing splash, despite having been killed by Tom Corsi in Uncanny X-Men #298; he'll disappear between this issue and the next (similarly, Rusty does not appear with the Acolytes in this issue, but will be present in the next). 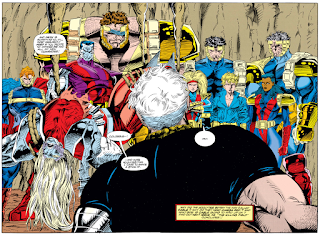 Artist M.C. Wyman is erroneously credited as "W.C. Wyman" in this issue.

A Work in Progress
Omega Red attacks the Russian Tyuratam "Terry Adams" space station, which was introduced/featured in Wolverine #66-68. 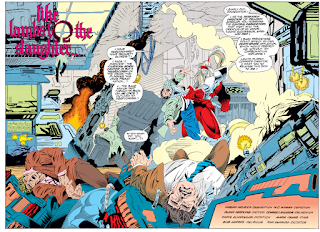 The Acolytes use "By the Savior's white main" as an oath/exclamation.

The Grim 'n' Gritty 90s
Omega Red is given all the Epsilon Red information on a compact disc. 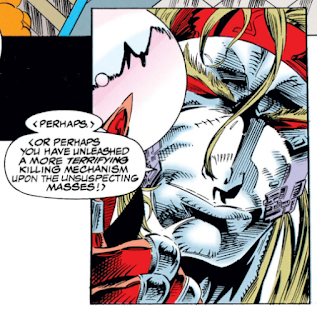 Austin's Analysis
Revealing that the Acolytes have no interest in Omega Red, but that he is instead a means to the end that is Cable, is smart. Not only does it make the story about the title character, instead of just a story the main character happens to be involved in, it also follows up on a bit of continuity for Cable (albeit something established in another series): the fact that Magneto's current orbital space station is made from parts of Cable's, and that Cable modified some of the systems therein when aboard Avalon. Of course, that reveal also has the side effect of continuing Omega Red's descent into becoming a jobber of a villain. From the central villain of Jim Lee's solo X-Men run to a pawn of the one-off Soul Skinner and now the Acolytes in just two stories (with an unremarkable Iron Man story I didn't review in that run as well), it's hard to believe this guy was ever considered a worthy addition to Wolverine's Rogues Gallery, let alone one of the next big X-villains.