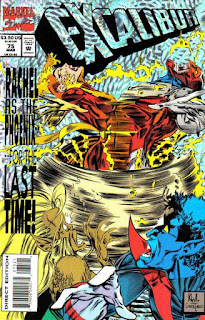 In a Nutshell
Phoenix takes the place of Captain Britain in the timestream, who emerges as Britanic.

Plot
Excalibur returns from the wedding of Cyclops & Jean Grey, with Rachel particularly jubilant, as she now believes it is more likely she may be born into this timeline. However, once they arrive on Muir Island, Meggan confronts Rachel, telling her she can no longer ignore Captain Britain's calls for help. Just as she's about to explain what's happening to the rest of the team, Amanda Sefton arrives, answering Nightcrawler's call for help about Meggan's earlier condition, which causes an angry Rachel to storm off. She once again partially transforms into Captain Britain, and after a heart-to-heart with Kitty, realizes she can't hold off the inevitable. Using Meggan as an anchor, Amanda creates an opening in the timestream, and Rachel is able to find Captain Britain. Saying goodbye to her friends, she pulls him out and takes his place, disappearing into the timestream. However, the Captain Britain who emerged from the timestream is changed, and tells everyone to call him "Britanic"!

Firsts and Other Notables
Phoenix leaves the series as of this issue, taking Captain Britain's place in the timestream (which will eventually spit her out in Cable's future, enabling her to found the Askani order and become Mother Askani, thus arranging to save her quasi-sibling from Apocalypse's techno-organic virus and seting him on the path to becoming Cable). This is actually the last issue of this series she will appear in, and, not counting Mother Askani appearances, the last time Rachel Summers will appear anywhere until a brief run of issues in Cable circa 2000 (after which she'll disappear again until X-Treme X-Men in 2003, when Chris Claremont starts writing her again and works her back into the X-Men), bringing to an end a run for a character who, a few periodic absences aside, has been a consistent recurring presence in one X-book or another since the mid-80s. 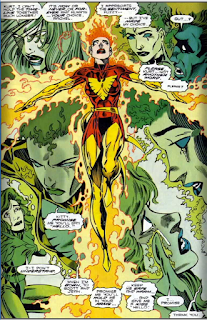 In place of Phoenix, Captain Britain emerges from the timestream (where he's been lost since being unceremoniously dumped there between issues #67 and #68), only know he's talking in flowery language and calling himself Britannic. This change is often attributed to a desire of the Marvel UK imprint to introduce a new Captain Britain (thus the need to come up with a new identity for the current one), but in actuality, Scott Lobdell was simply looking for ways to shake up the team and decided on this. Thankfully, it won't last long, as once Warren Ellis comes aboard he more or less transistions Brian back to his "standard" Captain Britain persona and that has mostly stuck since then, making Britanic little more than a weird early 90s blip in the character's history. 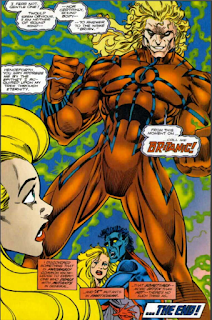 This issue also features the retrun of Nightcrawler's occasional girlfriend/foster sister, Amanda Sefton, now using the codename "Daytripper" (presumably a play on "Nightcrawler") and dudded up in superhero-esque attire. She last appeared in Uncanny X-Men #278, the first part of "The Muir Island Saga" (and then disappeared from the subsequent chapters), having been hanging around Muir Island as part of the ad hoc Muir Island X-Men that battled the Reavers. This is the first time she & Nightcrawler have interacted on-panel since their apparent breakup in Uncanny X-Men #204 (though Amanda did visit Excalibur's lighthouse in Uncanny #253 looking for him; he wasn't home). She will remain a part of the series through Warren Ellis' run, and while there's no formal declaration made, it can be considered that she joins the team as of this issue.

While in the timestream, both Rory and Amanada see an image of Ahab, whom Rory recognizes as himself, ratcheting up the "Rory is Ahab" subplot.

Like X-Factor #100, this is a double-sized anniversary issue with a fancy cover (this one has a prismatic background over which the art is laid), using the same layout (with the cover blurb in a column to the right of the main image). It was also released without the fancy cover and for a lower price.

A Work in Progress
Much of this issue is narrated from the perspective of Rory Campbell, and at one point, he references Rachel's future using the term "Days of Future Past". While at this point in time, the various X-characters have dealt with people and events from that particular alternate future multiple times, that term has always been used by creators & fans, outside the universe of the books, to label it. I believe this is the first time a character in-universe has referenced the title of the story which introduced the timeline in reference to it.

Since last issue, Meggan has changed from her more animalistic form to a more fairy-like one, in anticipation of Captain Britain's return. 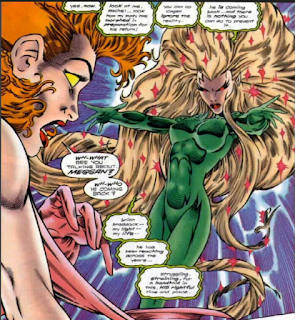 It's said that Captain Britain is being drawn to Rachel specifically because she’s a temporal anomaly.

Rachel Summers, Crybaby
Flying home from Cyclops & Jean's wedding, Rachel is especially jubilant, as she believes their marraige makes it more likely she'll be born in this timeline (since Scott & Jean were married when they had Rachel in her timeline), which she feels makes her more real, for some reason. 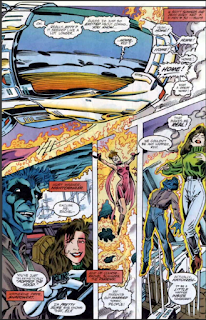 She is also wearing a different than she wore at the cermony, which could just be something she changed into afterwards (both Kitty & Kurt are similarly not wearing formal attire), but looks very much like its supposed to be a bridesmaid dress.

When Amanda shows up, Rachel immediately storms out, angrily wondering what Amanda is doing there, as Rachel can do anything Amanda can. It's probably just an excuse to get Rachel alone (so Kitty can later approach her and convince her she needs to help Captain Britain), and can be written off to the swirl of emotions Rachel is feeling, but it comes off like the two have history together and/or that Rachel has some thing against magic users, and neither of those have ever been established before. 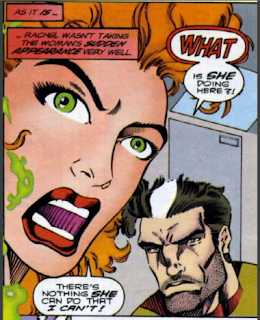 In a sequence that seems mostly to fill some pages and ratchet up the pathos, Kitty takes Rachel on a tour of her past (in the future) as a hound, and we see the Hound pens for the first time. 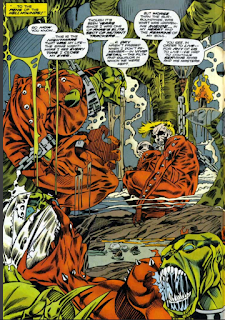 Human/Mutant Relations
Rachel is so excited after the wedding that she almost crashes Excalibur's ship into Rory, then laughs off his apparent fear at his near-demise. This prompts Rory (who may or may not be Ahab) to point to the situation as an example of why humans fear mutants. 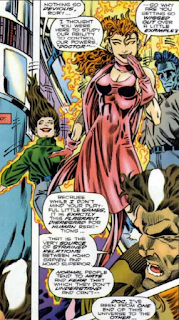 Young Love
Driven by her post-wedding bliss, Rachel impulsively kisses Rory, just to add a little more angst into the whole "Rory-is-Ahab" thing even though Rachel is being written out of the book. 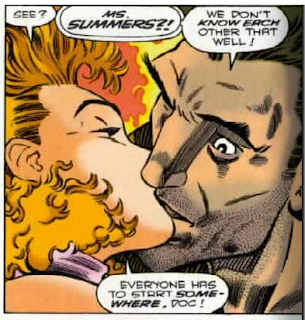 Austin's Analysis
Between writing out Phoenix and bringing back Captain Britain (as Britanic), this is another "reset the status quo" issue. Coming just four issues after the last such story, in #71 (which was in itself just formalizing a shakeup that began with issue #68), it's starting to feel like the real status quo of this series is instability (and not in a good, "anything can happen!" kind of way). While the exit of Phoenix has been teased for awhile (first being setup in the aforementioned issue #71), and it's nice to have Lobdell back on the book so the characters at least sound somewhat distinctive, he decides to anchor this issue (and wring it for every last bit of pathos) on a character beat that simply doesn't work. The idea that Rachel is, in the wake of Scott & Jean's wedding, supremely happy because it means she's more likely to be born in this timeline makes no sense. For one thing, that's not how Marvel Time works (and Rachel knows this firsthand). Time travelers create alternate realities, so the Cyclops & Jean Grey of this timeline having a daughter has no impact on the existence of their daughter from another timeline (already born of parents who have lived vastly different lives). Just the fact that Rachel is around to be excited about "her" prospective birth means whatever children Cyclops & Jean Grey won't be "her" (and this whole line of thinking also disregards the hints Claremont made about the multi-versal uniqueness of Rachel Summers, which suggests regardless of their marriage, Cyclops & Jean Grey will never sire a Rachel Summers, because there is only one in the entire multiverse, but that's a less egregious sin on Lobdell's part).

On top of that, there's not really any need to pile on the angst of Rachel being at her happiest just before she has to say goodbye to everyone she knows and loves. Phoenix making a willing sacrifice of herself in exchange for Captain Britain is plenty emotional and poignant already, without Lobdell piling on this "I'm so happy I'll be born now!" business to up the stakes. Phoenix leaving the series certainly is a big deal, and getting Captain Britain back (in some form) is important, and hey, it's nice to see someone remember Nightcrawler's sorcerer girlfriend/stepsister. But there's just so much angst piled on top of angst, and all these changes are coming before any of the last wave of changes to the title have had any time to gel, that it's hard to get too worked up about any of this. Certainly not to the level that the departure of the character who ostensibly founded the team probably deserves.