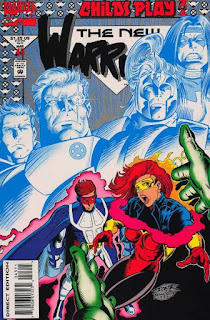 In a Nutshell
Karma returns as the New Warriors are drawn into the Younghunt.

Plot
As the Gamesmaster explains the details of the Younghunt to the captive Cannonball & Boomer, Night Thrasher briefs the New Warriors on his and Justice's undercover sting of Shinobi Shaw. They are interrupted by an attack from the armored Tribunal, operating in Graydon Creed's name. In Madripoor, Moonstar & Empath are attacked by Siena Blaze while trying to locate Karma, but Karma manages to take control of Blaze. Back in New York, the New Warriors defeat the Tribunal, aided by the sudden arrival of Justice, who reveals that Firestar is the next target of the Younghunt, and he needs to bring her to Shinobi Shaw in order to maintain his cover. Firestar reluctantly agrees to play along, and Justice delivers her to Shaw, who reveals he plans to use her as bait to get close enough to the Gamesmaster to use the other captive mutants to overthrow him and the rest of the Upstarts. However, though Shaw believes his plans are shielded from Gamesmaster, in truth, Gamesmaster is well aware of them. But just then, Siena Blaze contacts him, announcing that she's captured three more targets: Moonstar, Empath & Karma.

Firsts and Other Notables
Part two of "Child's Play", this issue brings the New Warriors, whose member Firestar is a former Hellion, into the story.

Former New Mutant Karma, last seen cutting ties with her criminal uncle at the conclusion of the not-terribly-good "Lazarus Project" story in Wolverine #30, pops up in this issue, being sought out by Moonstar & Empath (and, of course, being a target of the Younghunt). She'll stick around for the rest of the story, then disappear back into comic book limbo for awhile once again. 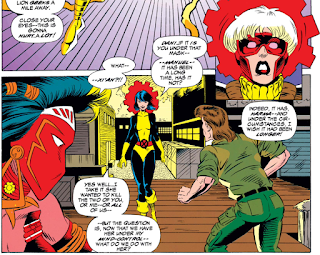 The conclusion of this issue reveals that Shinobi is plotting to overthrow the Gamesmaster and all the other Upstarts, gaining all their powers in the process. Which is a hat-tip to one of the numerous "prizes" of the Upstarts contest that were thrown out shortly after the introduction of the characters, when none of the creators involved could seem to agree on what the Upstarts stood to win from their "kill designated mutants" game. 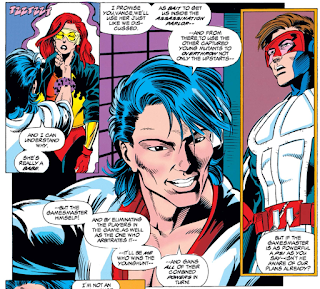 This issue (and the next) feature a trade dress of sorts, with the X-Force and New Warriors icons framing the central image, despite the fact that the X-Force chapters of the story don't use the same dress.

A Work in Progress
The Gamesmaster says the Mindstream (the big yellow place where he routinely meets with the Upstarts) is the one place he can be himself.

The bulk of the action in this issue comes from the New Warriors fighting some armored goons called the Tribunal; though never explicitly spelled out, they are agents of Graydon Creed (who called himself Tribune in the Sabretooth limited series and wore armor similar to the armor worn by the goons in this issue). 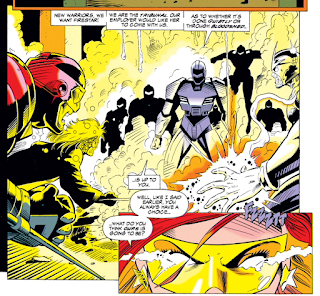 Karma, to her credit, immediately suspects that Moonstar is her old teammate Dani Moonstar.

Austin's Analysis
Given that both series are written by Fabian Nicieza, feature groups of young adult heroes ostensibly arrayed as "extreme" in contrast to older, more traditional, superheroes, a few of whom also share a past together as former New Mutants & Hellions, it's somewhat surprising it took this long for a direct crossover between the two books (New Warriors #31 was much more of a one-off, standard "guest-starring" kind of thing). But given the New Mutants/Hellions connection, it's not surprising that relationship is used as the springboard for the crossover, nor is it surprising, given the relative popularity of the X-books in general and X-Force in particular, that a plotline from that corner of the Marvel Universe are used as the foundation for the crossover's plot.

As a result, while this issue isn't really a case of the title characters guest-starring in their own series (the only actual members of X-Force to appear are the captured Cannonball & Boomer), it is very much is a case of the New Warriors reacting to X-universe things rather than bringing much of anything of their own to the party. (ie this isn't like a New Warriors villain teaming up with an X-Force villain and the two teams combining to face them or anything like that). Just as X-Force itself is adopting the Upstarts from the X-Men books, now New Warriors is taking them on as well. Which, for readers coming to this series from X-Force, is just fine. For readers of New Warriors who might have picked up the first chapter in X-Force, this probably reads a lot more like that other series taking over the book, making it another example of the juggernaut the X-books are at this point in time, where the expectation is that if you're reading one of them, you're reading them all, and if you're not, that's not really Marvel's problem.