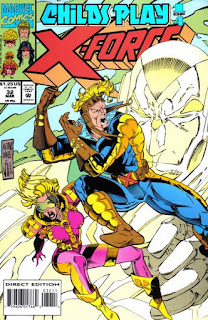 In a Nutshell
Cannonball & Boomer are captured as the Younghunt begins

Plot
In Nova Roma, Magma is captured by Fenris, but Empath manages to escape. At the Hellfire Club in New York, Justice meets with Night Thrasher and tells him he's learned the next targets of the Upstarts are the surviving members of the New Mutants & Hellions. In Kentucky, X-Force arrives at Cannonball's family home, where his sister Paige tells them how Cannonball & Boomer were captured by Siena Blaze. Elsewhere, Gamesmaster calls a meeting of the Upstarts, reminding them not to kill their targets, and pointing out that would-be members Fenris are already in the lead of the latest game. Back in Nova Roma, Fenris attempts to capture Empath, but are stopped by Moonstar, while Fitzroy confronts X-Force at the Guthrie farm. In New York, Shinobi Shaw informs Justice to either bring the next target to him, or else let one of the other Upstarts take a crack at her, and Justice flies off to confront his girlfriend, the former Hellion known as Firestar.

Firsts and Other Notables
This issue kicks off the four part "Child's Play" crossover between this series and New Warriors, which also effectively wraps up the long-running Upstarts subplot via the latest challenge set to them by Gamesmaster, the "Younghunt", in which the surviving New Mutants and Hellions are made targets of the game.

As a result, we'll see a bunch of long-absent New Mutants' pop up throughout the story, starting this issue with Magma & Empath (last seen in New Warriors #31 undergoing an ill-advised retcon that wiped out Nova Roma). 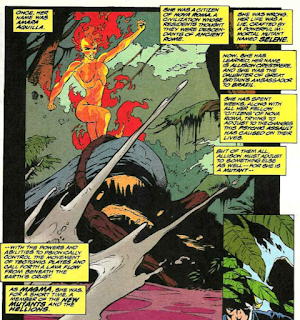 Moonstar, last seen escaping with the new MLF in issue #28, also pops up to save Sunspot's mother Nina DaCosta, whom we haven't seen since she dropped Sunspot back off at the X-Mansion following a vacation in New Mutants #43. 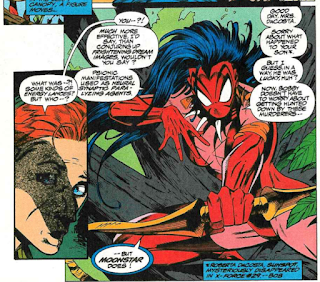 This issue is the first appearance of Cannonball's youngest sister (and, I believe, the next-oldest Guthrie sibling after Sam), Paige, who will shortly get involved in the "Phalanx Covenant" crossover and then become one of the founding members of Generation X as Husk. She'll also eventually become a full-fledged member of X-Men (where she'll infamously have sex with Archangel in the sky above her mother, because Chuck Austen is a terrible writer), eventually settling in as one of those characters who would occasionally pop up on Utopia and continue to exist, but never really be featured much. 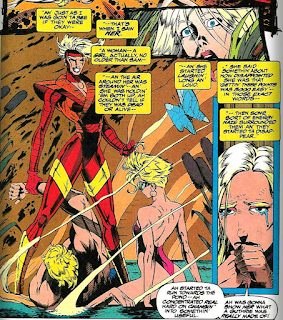 Paige has the mutant ability to shed her skin to reveal a new form underneath (which, like a lot of the newer Generation X characters' powers, is very Morrisonian in the way it's both cool-sounding at first, but confusing when you start to think about the mechanics of how it would work), though the logistics of how it works in practice must have still been being worked out behind the scenes; in Generation X, it mostly manifests in terms of changing her physical makeup (ie, she tears away her skin to reveal a metal form) while leaving her basic human form intact, whereas here its said shed her skin to become a sparrow. 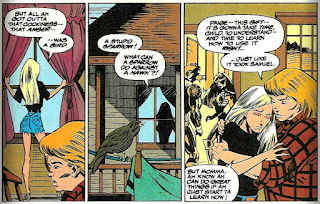 This is also the first appearance of Paige (and Cannonball's) younger brother Joshua Guthrie. While Paige is clearly being introduced in this story ahead of her role in Generation X, it seems like Josh was created just to have another Guthrie for X-Force to talk to. But he too will eventually come to the X-Mansion (after first playing the "Romeo" role in a terrible Romeo & Juliet/Hatfields & McCoys mashup pastiche, see above re: Chuck Austen) as part of the fourth generation of "new students" in the post-Morrison New X-Men, with the codename Icarus (he eventually develops red Angel-like wings). 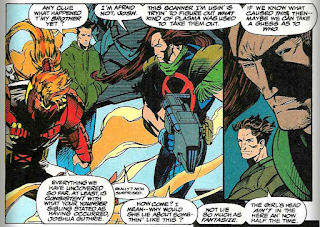 Fenris, who were suggested to be Upstart-adjacent in the Adjectiveless Omega Red storyline (here, it's suggested that the Upstarts declined them full membership) are shown here to be auditioning for a place with the group.

Domino makes an offhand remark at one point suggesting she's married; this will eventually be confirmed in a later Domino miniseries that delves into her past and introduces her husband. 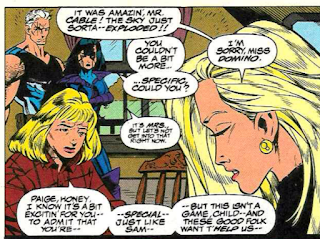 It's worth pointing out that Shatterstar, who first appeared in New Mutants #100 and arguably joined the team before it became X-Force (and thus was technically one of the New Mutants, albeit for only a short time), isn't targeted by the Upstarts in this story, so presumably Nicieza (who scripted New Mutants #100) doesn't consider him to have ever been part of the New Mutants.

There's a couple of scenes in this issue involving Justice, one of the New Warriors, who at the time was involved in a storyline in his series in which he was infiltrating the Hellfire Club. At issue's end he's told by Shinobi that former Hellion (and Justice's current girlfriend) Firestar is a target, setting up the next chapter of the crossover. 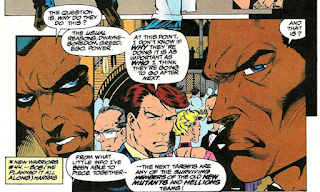 Creator Central
Scott Lobdell & Chris Bachalo receive a special thanks in the credit; presumably, they were already developing Generation X at this point in time and filled Nicieza in about Paige.

A Work in Progress
This issue briefly revisits the Hellfire Club party from X-Men #29, and both Archangel & Psylocke pop up in one panel. 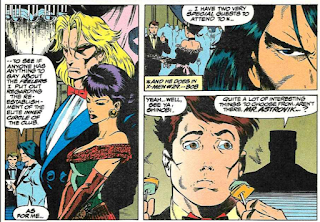 We get another "all the Upstarts on the Astral plane, talking to Gamesmaster" scene here, which sheds some light on the Upstarts' various motivations. 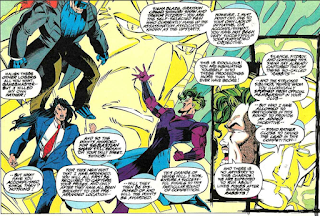 Gamesmaster points out that, thus far, the Upstarts haven't been very good at killing their targets, a fourth-wall wink acknowledging what plenty of fans had already pointed out.

Similarly, he specifically tells the Upstarts that the targets of the Younghunt are NOT to be killed, just captured and brought to him (because of course, now they're targeting characters the creators don't want killed off to establish how badass and cool they are, unlike Sebastian Shaw or the Reavers, so in order for the villains to succeed and advance the story without looking like complete failures, the rules of the game have to be changed).

Cable uses the futuristic curse word "flonqing", which was first used in his solo series.

Fitroy pops up wearing some new armor the early 90s threw up all over. 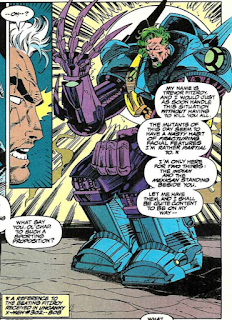 Austin's Analysis
More or less since the departure of Rob Liefeld, Fabian Nicieza has worked to re-establish this series' roots as the offshoot of New Mutants, bringing former New Mutants like Rictor & Sunspot back into the fold and embracing, rather than denying, the history of the characters and series. Arguably, all of that comes to a head with "Childs Play", as the Upstarts target all the remaining former New Mutants members, as well as their longtime foes/rivals, the Hellions. As a result, we get a story built on the idea that a good chunk of X-Force were once New Mutants, and featuring many of those characters who have been long-since sidelined. Here, we get Magma & Empath, as well as the previously-introduced Moonstar (who may or may not be Dani Moonstar but totally is, you're not fooling anyone Nicieza), with Karma teased for future chapters. "Child's Play" is, amongst other things, a big ol' New Mutants reunion, using the Upstarts as a vehicle to bring it about.

In terms of the story, this is a pretty standard "part 1" setup chapter, though Nicieza zhuzhs it up a bit by essentially starting in media res, with the Younghunt already on and Cannonball & Boomer already captured, going back to fill in the details along the way, then gradually working in the New Warriors stuff to setup the next chapter. Whatever Jim Lee & Whilce Portacio had planned (if anything) for the Upstarts when they introduced them, its hard to believe a protracted New Mutants/Hellions reunion was one of their plans, but Nicieza is doing his best to make lemonade out of the relative lemons the Upstarts have become, and his efforts get off on a strong foot with this issue.