100 Things X-Men Fans Should Know & Do Before They Die 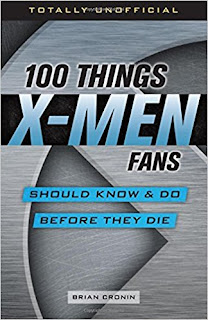 100 Things X-Men Fans Should Know & Do Before They Die is the latest installment in Triumph Books' "100 Things...Fans Should Know" series, which, as the name suggests, catalogs the must-see, must-do, and must-know things for fans of assorted comic books, TV shows, bands and sports teams. With this volume, author Brian Cronin (the man behind the long-running "Comic Book Legends Revealed" articles for Comic Book Resources' "Comics Should be Good!" blog, as well as two previous books of comic book legends) provides new and long-time fans alike a one-volume guide to Marvel's Merry Mutants, highlighting important characters, creators, stories and issues from the fifty-five year history of the X-Men. While the format breaks each entry into a single numbered item, and each chapter is presented in a seemingly-random order (ie it doesn't start in the 60s and end in the present day), the book is an engaging read, as Cronin crafts a narrative history of the X-Men even as he jumps from character info to creator info, from behind-the-scenes stories about crafting specific issues to entries on the various films,  preventing the book from reading like a dry recitation of facts in chronological order.

Similarly, Cronin's writing style, familiar to the many readers of his regular columns online, is light and entertaining. He shows a clear love of the material alongside his knowledge of it, and always treats it seriously, but also isn't afraid to milk some of the more ridiculous or questionable elements of the franchise for humor at times (such as in his repeated railings on Professor X for the idea of sending Jean Grey into battle against Magneto the same day she joins the X-Men). And while regular readers of his "Legends Revealed" columns will spot some familiar stories and facts (such as the aborted notion of Wolverine being an evolved wolverine rather than a mutant in the traditional sense), where those previous "Legends" served as standalone snippets of comic book history, here they are woven into the overall story of the X-Men, and given additional context.

Another strength of the book is Cronin's ability to use each entry in the "100" list as a stepping stone to a larger discussion of a particular piece of X-history; rarely is any given entry only about its stated subject. For example, in his examination of longtime & influential editor Bob Harras, he uses the entry to not only tell the story of Harras' impact on the franchise, but also provide an editorial history of the X-Men from the Giant-Size relaunch to Harras' tenure. Harras remains the "thing to know" of that chapter, but the information provided extends far beyond him.

Additionally, Cronin does an excellent job of using the subject of each chapter as a springboard into the next. While a look at the table of contents suggests a random order to the titular 100 things, the flow of the chapters is one of the book's highlights. For example, the chapter on Bob Harras leads into the chapter on Jim Lee (as Harras brought Lee onto Uncanny X-Men, then sided with him over longtime writer Chris Claremont when the pair differed over the direction of the series); the Jim Lee chapter in turn segues into a chapter on the popular 90s-era animated series, which was heavily inspired in overall design and in some specific stories by Jim Lee's work.

Of course, one of the limitations of applying Triumph's "100 Things..." model to pop culture phenomenon like the X-Men is that the list of available things to "do" is much more limited than with, say, a sports team (with stadiums & museums to visit, foods to eat, etc.), but the book manages to highlight at least a few "action items", including attending a comic convention, and listening to the exceptional podcast "Jay & Miles X-Plain the X-Men". And, for all of Cronin's exhaustive knowledge of the X-Men, there are a few errors which pop up over the course of the book, but most are of a technical nature that don't impact the information being imparted (like the fact that the Changeling who died impersonating Professor X in the Silver Age was a mutant, not an alien, or that the issue of Fantastic Four that dealt with the return of Jean Grey after her apparent death was #286, not #287).

Ultimately, 100 Things X-Men Fans Should Know & Do Before They Die is a must-read for fans new and old. Even for those well-versed in the minutiae of the X-Men, there are plenty of new bits of info to be discovered, and there is definitely a benefit to having even familiar information laid out in Cronin's affable & entertaining style, whereas new readers (particularly those intrigued by the films but looking to dip their toes into the wider world of the X-Men) will find much to learn without feeling too overwhelmed by the at-times byzantine continuity and long publishing history of the franchise. The end result is an enjoyable book that works both as a how-to guide for newcomers looking to separate their Wolverines from their Wolfsbanes, and an essential reference for diehard fans who can chart the Summers' family tree from memory.

100 Things X-Men Fans Should Know & Do Before They Die by Brian Cronin is available now from Amazon and wherever books are sold. A copy of the book was provided for this review.