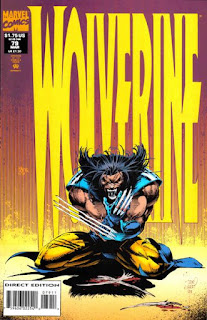 In a Nutshell
Cyber breaks three of Wolverine's claws.

Plot
Wolverine is surrounded by SAS troops at a bank in Edinburgh as he tries to withdraw money from his Landau, Luckman & Lake trust fund. LL&L agent Zoe Culloden calls off the troops, explaining that someone claiming to be Wolverine assaulted the bank earlier. Wolverine recognizes him as Cyber. Elsewhere, Cyber forces a professor to show him the bones of William Burke; hallucinating, he sees Wolverine's adamantium skeleton, and intends to claim it for himself. Meanwhile, Zoe brings Wolverine to her office, where she attacks him, believing him responsible for the death of her mentor, Chang. Wolverine gives her his Honor Sword, telling her to scan it for the blood of Chang's true killer. He then leaves, but is attacked outside the office by Cyber. Angry that his adamantium is gone, Cyber snaps off the claws on one of Wolverine's hands, but is then felled by a filing cabinet dropped on him by Zoe, who has verified that Wolverine didn't kill Chang. As SAS troops arrive on the scene, Wolverine & Zoe slip away, heading for Muir Island.

Firsts and Other Notables
Having already battled him twice over in Marvel Comics Presents, this issue marks the first appearance of Cyber in this series, and he makes his presence known with a bang, breaking Wolverine's bone claws on one of his hands. The claws will remain broken for a time, as they gradually heal back to their original length over the next few issues, and Hama will continue to use Cyber off and on throughout the remainder of his run, including in the climax of his run, which will trigger the next big change in Wolverine. 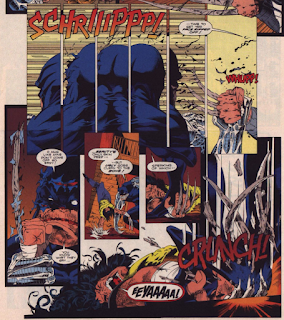 This is the first appearance of Zoe Culloden, an agent of the extradimensional law firm Landau, Luckman & Lake, and protege of the firm's previous representative in this series, Chang (who appeared back in issue #5). As the issue opens, she believes Wolverine is responsible for Chang's death, but he manages to prove to her that it was Bloodscream who killed him (in issue #6). Zoe will be a recurring presence (along with a few other LLL agents) for the rest of Hama's run as well, before eventually settling in for a recurring role in Deadpool's solo series. 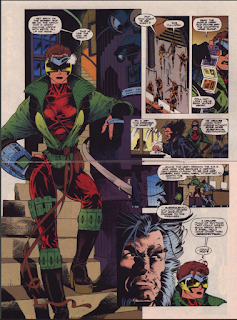 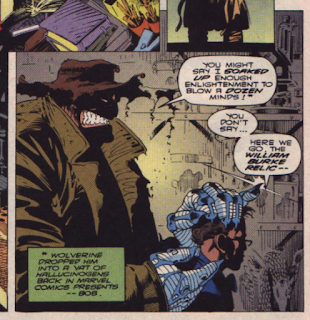 The Reference Section
The title of the story is a play on the first line of the famous William Blake poem, "The Tyger": "Tyger Tyger, burning bright" (which, of course, is also the inspiration for Madripoorian crime boss/occasional Wolverine love interest, Tyger Tiger, as well).

Austin's Analysis
The moment it was revealed that Wolverine had bone claws, a Chekov's Gun was created, in which one immediately starts to wonder how long it will be before the newly-vulnerable claws are broken. This issue fires that gun, and while that's a mildly significant moment (structurally, at least, moreso than narratively, as we'll see the breaking of the claws really doesn't turn out to be that big a deal for Wolverine), it's the character who does the breaking that is arguably more significant. Cyber was created by Peter David and has thus far appeared only in Marvel Comics Presents (and a David-penned X-Factor story), but he was introduced as an old foe of Wolverine's whom Wolverine feared above all others. It was an attempt by David to shoehorn the character into the upper echelon of Wolverine's Rogues Gallery, and while Larry Hama isn't going so far as to directly agree with importance in this story, by bringing the character into this series, the closest thing Wolverine has to a "main" creator at this point is at least legitimizing Cyber as part of that Rogues Gallery. In fact, between Cyber and the reintroduction of Landau, Luckman & Lake (itself a creation of Claremont), this issue actually lays a lot of groundwork for the remainder of Hama's run (with both Cyber and LL&L popping up fairly regularly throughout it), and in that regard, it's an important issue to the post-adamantium period, even if the thing it's most remembered for is the very fan-friendly claw breaking moment.
Newer Post Older Post Home
Posted by Austin Gorton at 12:00 PM