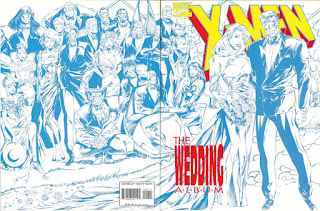 Plot
Jubilee helps Jean go through some of her old clothes, and the pair discuss Wolverine's absence and Jubilee's less-than-positive feelings about marriage. When Jean's fashion designer friend arrives to drop off her wedding dress, Jubilee discovers Jean's diary and, despite knowing better, decides to read it. When Jean returns and discovers Jubilee, she's mostly mad because, while the diary represents her private thoughts, Jubilee should have known that Jean would have talked to her about any of them, had she asked. Jubilee apologizes, and admits that reading about Jean's relationship with Scott through the years has given her a better appreciation for marriage, and the pair leave to check out Jean's dress.

Firsts and Other Notables
This is a magazine-sized special meant to celebrate/milk the wedding of Cyclops and Jean Grey. The front half is a story involving Jubilee reading Jean's diary which serves as a survey of the Scott/Jean relationship, while the second half is mostly pinups (often overlaid with snippets of text) of the guests at the reception, in the guise of a video being shot by Kitty Pryde as a wedding gift to the couple.

Jean's wedding dress is designed by one of her old modeling friends, Nicole Miller. In addition to being a rare reference to Jean's short-lived modeling days (as seen in X-Men #48, during the time when the X-Men were broken up and doing their own thing), Nicole Miller is a real-world fashion designer, and I believe Marvel actually reached out to her to have her design the dress (she is at least credited for it in this issue). 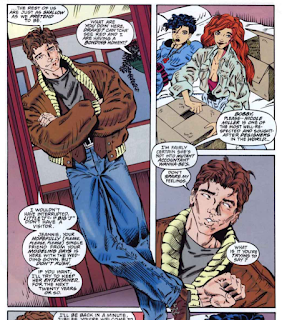 Jean's diary is presented as blocks of text running alongside a single panel on each page, but the layout is super awkward, with the text not quite fitting on the page (and thus overlapping into the border of the images), making it harder to read (the blue, underlined text also makes me think someone forget to close their HTML hyperlink tag, but that's not really 1994's fault). 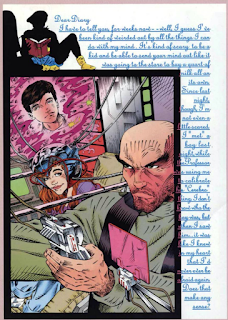 I'm also not sure who decided a blue-ink cover was a good idea, instead of a full color one (the blue ink makes it seem half-finished, even though the whole thing is meant to be more of a "prestige" presentation).

Another rarity in this issue is an appearance by Jean's niece & nephew, Gailyn & Joey, who appear in one of the reception "video" pinups. Last seen in X-Factor #40 being turned over to their grandparents for care (since their mother was - and still is - MIA), they'll appear in the actual wedding in X-Men #30 as well. 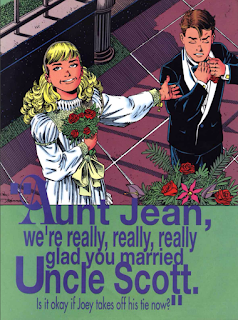 A Work in Progress
The masthead is overlaid on top of an image of Cyclops & Jean taken from a chapter of the "Dark Phoenix" which, of course, means that, technically, it's not Jean in the picture, but Phoenix, which is kind of funny (yes, I know, for all intents and purposes they're one and the same at this point, but still). 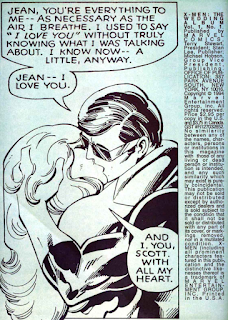 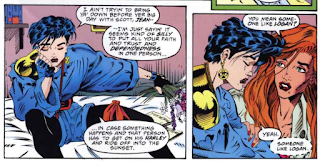 In one of the diary entries, Jean mentions "meeting" Scott for the first time, a rare reference to the Classic X-Men backup story about Cyclops' time in the orphanage, in which a young Jean made telepathic contact with him while testing Cerebro. 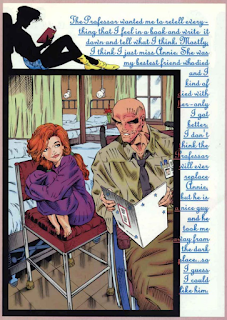 For what it's worth, the wedding is said to be on "the 7th".

The Grim 'n' Gritty 90s
Jubilee refers to Jean as "Miss I'm Too Sexy for a Codename". 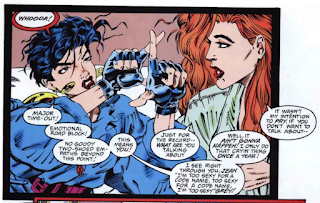 This being 1994, Kitty is making a video album for Scott & Jean. 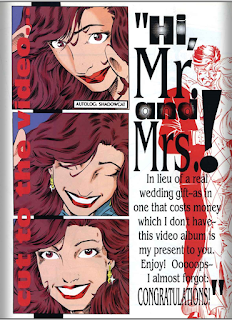 Austin's Analysis
When this was first published, I avoided it, mostly because its larger magazine size meant it would neither fit into one of my plastic comic book sleeves, nor into one of my comic book boxes (because I was that kind of anal-retentive), but also because I assumed it was mostly just a trumped up promotional piece for the upcoming wedding, void of much "in-universe" content. And while the former still holds true, and there is some truth to the latter, upon reading this for the first time for this review, I was surprised to find a fun little Jubilee story alongside the expected Scott/Jean relationship retrospective and a bunch of pinups. Granted, there's not a lot of there "there" to the story, and the layout/design of the "pages from Jean's journal" is pretty terrible, in a uniquely 1994 kind of way (they remind me, not pleasantly, of the "X-Men/Avengers 30th Anniversary" ad pages that ran in the books a few months back), but after their pairing in Uncanny X-Men #303, it was a pleasant surprise to see the strong relationship between Jubilee & Jean established there returned to here and used well, amidst all the other wedding hubbub.

Next Issue
Cable crashes a bachelor party in Uncanny X-Men #310, X-Factor loses one of their own in X-Factor #100, and Wolverine encounters another old foe in Wolverine #79.