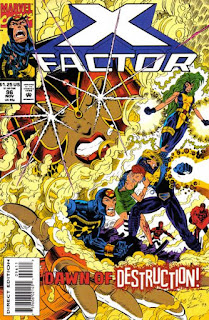 In a Nutshell
The debut of Haven.

Plot
X-Factor responds to a terrorist attack at the Kennedy Center, working through the night to rescue as many people as possible. As they finish, Forge appears, and orders Havok into a meeting. Meanwhile, Random meets with his mysterious employer, but afterwards, is marked for termination. At the Pentagon, Havok lays into Forge, but Forge tells Havok there are lots of questions hanging over their heads, and he needs Havok's help to unravel them. At X-Factor headquarters, Rahne & Lorna share a midnight snack, and Rahne lashes out at Polaris, saying Havok hasn't done enough to help her, but would have if Polaris needed it. Elsewhere, one of Madrox' dupes takes Guido out on the town, while an increasingly-sick Madrox reads a mysterious book. Going for a walk to clear her head, Lorna realizes that Madrox' problems started in Genosha, just as she's attacked by a group of armored soldiers. She holds them off, but before the situation escalates further, the soldiers are teleported away by a mysterious woman who appears before Lorna, telling her to embrace the dawning new age, an age of hope for man, mutant, and the new humanity.

Firsts and Other Notables
Though she only appears behind the scenes in a few panels and then in full on the last page, this issue marks the first appearance of Haven, who will serve as the central antagonist for the story unfolding between this issue and #100. Though she will certainly feel like a big deal in the course of that storyline (DeMatteis will put a lot of work into fleshing out her personal philosophy, and she will have a significant impact on at least two characters), and will get her own trading card in an upcoming collection, ultimately, the character is a minor one in terms of the larger X-narrative, and will only appear a couple more times after the climax of the story in issue #100. 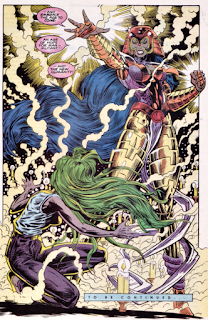 J.M DeMatteis is credited as the sole writer as of this issue, taking over plotting from Scott Lobdell. His run will last through issue #104.

Lorna lights onto the fact that Madrox might be infected with the Legacy Virus, as she realizes his recent misanthropic behavior started before he killed Mellencamp in issue #92 (which is what everyone has been attributing his behavior to), shortly after the team returned from Genosha where he saved the sick Mutate.

This issue opens with X-Factor responding to a terrorist attack at the Kennedy Center, the kind of generic, one-off table setter writers would deploy on occasion (we never learn who is behind the attack, and it's not part of the main plot of the issue, other than to give the characters a chance to show off their powers for any new readers and underline Forge's later point about how "lots of stuff is happening") which reads much differently post-9/11, when we've seen firsthand just how big an impact an even like this has on the fabric of society worldwide. Needless to say, Dr. Doom doesn't show up to shed a tear for the victims of this attack. 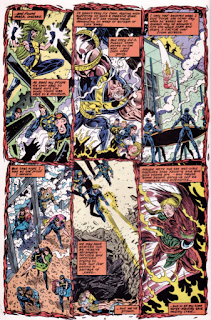 Also, a reference is made to a similar attack on the World Trade Center; not sure if that's meant to be referencing the real-world pre-9/11 World Trade Center bombing, or the Black Tom/Juggernaut attack in X-Force #3-4.

The Chronology Corner
This issue takes place shortly after (or during) "Bloodties", as Havok includes Forge having ordered the team to stay out of Genosha in his list of harangues. It's also a nice, quick, way to establish in-universe why X-Factor didn't get involved in the story. 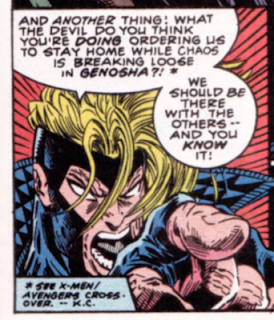 A Work in Progress
It's confirmed here that Random's mysterious government bosses wanted him to test Polaris, and not kill her. 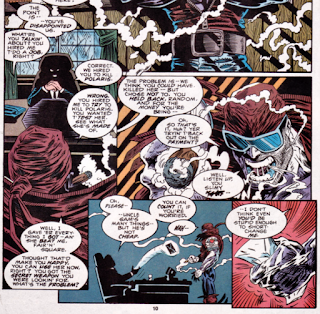 It hasn't been mentioned in awhile (since before Peter David left), but Lorna's weight-loss/body image subplot seemingly gets closed off with a bit of dialogue here, as she says she's learned there's more important things to be obsessed about (which is a rather trite and inaccurate way to end an eating disorder storyline, but it wasn't DeMatteis' story in the first place, and I do appreciate at least a minimal effort to end it, rather than just never referencing it again). 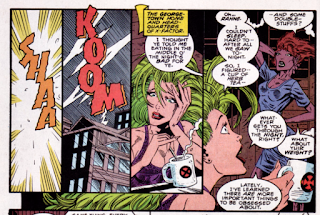 Meanwhile, Rahne is shown to be increasingly unhinged since returning from Muir Island - she savagely lays into Lorna while devouring a hunk of roast beef, and even in the earlier "helping people after the terrorist attack" montage, she's depicted as snarling and foaming at the mouth throughout. 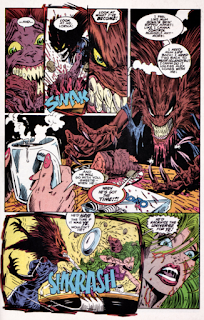 Madrox' dupes are continuing to represent more specific aspects of his personality, with an angry one, a sad one, and one that just wants to have a good time all interacting with Guido, while Madrox himself continues to get sicker. 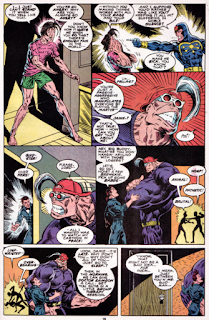 It's in the Mail
One letter in this issue's letter column complains about the scheduling issues of late (specifically issue #93, which referenced events in Uncanny #303, shipping before Uncanny #303). The response cites "production difficulties" as the cause of Uncanny #303's lateness, but also says they are learning from their mistakes working on the late shipping problem "right now".

Another letter complements the book's editorial team for writing an editorial announcing Joe Quesada's departure, instead of saying nothing and letting readers figure out for themselves he was gone for good, noting that it's been ages since the letter writer saw an editorial from anyone at Marvel actually telling readers what is going on in the titles instead of just trying to sell them more comics (that letter did not receive a response). 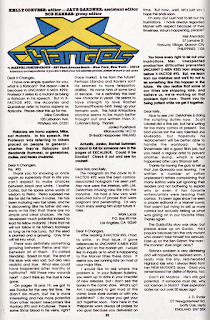 Austin's Analysis
J.M. DeMatteis' run begins in earnest here, as he takes over full writing (plotting & scripting) responsibilities. While one of his pet subjects (New Age mysticism) will shortly be on full display via Haven, the new character he debuts at the close of this issue, for the most part, this is of a piece with the issues immediately preceding it, and one would be forgiven for not noticing the lack of Lobdell as plotter. Once again, the action is fairly limited (most depicted in the opening pages as the team responds to a terrorist attack, along with the attack on Polaris) and the focus, as with David before him, remains on characterization and interpersonal interplay.

Things are getting a bit repetitive - there's another "Havok yells at Forge/Forge undercuts his rage" scene, another "someone attacks Polaris while she's alone" sequence, and we're reminded again about Madrox being morose and Rahne being all torn up by her genetic connection to Havok, but DeMatteis does start to move things forward a bit (perhaps freed from being "only" the scripter) - Polaris finally figures out the real reason Madrox has been so down lately, while Haven will turn out to play a pivotal role in advancing both his and Rahne's storylines. He also does a neat trick by having the same book shown in various' characters possession throughout the issue, and then having Haven quote the book's title when she appears before Polaris. Next issue will make it clear she is the author of the book (and expand on the philosophy behind it), but for now, it's an effective and different way of giving a new character some immediate impact with minimal page-time.