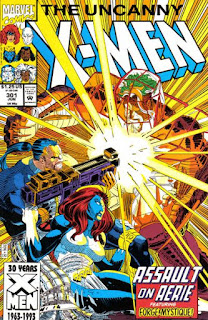 Plot
Fitzroy tortures Selene in order to attract the Gamesmaster's attention and call a meeting of the Upstarts. There, the Gamesmaster reveals their next high profile target will be Forge. At the X-Mansion, Colossus tends to his sick sister, while Moira & Xavier debate sharing their suspicions that Illyana is infected with the Legacy Virus. Xavier says he is bringing someone in to interface with the Shi'ar diagnostic equipment to be sure. Meanwhile, Storm & Bishop are en route to Forge's home in Eagle Plaza when they detect an energy surge in the area. At Eagle Plaza, Fitzroy attacks Forge & Mystique. Forge sends Mystique to call for help, then does his best to fend off Fitzroy. At the X-Mansion, Mystique's call sends the rest of the X-Men racing to respond. At Eagle Plaza, Fitzroy overpowers Forge, but is briefly distracted by Mystique returning in the form of Bishop. But after seeing through the ruse, Fitzroy triggers a massive explosion, just as Storm arrives outside Eagle Plaza.

Firsts and Other Notables
Forge, continuing his mini-return to the series begun in issue #299, is named the next target of the Upstarts, as Gamesmaster rattles off a bunch of stuff about how important he is to the future, none of which every really comes to fruition, because Upstarts. 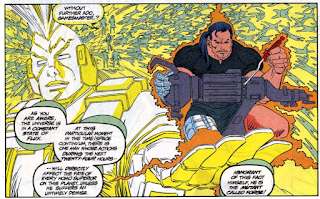 And Mystique is with him as well, as Forge is attempting to help heal her mind (his "official" explanation for leaving the X-Men in issue #290). To that end, he has tasked her with keeping one form for an extended period of time, and Destiny's death in issue #255 is suggested as the culprit behind her issues. Their time together here could also be read as the fulfilment of Destiny's pre-death prediction that Forge & Mystique would end up together (which, at the time, seemed far-fetched, since Mystique was blaming Forge for the "death" of Rogue during "Fall of the Mutants"). 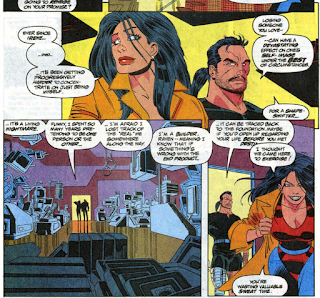 Along with Forge, we get the return of his Aerie, site of several significant X-Men events in the past (including the first appearances of Forge & Mystique, also drawn by John Romita Jr.).

Selene appears briefly in this issue, last seen in issue #283, having been captured off-panel by Fitzroy and tortured to get Gamesmaster's attention. She also reveals that she formed the Upstarts, but like so much else involving the Upstarts, little comes of this; her next appearance will be in a backup story in an Excalibur annual, with her next sustained appearance coming in X-Man. 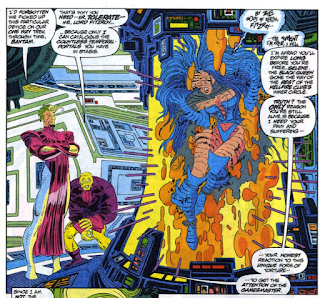 This issue references both Uncanny X-Men Annual #17 (which was published after this issue and I'll be reviewing next week), which features, amongst other things, Mastermind dying of the Legacy virus (which Moira uses as evidence that Illyana is similarly afflicted here) and Colossus being injured such that he can no longer transform back to flesh-and-blood.

Sienna Blaze also appears amongst the Upstarts in this issue, despite her technical first appearance in X-Men Unlimited #1 not being published until after this issue as well (not unlike how Gambit's first appearance is really X-Men Annual #14 but everyone just accepts that its Uncanny X-Men #266)), with the events of that issue referenced as well.

This issue mentions Bishop's sister for the first time, revealing she killed Fitzroy's mother; she will eventually get a name - Shard - and join Bishop in the present (sort of) to serve as one of the many anchors around the neck of post-"Age of Apocalypse" X-Factor. 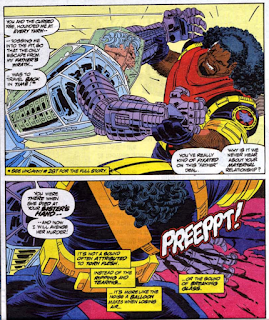 En route to Eagle Plaza, Storm & Bishop discuss Bishop's response to Jubilee asking if he and Storm are dating (with Storm telling him the correct answer is an emphatic "no"), a bit of dialogue that might be directed at the writers of those "when are the two black characters going to start dating?" letters that pop up occasionally in the letter column. 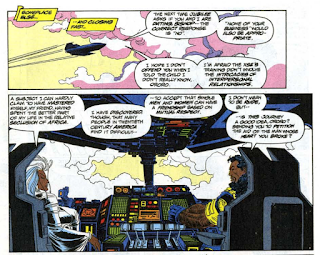 Opal pops up in this issue; apparently Iceman has been bombarding her with flowers since their disastrous last date (in issue #289-290), but he gets called away before they talk about anything significant. 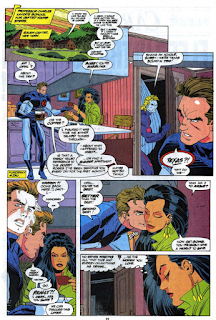 A Work in Progress
It's noted that Fitzroy's toady Bantam is kept around as a means of cataloging Fitzroy's various temporal portals, suggesting once created they stick around in some form.

A bunch of procedural stuff involving the Upstarts is established here: only the current leader of their competition can summon the Gamesmaster , the rest must get his attention, usually through the creation of significant pain, and whomever calls the meeting gets first dibs on whichever target the Gamesmaster declares. 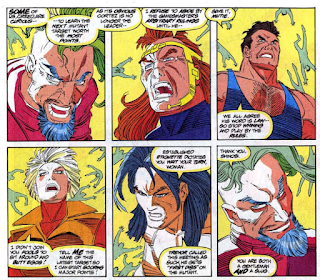 A narrative caption also refers to Gamesmaster as a young man, whereas I've always assumed he was older (probably because he's bald).

Other Upstarts business: the Gamesmaster reveals that the White Queen is not dead, merely in coma, following the events of issues #281-283, as mentioned last issue, Fitzroy's points for killing Magneto are currently in "arbitration,", and  Graydon Creed is shown weight-lifting, with his "quantity not quality" approach to the competition mentioned again despite the fact that we have yet to see him do much. 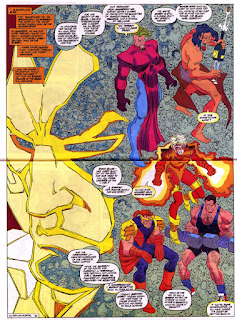 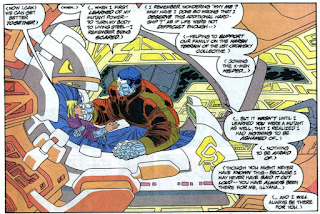 Forge notes that he didn't pass word on to Xavier about the remains of Asteroid M that he investigated in issue #299. 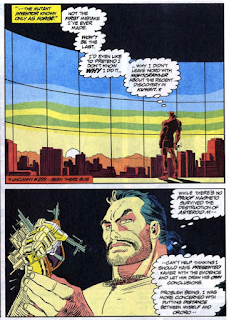 Fitzroy refers to Forge as "Genesis", just as Bishop did in X-Men #8.

Austin's Analysis
Wedged between two big "return of Magneto" issues (and a another notable event in issue #303), the little two-part story that begins here tends to get overshadowed, and it's not hard to see why. Much of it is predicated on Lobdell furthering the dud of an Upstarts story which, in hindsight, turns out to be a minor blip in the history of the X-Men. So as a result, the most interesting stuff in this issue happens on the periphery: Colossus' ongoing issues, the simmering Legacy virus storyline, the check-in with Forge & Mystique. Even a Forge/Storm reunion, and the possibility of addressing their awkward break-up, is held for next issue. Romita Jr. turns in some high-energy, bombastic art (he makes the most out of Armored Fitzroy), and it's especially fun to have him once again drawing Forge fighting back against a more powerful foe in his Eagle Plaza Aerie (and featuring Forge & Mystique in the same spot where he drew their first appearances), but it's otherwise a fairly unremarkable issue.

Next Issue
Next week, the X-Cutioner (no relation to the previous crossover's title) makes his debut in Uncanny X-Men Annual #17.