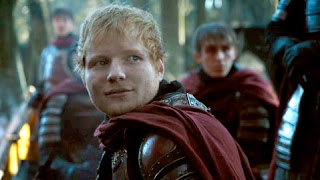 Hey, Game of Thrones is back! I...don't have much to say except that. So, let's get to the review!

The Twins
We start off with Walder Frey addressing his family at a feast. This is a bit odd since Walder died at the end of last season, so I at first I thought this was a flashback. Then he gave a toast with his clan where he obviously poisoned the wine. So, yeah, the Freys die and “Walder” reveals himself\herself to be, of course, Arya.

Later, Arya is wandering towards King's Landing to do some more killing when she comes across some Lannister soldiers. They turn out to be decent folk and even offer Arya some food and wine. I'm not sure what exactly the point of this scene was. Maybe it was to make Arya feel guilty about killing all the Freys when there may have been some good eggs in there or maybe it's to teach Arya to be more careful about indiscriminately Lannisters in the name of revenge or maybe it was an excuse to get Ed Sheeran to sing and appear on screen.

The Wall
Wun Wun lives! Yay! Not sure how he survived, he seemed pretty dead and south of the Wall. But here he is but he's injured. It looks like he's paralyzed. Meera is transporting him on a sled. It's weird. Did I miss something?

Anyway, Eddison Tollet opens the gates and wants to know what's going on. Meera declares that Wun Wun is Bran despite him clearly being of giant blood. Eddison is suspicious and wants to know how he can know Wun Wun is Bran for sure. Wun Wun talks about the White Walkers and how dangerous they are and that non-sequitur is enough for Eddison to let Wun Wun and Meera inside the Wall.

On The Road
The Hound is still hanging out with the Brotherhood without Banners. They come across a cottage that may be from the Hound's past? I'm not sure but I have a bad memory. Maybe Arya and the Hound ended up there? Anyway, it's abandoned save two skeletons.

I think the major point is that the Hound is asked to look into a fire and, despite his reservations, he does. The Hound apparently sees the Wall coming down and the White Walkers marching. Which is close to a vision Wun Wun had. I think this show really wants us to be aware that the White Walkers are coming.

Winterfell
Jon Snow and Sansa are holding court. Jon Snow is talking about all the preparations necessary to fight the White Walkers. He wants the Wildlings to man the Wall, which they agree to. Jon also wants to have women and children fight. Some balk at this concept but Lady Mormont sets them all straight. Keep your gender politics out of this show...about...politics?

The big point of contention was if the houses Karstark and Umber should be forgiven for joining Ramsay. Sansa says no, Jon Snow says yes, since the fathers who did the betrayal are dead. They made it sound like the castles currently occupied by these families are on the front line against the White Walkers. So I say let the traitorous families redeem themselves by being the first to defend against the White Walkers. They'll probably get wiped out and now you save the more loyal families for later in the fight when they, presumably, have a better chance to survive.

Sansa sees Jon sparing the families as an act of kindness and thus thinks of it as weakness because of course she does. And, knowing this show, she'll probably be proved right.

King's Landing
Cersei is lording over the smoldering ashes that was once her capital. She has a map painted on the floor because it's a more dramatic staging scene than just looking at a cloth map on a table. Jaime notes how screwed they are since they are severely weakened, everyone hates them, and they have no allies.

This is Euron Greyjoy's cue to arrive. Jaime is not impressed by the Iron Born but Cersei is pretty much “any port in a storm!” Euron is thinking along the same lines since his marriage plans for Daenerys fell though so he decides to try the same ploy with Cersei.

However, Cersei isn't interested in marriage to Euron. So Euron sets off to prove himself. What he is after is a mystery.

Oldtown
Life at the Citadel is shittier than Sam was expecting. Literally! All Sam wants to do is research White Walkers but instead he has to empty bedpans.

Sam complains to Archmaester Ebrose about no one believing him about the impending White Walker horde. But Archmaester Ebrose is all “I believe you. I just don't care. I'm sure it'll all sort itself out eventually. Bad things happen all the time and we're still here.” This leads to Sam stealing some books and finding out Dragonstone is sitting on a mountain of Dragonglass.

Oh, and Greyscale Jorah is at the Citadel too. He's locked up and quarantined but managed to ask Sam about, who else, Daenerys.

Dragonstone
Daenerys has arrived at Dragonstone (which has been abandoned by Stannis' army, I believe.) She and Tyrion walk up the stairs and through the stronghold, taking in everything there is to see. Yet, they don't speak. I don't know why they don't speak. I mean, it looks like a long walk. I would figure that much walking in silence would get awkward. Are they mad at each other or something?

Daenerys and Tyrion reach a map\council\war room place and finally Daenerys speaks. “Shall we begin?” I suppose they should, but it might require an actual conversation. Hopefully they're up for that!

Other Thoughts
I'll be honest. At first I thought the scene at the Twins was from before Walder's death and that there'd be some weird retcon where Walder killed his family before being killed himself. Yeah, I should've figured out it was Arya sooner.

Speaking of Arya, her-as-Walder specifically not drinking the wine was a bit obvious. You'd think she could've manipulated things so that the wine she drank from was not poisoned.

I'm not saying Sansa can't question Jon Snow or publicly voice opinions, but her and Jon arguing in front of the other houses is a bad look. They should do that in private and show a united front publicly.

Cersei wants to go after the North too? She REALLY likes overextending her resources, doesn't she?

What is Euron going after? The books would suggest it's a horn to control dragons, but maybe it'll be the head of one of Cersei's enemies? What if we just never see him again?

When the Hound, looking into the fire, saw the Wall the fire popped loudly. See, I'm a smart guy that can find symbolism!

Is this the first episode to not cross the Narrow Sea on the opening world map?

This episode was decent but nothing spectacular. Really it was just table setting and reminding us what all the characters were up to after the season break. That's not bad but it doesn't make for a compelling discussion.

Cersei: Unlike the Freys they have ships. And they're good at killing.
Jaime: They're not good at anything.

Sansa: Littlefinger saved us.
Brienne: He wants something.
Sansa: I know exactly what he wants.


Season 5 Totals
Boob Count: 0
Full Frontal Count: 0
Butt Count: 0 (I don't recall any nudity this episode but I think HBO warned me there would be, so maybe I'm forgetting something?)
Coitus Count: 0
Main Character Death Count: 0 (No main character deaths this episode. Well, except for the death of the integrity of this show after pandering to the lowest common denominator with stunt casting Ed Sheeran! I'm just kidding, I didn't give a shit.
Newer Post Older Post Home
Posted by Dr. Bitz at 11:54 PM