The Milch Studies: DEADWOOD Season One - “Suppose the Foot Says…” 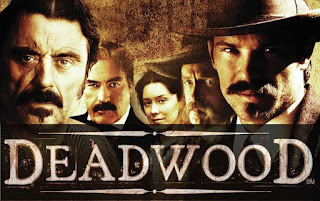 David Milch can quote that passage off the top of his head, and while the verses were a lesson to the early church, Milch uses the mining camp of Deadwood to prove the same point.  Milch’s interest in this philosophy apparently comes from his friendship with a Catholic priest who viewed himself as a Paulist, and was the inspiration for Milch’s original pitch for a show set in ancient Rome.  Milch has recounted that they discussed their “Paul series” on the man’s deathbed, with Milch promising that one day the show would be made.

The Paulist point of view on Deadwood is presented by Reverend Smith, a character based on the actual chaplain of the camp, a man with no interest in gold but a calling to witness to the prospectors.  Smith also suffers from a brain tumor, and becomes increasingly unbalanced as the episodes progress.  Interestingly, Milch has his own perspective spoken by a mentally damaged man, viewed by many as a pest; this might've been a private joke on his part, or just a way to work in the theme without having the message come across as a pious sermon.  Aside from establishing the series’ overall theme, the Reverend Smith arc from Season One is absolutely heartbreaking.  The dynamic between Reverend Smith and Al Swearengen is fascinating, with Swearengen offering an unexpected kindness to the feeble pastor, who suffers from the same seizures that afflicted his younger brother. 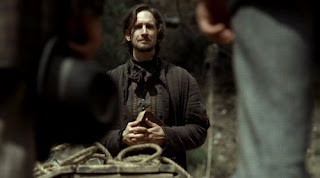 I’m not sure if Deadwood is exactly the show Milch’s friend thought he was getting, but the show does express certain views on God, community, and man’s obligations towards his fellow man.  Philosophy is just as important to the show as character development, with each arc addressing issues of identity, loyalty, the birth of a community, and how exactly civilization can be created out of chaos.

It’s also the most vulgar show in the history of American television, a series so profane, even HBO had qualms about the use of language.

Ow, My Freakin’ Ears!
When I first heard about the controversy surrounding the liberal doses of vulgarity on the series, I assumed it was a case of Milch just expanding what he’d already done with NYPD Blue -- merging the highbrow and the lowbrow, roping the audience in with smut but also providing them with something to think about.  I also questioned if Milch was simply mocking what the audience expects from a pay-cable drama; essentially saying, “If you want a vulgar HBO series, look at what I can do!”  Turns out, I was very wrong.

I’ve heard two justifications for the use of profanity on this series, which drops F and C-bombs in a way that makes Quentin Tarantino movies seem modest.  When the show originally aired, I recall producers stating the characters had to use modern profanity in order to emphasize just how savage the town of Deadwood actually was.  While a religious swear of “damn” or “hell” would likely go unnoticed today, in the 1800s, this talk was scandalous.

Over the years, however, David Milch doesn’t seem to have bothered with that argument.  He contends the use of profanity on the show is historically accurate, based on his study of primary documents of the time.  In more than one interview, Milch defended the use of profanity, using the arguments seen in this New York Magazine article.

As for why the characters swear so much, Milch compares the vocabulary to a primate grunting and threatening another primate.  His premise is that in this lawless town, everyone had to jealously protect his belongings and keep strangers at a distance.  Salting every sentence with profanity is a way of saying “We’re not friends and you ain’t touchin’ my s---” with each breath.  (Although that doesn’t explain why friends and allies consistently use this language amongst themselves…)

The issues with profanity go back to the earliest development of the series, when Milch actually wrote a paper citing his historical research and presented it to HBO executives in order justify his belief that, yes, people did talk this way.  And yet…Milch never felt entirely restricted by established history, and the use of profanity does have at least a few historical inaccuracies.  The use of “mother----er” for example, seems to have a specific meaning attached to American soldiers in World War II.  (If you look up the theory, you’ll see just why a “mother----er” should be considered the lowest of the low.  Some doubt has been placed on this story, but it's generally accepted that various uses of "f---" as an adjective or intensifier didn't begin until around WWII.)  Another insult on the show, this one oddly quaint, is the occasional use of the old slang “hooplehead.”  It’s a term for a backwoods rube, but apparently its origin can be traced to an early twentieth century radio program, not the 1800s.  Supposedly, Milch just liked the sound of it. 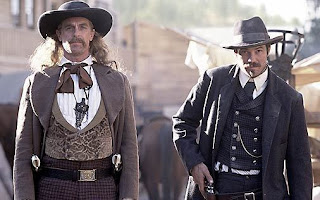 That Ain’t Right
None of these examples below should be considered a criticism of the series; and I certainly don’t claim to be a historian.  The only reason why I bothered to read up on these figures is because I liked Deadwood so much in the first place.  It is interesting to see where Milch diverged from real history, however, so I’ve compiled a few examples.
·        Most historians seem to agree that Seth Bullock and Wild Bill Hickok never met, with Bullock arriving in the camp either the same day Bill was killed, or a few days after Bill’s death.  Milch believes they did cross paths, and possibly became friends, based on the writings of Seth Bullock’s nephew.
·        The real Calamity Jane was apparently much closer to her Deadwood interpretation than other Hollywood portrayals, which tend to sanitize the character.  I don’t believe Milch ever acknowledged that Jane was a prostitute, however, even though he was more than willing to dramatize her other flaws.
·        The timeline of the first season is around three weeks, if that.  (Going back to NYPD Blue, Milch has a tendency to set one episode just one day after another, and with the exception of the break between Wild Bill’s death and funeral, he sticks to that habit here.)  While Seth Bullock did start off as a hardware store owner before becoming sheriff, several months passed before he accepted the role.  On the show, it’s a few weeks.
·        In reality, Reverend Smith was killed by Indians (or perhaps miners who just didn't like him) while traveling outside of the Deadwood camp.  The brain tumor is an invention of Milch’s.  In a letter written after Reverend Smith’s death, Seth Bullock also indicated that he only knew of Smith by reputation, while on the series, they’re friends.  (One of the most touching moments of the series is when a delirious Reverend Smith asks Seth and Sol if they are in fact his friends, or as his mind now tells him, demons in disguise.  Their response is beautifully written and performed.)
·        In the series, Seth Bullock has married his brother’s widow and adopted their son out of obligation.  In real life, Seth married his childhood sweetheart and had a daughter.  I can also state with certainty that he never had an affair with Alma Garret, because Alma is entirely a Milch creation and not a real person.
·        Al Swearengen was actually married when he opened The Gem, a fact not acknowledged on the series.  Swearengen’s connection to England, referenced in the opening episode, is also an invention of the show.  Initially, the character of Ellsworth was supposed to refer to himself as a descendant of “those limey ----suckers”, but actor Jim Beaver suggested giving that line to Ian McShane instead, as cover for the actor’s British accent.  Milch agreed, even though I don’t think McShane sounds particularly British on the show.
·        The real Charlie Utter and the character on Deadwood were both close friends with Wild Bill, but the similarities nearly end there.  In real life, Charlie Utter was famous for his flowing blond locks, and was viewed as needlessly fastidious about his grooming and appearance.  (He actually took a daily bath!)  According to legend, Utter refused to allow anyone, even Wild Bill, into his tent at night for fear his expensive blankets and grooming products might be stolen.  Utter was also one of the very first explorers to appear in Deadwood, thanks to his connection to General Custer, but I don’t recall this ever coming up on the show. 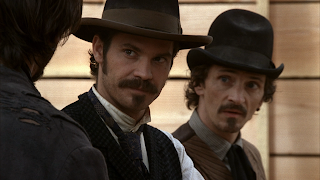 “The Process”
Even though Deadwood is obviously a Milch creation, he only has a handful of official writing credits during the show’s three-season run.  A behind-the-scenes feature on the show revealed the production process, which had Milch and a team of writers kicking around ideas for the episode to be shot the next day in a trailer on the set.  At least some form of skeleton for the episode was finished, and then Milch would stay on the set for the entire shooting schedule, writing much of the dialogue -- dictating, actually, since he doesn’t physically write things down -- and feeding it to the actors.  (Ian McShane has been quoted as saying the scripts he received on set where still “hot from the ----ing copier.”)  I’m assuming some union regulations prevented Milch from receiving official writing credit for working this way, although I’m not sure how it was decided who actually did receive the eventual credits.  Then again, Milch’s method for producing NYPD Blue was reportedly much the same, and he ended up with story credits on almost all of his episodes there.

Interestingly, a few of the actors on Deadwood ended up with writing credits.  Character actor Ricky Jay, who played Cy’s subordinate Eddie, is the credited writer for a late Season One episode…which turned out to be one of his final episodes before leaving the show.  (Perhaps the only abrupt departure of an actor from this series.  While actors drop out of Blue on a regular basis, Deadwood keeps almost its entire cast intact for its run.)

Milch’s technique for producing this show has become legendary, with some actors showing up not entirely certain what role they would be playing, and Milch having lengthy, intense conversations with them right before their scenes, explaining their character’s state of mind and subconscious psychological motivations.  Some of the actors have acknowledged they really didn’t understand much of what he was talking about, but they trusted Milch’s process.  Jim Beaver, who’s worked with Milch on many shows, says that on their next series, John from Cincinnati, members of the cast were much more resistant to working this way.  This AV Club interview with actor Stephen Tobolowsky offers some insight into what it's like to work with Milch...rehearsing scenes for hours that Milch casually tells you they're actually not going to shoot, or giving you directions to act in a scene "as if you were a bird."  Sounds like fun. 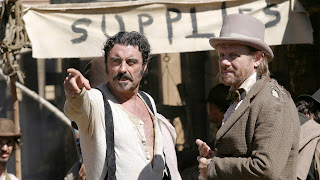 Next Time -- Will I finally finish NYPD Blue?