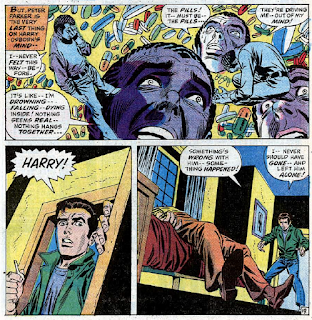 As you may or may not know, Doctor Bitz and I are two of the co-hosts of "A Very Special Episode", a podcast which reviews "very special" episodes of pop culture - those stories where the usual rhythm or tone of an ongoing narrative is briefly interrupted to discuss a serious, topical or otherwise atonal issue, usually with little advance warning or subsequent follow-up. Most often, we review TV episodes, like the infamous child molester episode of Diff'rent Strokes or the episode of Family Ties where Alex Keaton grapples with the death of his previously-unmentioned best friend by turning the show into a one-act play.

But in our recent episode, we branched out  to review a very special comic book story for the first time, specifically the Comics Code-less anti-drug story in Amazing Spider-Man #96-98. Given that a lot of the regular readers of this site read, you know, comic books, and/or are generally fans of Spider-Man, I figured I'd give the episode a special plug here. Plus, Doctor Bitz and I (along with one of our other co-hosts, Full House Reviewed's Ryan Alexander-Tanner) are joined for the episode by the writer of the Chasing Amazing blog, Mark Ginocchio, who also recently wrote the book on Spider-Man, 100 Things Spider-Man Fans Should Know and Do Before They Die.

So while you're waiting in line for Spider-Man: Homecoming this weekend, give it a listen, and if you like what you hear, check out some of our other episodes (and if you want to buy Mark's book, too, I won't stop you...).

The link below will enable you to listen to and/or download the episode directly, but you can also listen via iTunes, Google Play, Podbean or Stitcher, with links to all four on the show's main website linked to above.