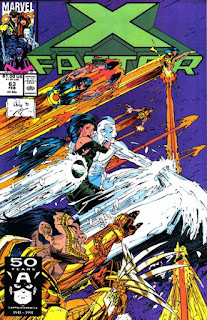 In a Nutshell
Iceman and Marvel Girl go to Japan to rescue a captive Opal.

Plot
While out on a date, Opal and Bobby are attacked by a group of Japanese men with cybernetic implants, who were sent by their master to retrieve Opal. They toss a surprised Bobby out the window of the high rise restaurant as Opal fights back, but she only manages to tear away one of their insignia. The cyber warriors' leader, Hiro, tells Opal they're taking her back to her grandfather, then they all teleport away. Outside, Bobby ices up and returns to the restaurant, picking up the insignia left behind. He takes it to Opal's parents, who recognize it as the insignia of the Tatsu clan, and explain that they adopted Opal as a way to free her from her grandfather, though they were unable to save her birth mother. In Japan, Opal's grandfather Tatsu'o tells her she is to marry one of his cybernetic warriors and provide him with an heir, and Opal meets her birth mother. Back in New York, Bobby prepares to head to Japan, insisting on going alone but ultimately acquiescing to Jean accompanying him. 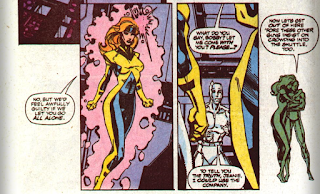 In Japan, Bobby and Jean meet with Mariko, as Opal vows to play the part of the submissive granddaughter until she can find a way to escape. At the Yashida home, Mariko tells Bobby of an upcoming sumo match, declaring it will be the best chance to rescue Opal, but insisting her ninjas carry out the attack and rescue, so as to prevent an international incident. Bobby reluctantly agrees. At the match, Mariko, Bobby and Jean arrive as spectators, waiting for the ninjas to get into place. But Opal, hoping to attract the attention of the crowd, suddenly shouts out that she's been kidnapped. When Tatsu'o strikes her, Bobby leaps into action and a fight breaks out between him, the ninjas and Tatsu's cyberpunks, which ends when the cyberpunks teleport away with Tatsu'o and Opal. Mariko is furious that Bobby didn't stick to the plan, but he tells her it never would have worked, since Tatsu'o could have teleported away at any moment. He declares that now they're doing things his way, that he'll storm Tatsu'o's stronghold and bring Opal out himself, or die trying.

Firsts and Other Notables
Whilce Portacio joins the book as the new regular artist, the final future Image co-founder to work on an X-book and, given that both Jon Bogdanove and Paul Smith were only on the book for, essentially, a storyline a piece, the first regular penciler the series has seen since Walt Simonson left after issue #39 (even better, Al Milgrom is finally no longer inking whomever is drawing the book). Portacio also gets co-plotting credit alongside Simonson.

New artist, new costumes: X-Factor gets new uniforms this issue, now featuring a uniformed blue/yellow look. Of course, as with the previous costumes, it's pretty much just Scott & Jean sporting them, save for the few times Iceman is running around sans ice. This also marks the first time that Cyclops is wearing a costume without a skullcap, thus exposing his hair. 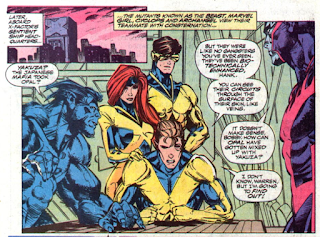 Ship is seen to be experiencing some malfunctions, a setup that will be followed up on in the next story.

In Japan, Bobby and Jean meet get assistance from Mariko, making this the first time Jean and Mariko have met (with both women thinking to themselves about how they can understand Wolverine's attraction for the other). Bobby and Mariko, meanwhile, act like old friends, but I can't honestly think of a time that they've ever interacted on-panel, nor really any reason they'd have had to interact behind-the-scenes at any point.

This issue reveals that Opal is actually adopted (with the corresponding papers the thing she received in issue #59 which so freaked her out) and is the granddaughter of a Japanese crimelord who employs a series of cybernetically-enhanced ninja warriors, all of whom appear here for the first time (they'll make one more appearance in a later Uncanny X-Men story, but that's about it for them). 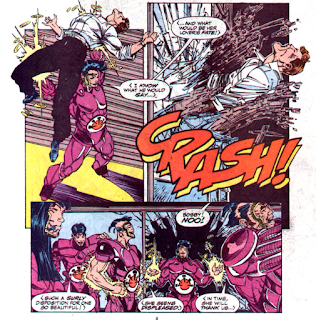 A Work in Progress
Hiro, the totally-subtly named leader of the Cyber Warriors, is impressed by Iceman's honor, in that he doesn't kill his foes. 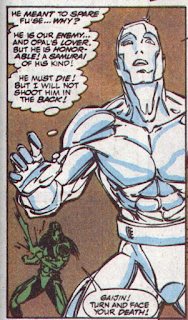 During the attack on Tatsu'o, several of Mariko's ninjas shout taunts and braggadocio at the Cyberpunks, which seems, you know, contrary to the whole "silent killer" thing ninjas are supposed to do. 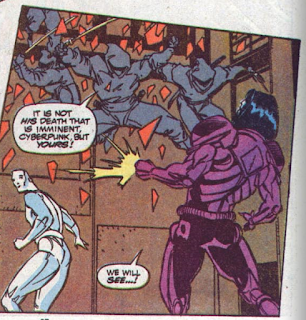 Also, this issue was published at a time when someone thought it was still necessary to explain to readers what the Yakuza are. 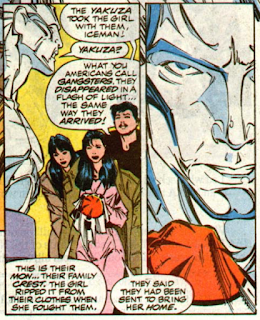 Teebore's Take
Taken on its own merits, there's plenty to like about this issue: the arrival of Portacio provides the series with a regular artist for the first time in ages; Simonson's development of the book's supporting cast doesn't abate in the wake of "X-Tinction Agenda" and the arrival of Portacio, with Opal featured front and center; along with Opal, Iceman is given a rare opportunity to headline a story, and pairing him with Jean makes for a fun and rare (if rather arbitrary for this story) combination. Yet at the same time, it's hard not to read this issue in relation to the respective issues of Uncanny X-Men and New Mutants on sale at the same time. New Mutants #98 features Liefeld unleashed, for better and worse, for the first time and the introduction of what will become a significant new character. X-Men #273 features an assortment of top artists and stands as a representation of a franchise at a crossroads. Compared to that "cyberpunk ninjas" pale in comparison (not that they were shining too brightly anyway), and for all this issue's relative merits, they simply don't stand up in the face of what the other titles are doing at the same time. X-Factor will yet have its standout moments before the line gets reshuffled, but it's still a shame that it comes up so short out of the "X-Tinctiona Agenda" gate in comparison to its fellow series.