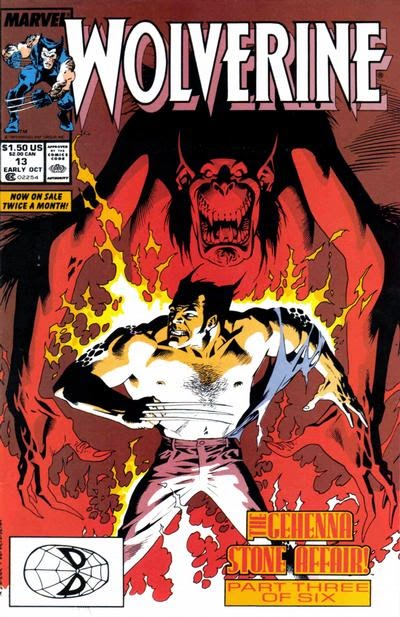 In a Nutshell
The origin of the Gehenna Stone is revealed.

Plot
In Madripoor, twin brothers enter the Princess Bar carrying a stone they claim they're going to make a lot of money selling. In San Fransisco, Wolverine helps Archie evade the police as Burt agrees to tell everyone about the Gehenna Stone. In Madripoor, the two brothers rent a room from O'Donnell. In San Fransisco, Archie tells the history of the Gehenna stone, which is the repository of the soul of a demonic being named Ba'al who, in Biblical times, was slain outside Jerusalem by a warrior named the Hand of God. The warrior smashed the stone into fragments and scattered them, never to be reassembled. However, over the last few year, archaeologists have begun unearthing the stone fragments, after which the fragments started to disappear. 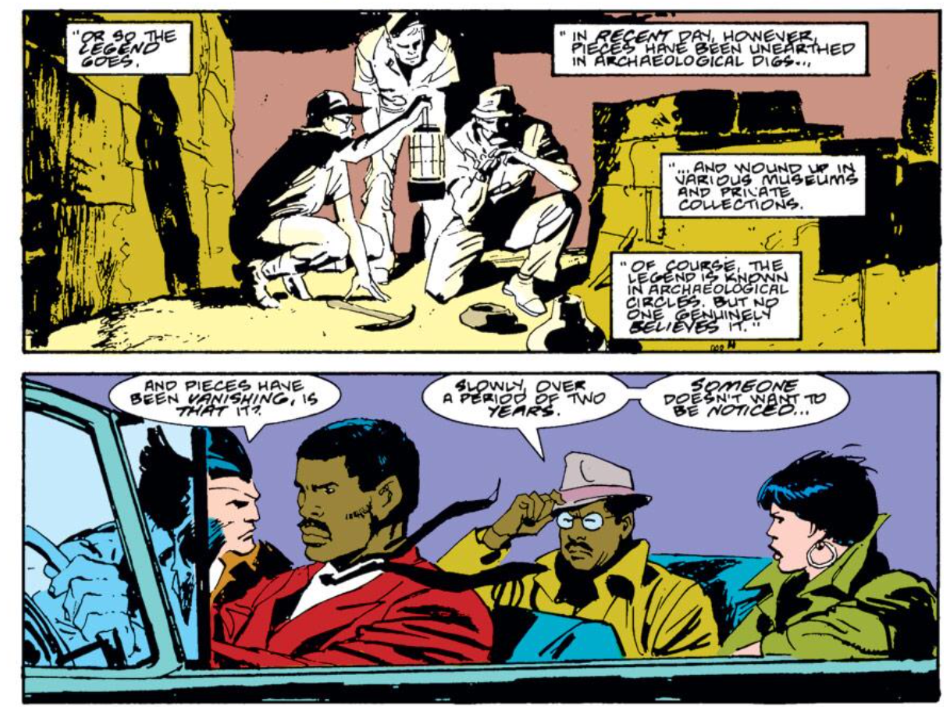 In Madripoor, the two brothers fight over their stone. In California, Wolverine and company reach the small airfield where Archie left his plane, but Ba'al and his followers are waiting. In Madripoor, the two brothers kill each other. At the airfield, the Followers of Ba'al attack, and Ba'al himself targets Wolverine. The two battle to a draw, leaving Wolverine to wonder how Ba'al knew they'd be coming to the airfield. In Madripoor, O'Donnell discovers the dead brothers, the stone lying in a pool of blood between them.

Firsts and Other Notables
This issue reveals the history of the Gehenna Stone, a repository of Ba'al's power from Biblical times. 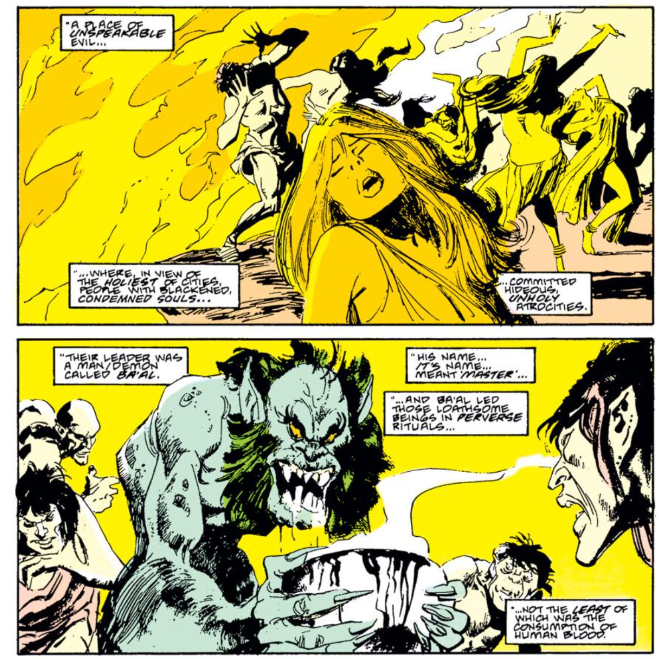 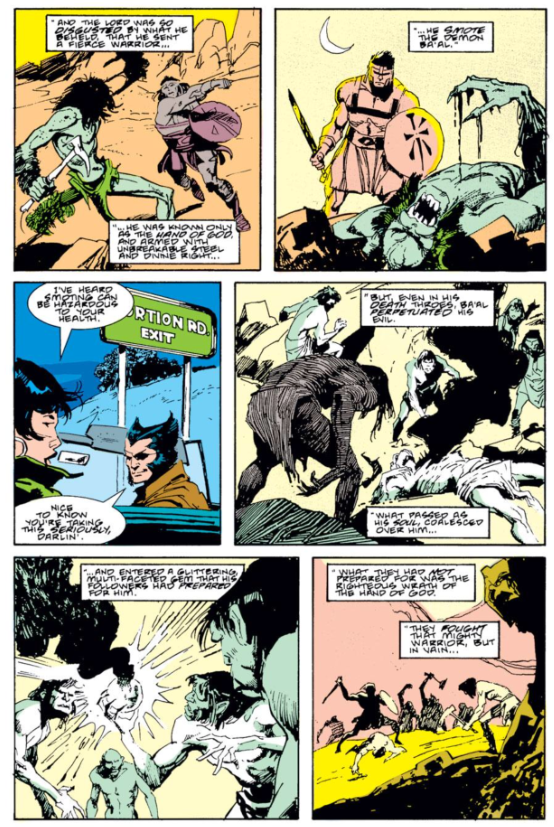 We also get a good look at the Followers of Ba'al's leader (who first appeared in shadows last issue), who claims to be the reincarnation of Ba'al, complete with fangs. 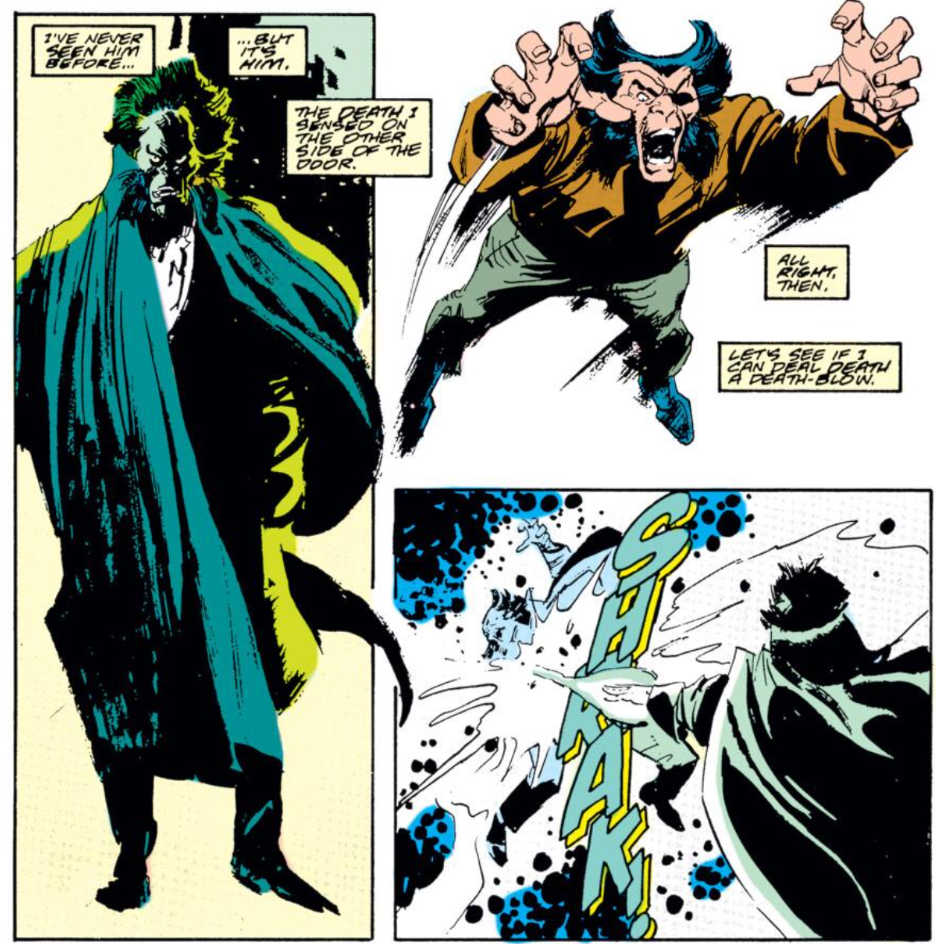 A Work in Progress
Burt reveals that he was able to acquire his piece of the Gehenna Stone by becoming a member of the museum's Board of Directors, then making the swap for the fake stone. 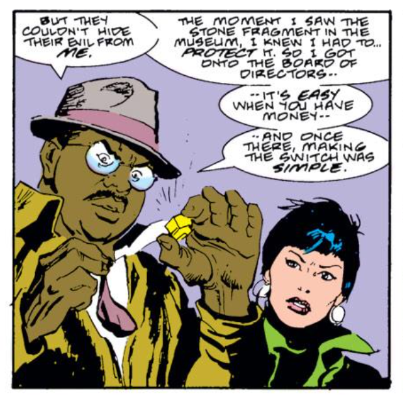 Wolverine pretty much says "eff it" about not using his claws this issue. 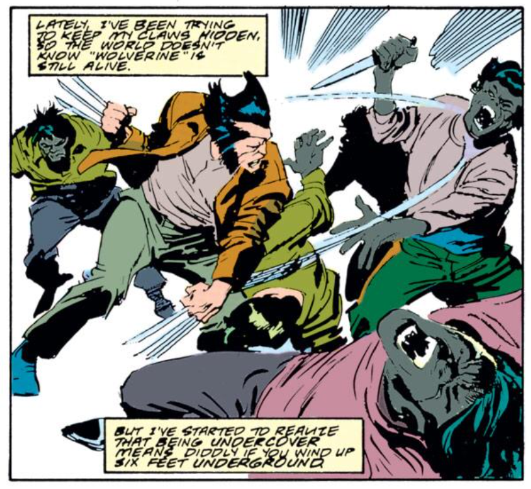 The Best There is at What He Does
Ba'al is unable to tear Wolverine apart because, you know, the adamantium bones.

Teebore's Take
Doing the heavy lifting that probably should have occurred last issue, this one finally lays out the story of the Gehenna Stone, gives us a proper introduction to the central villain of the piece, and adds an additional wrinkle to the mix: people carrying a fragment of the stone become increasingly possessive of it, while those in its vicinity become extremely covetous of it, to the point of murder. That's a lot of development for one issue, and given that this story runs six, it probably would have been better to slot some of it into the previous issue and cut back on that car chases a bit. 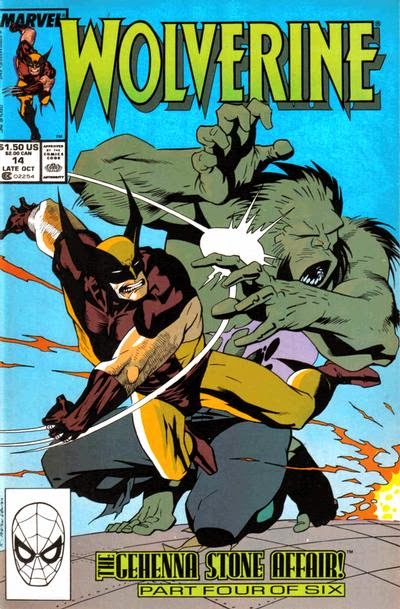 In a Nutshell
Wolverine dons his superhero costume while fighting Ba'al.

Plot
Wolverine and company are flying back to Madripoor, but they are pursued by another plane carrying Ba'al and his followers. In Madripoor, O'Donnell refuses to hand over the stone he took from the dead brothers to Captain Tai, but when he shows it to the officer, Lindsay becomes entranced by it as well. Over the pacific, the Followers of Ba'al attack Archie's plane, prompting Jessica to leap out onto their plane just as Wolverine emerges, wearing his X-Men costume. He follows after Jessica, and the pair fight their way inside. Burt drops a rope ladder to help them get back aboard Archie's plane, but some of the Followers use it instead. In Madripoor, Lindsay comes to O'Donnell's room, asking to see the stone, and the pair embrace. 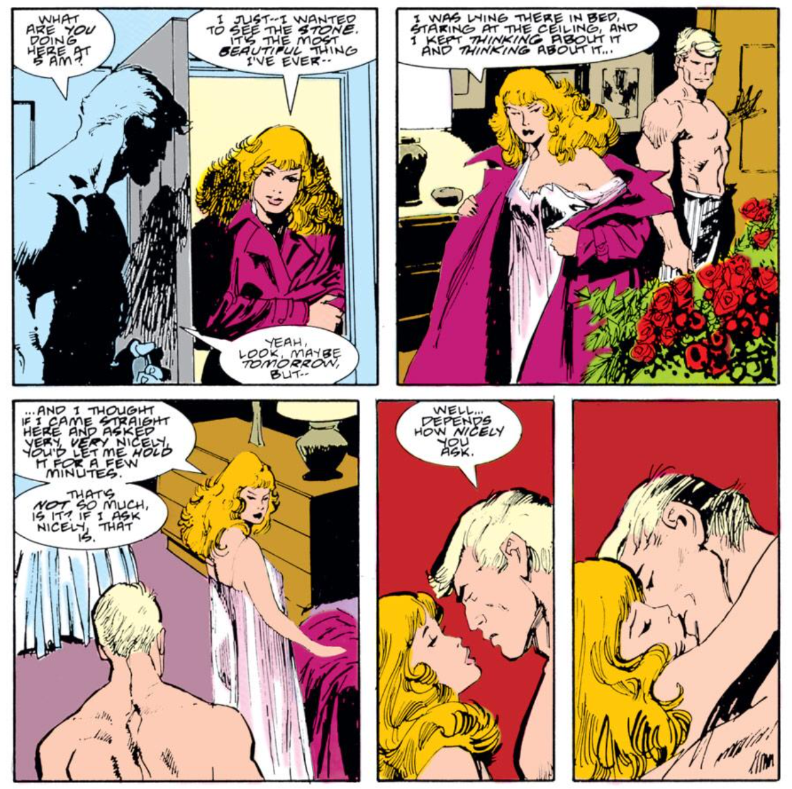 Meanwhile, Wolverine battles one of the Followers transformed by Ba'al into a monstrous creature while Burt fights off the Followers trying to board the plane. Wolverine manages to electrocute the monster, damaging the plane in the process, but helps Jessica rather than confronting Ba'al. The pair manage to grab hold of Archie's ladder just as Ba'al's plane explodes, while in Madripoor, O'Donnell and Lindsay are interrupted by an aide to the prince leading a group of gun-toting men, saying the prince wants what O'Donnell has.

Firsts and Other Notables
Wolverine appears wearing his superhero costume for the first time in the series (though it's unclear why he felt compelled to wear that costume and not his Patch one) in this issue. 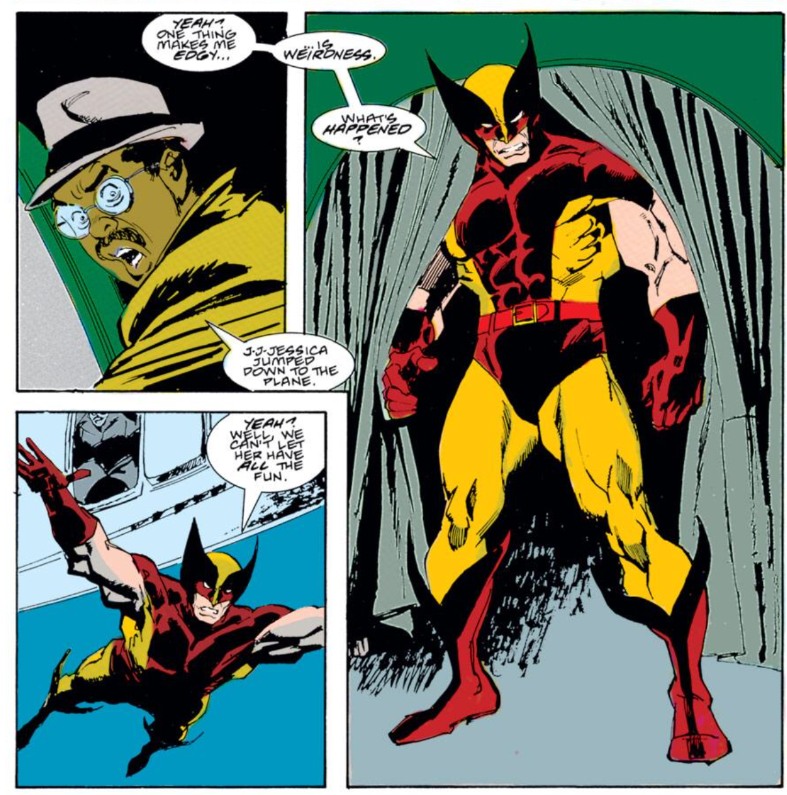 Jessica also finally reveals that she's known Patch was Wolverine all along. It's interesting that both that and the first appearance of Wolverine's costume came via Peter David, who is essentially a guest writer on the series at this point. Presumably, had Claremont stayed on the book, he wouldn't have necessarily gone down this road quite so soon, which makes one wonder if editorial wanted Wolverine back in his usual look, and just made David, who, as a guest writer, would have been less likely to fight them about it, do it. A Work in Progress
It's established that Jessica is officially working for the prince to keep an eye on certain people for him, especially Wolverine. 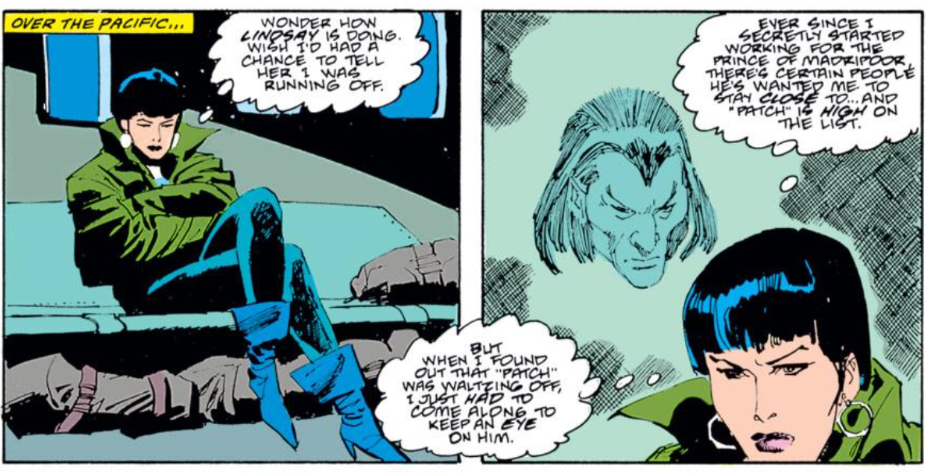 The Best There is at What He Does
Wolverine is able to brush off being shot at close range from two different machine guns. 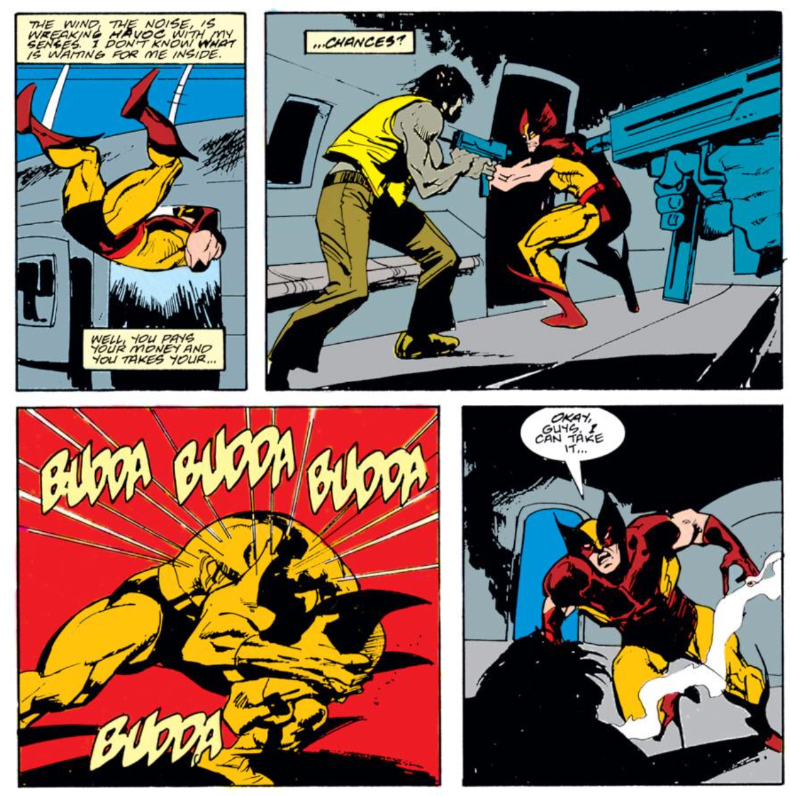 Young Love
O'Donnell and Lindsay hookup this issue, as Lindsay, in the thrall of the Gehenna Stone fragment, basically says "I'll sex you up if I can see the stone". 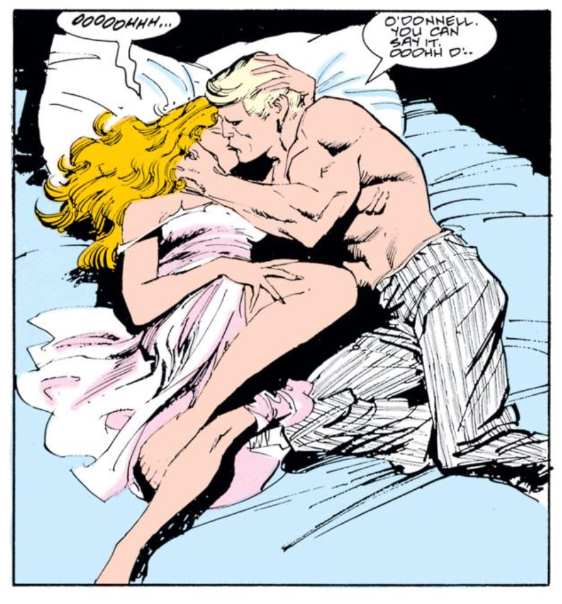 Teebore's Take
Easily the best chapter of the story yet, this issue finally puts to rest the whole Patch ruse (or, at least, begins the work of putting it to rest), showing Wolverine in his X-Men costume in this series for the first time and wisely revealing that Jessica Drew, at least, is not an idiot and knew Patch was Wolverine all along (of course, this still means Wolverine is something of an idiot for thinking his "ruse" could fool anyone, let alone a friend who's a detective for a living). Beyond that, we also get a pretty nifty (and, admittedly, fairly ridiculous and physics-defying, but in a fun comic book way) mid-air action sequence with dueling planes that puts the car chase to shame. That, combined with the tease of the prince's increasing involvement, does a lot to inject some energy into the story just when it needs it.