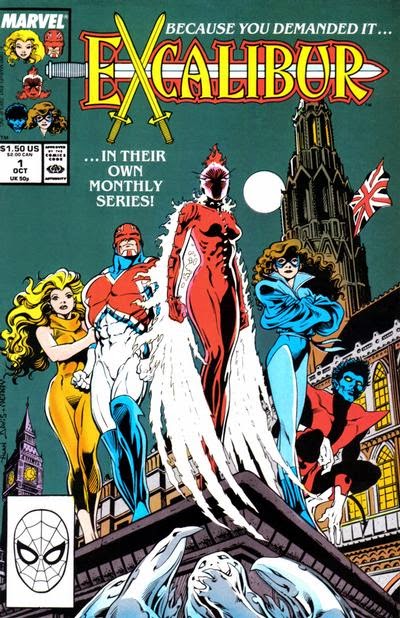 In a Nutshell
The newly formed Excalibur tries to track down the Warwolves.

Plot
At Loch Daemon, Crazy Gang member Tweedledope tries to build a robot but gives up, walking away before the small metal head opens its eyes. In London, Captain Britain, Shadowcat and Phoenix help the police with a hostage situation at a nightclub. As Shadowcat and Phoenix enter the bank, one of the Warwolves attacks an inspector, killing him and taking his form. Inside the bank, Phoenix is knocked out by the telepathic death cry of the inspector, and Shadowcat is forced to try and take out the hostage-takers herself. Later, the Warwolves kill again, and Rachel once more feels the death. A few days later, Kitty is working on a device to try and help the problem while Nightcrawler and Meggan prepare Captain Britain's lighthouse to serve as Excalibur's headquarters. 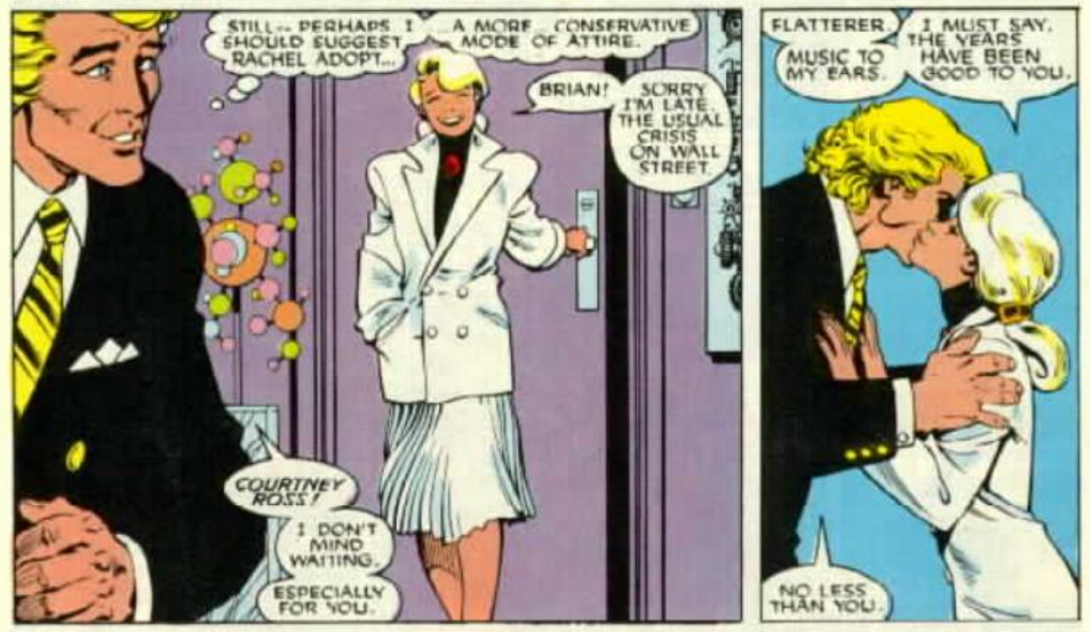 The next day, Rachel and Captain Britain, as Brian Braddock, visit Fraser's Bank. As Rachel is harassed by Nigel Frobisher, a banker who was one of the hostages Rachel helped rescue, Brian meets with one of the bank's VPs, his ex-girlfriend Courtney Ross, telling her he has need of her bank. Meanwhile, Kitty completes the device she has been working on: a module which replicates Rachel's energy signature. Dressing up as Phoenix, she wanders the streets, hoping to draw out the Warwolves. Nightcrawler, however, discovers her plan, and alerts the rest of Excalibur just as Kitty attracts the attention of the Warwolves. They're able to nullify her phasing ability, and though the rest of Excalibur intervenes, the Warwolves escape with Kitty, believing her to be Rachel. Enraged, Excalibur vows to rescue her.

Firsts and Other Notables
Excalibur marks the third X-Men spinoff, continuing the X-books development into a full-fledged franchise, and the second such title launched by Claremont. The series is printed on higher quality paper than most of Marvel's series at the time, without ads and with a pin-up or other piece of art on the back cover (this issue, it's a Phoenix pin-up). As such, it is priced higher than a normal book.

The cover declares we demanded this series, though I suspect that's mostly marketing hype, as the idea of an additional series reuniting the distaff X-Men Claremont wrote out after "Mutant Massacre" and serving as a vehicle for the writer's sense of whimsy seems like something that was in the works long before anyone could have been demanding it.

Widget, who appeared on the back cover of Excalibur: Special Edition #1, appears for the first time in the story, cobbled together by Crazy Gang member Tweedledope. Widget will eventually join the team, and be revealed to be an iteration of Shadowcat from the future.

Nigel Frobisher also appears for the first time this issue; he will become a recurring character/gag in the series. 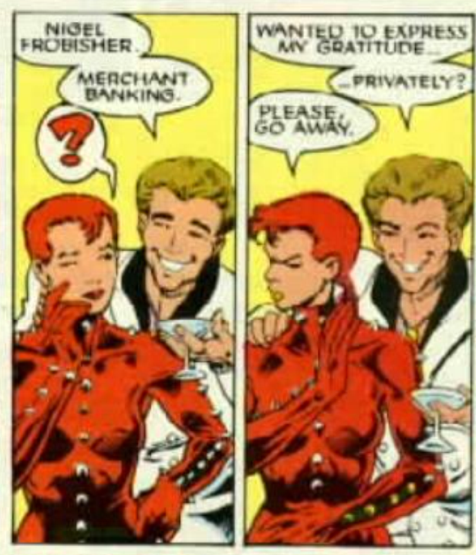 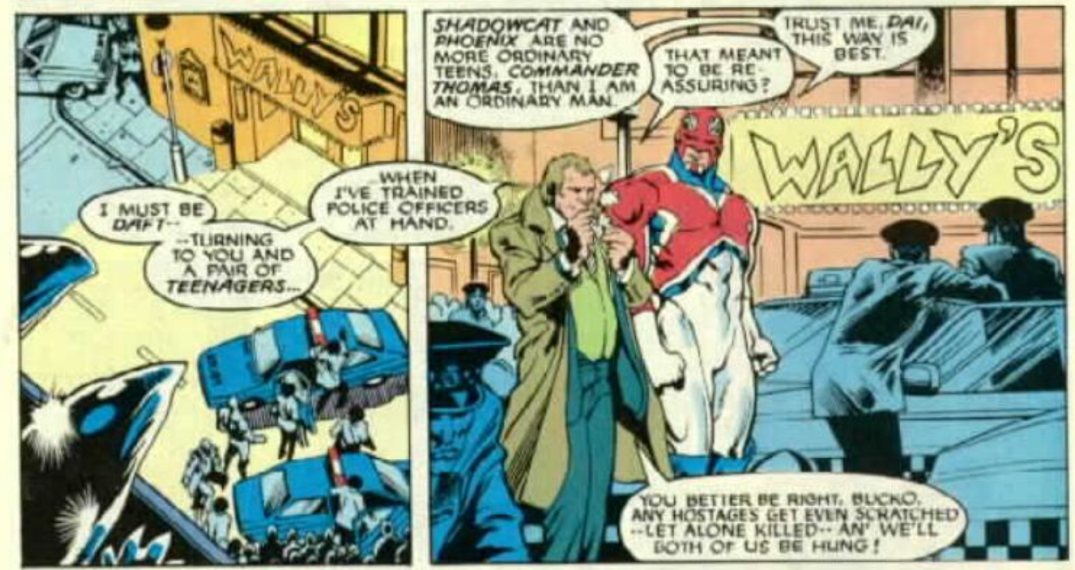 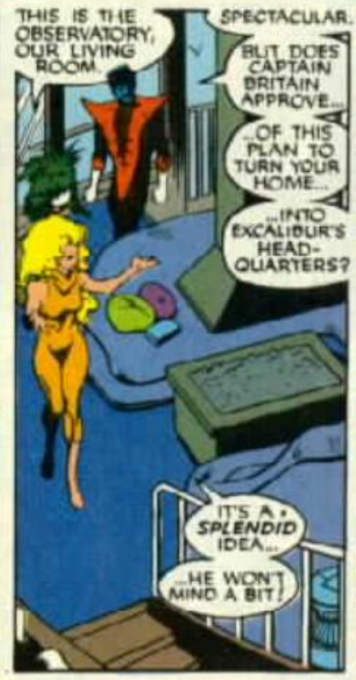 In doing so, Nightcrawler seeming stumbles into an alternate dimension, a subplot that will linger for some time. 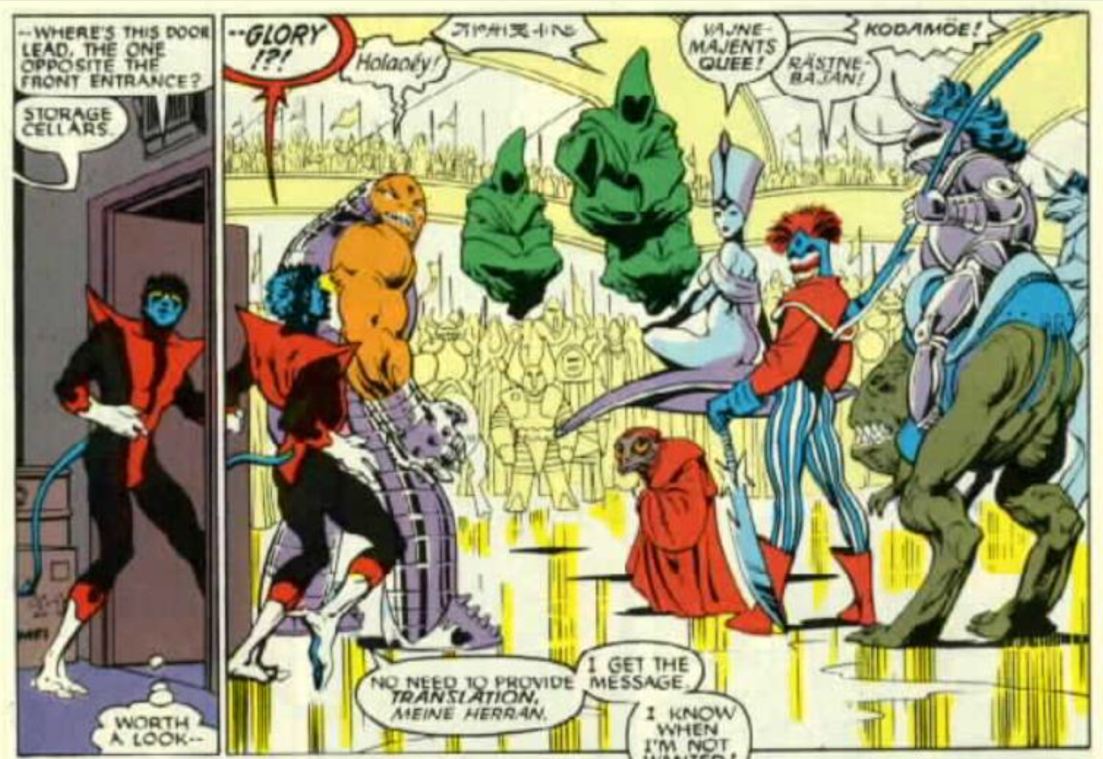 Terry Kavanagh (whose actually been serving as an assistant editor in the X-office for awhile now) gets his first editorial credit; he'll edit much of Excalibur, and eventually write some truly wretched stories for the X-office in the 90s.

As I've mentioned before, I've never actually read Excalibur prior to issue #71 (the "Fatal Attractions" tie-in), so my write-ups of this series may differ a bit from those of X-Men, New Mutants, and X-Factor (all of which I've read copiously before), in that I don't know exactly what's coming issue-to-issue (though I am aware of some of the broad strokes), and thus may fail to point out things that become important later on and/or be forced to rely on outside sources more often than usual.

A Work in Progress
Kitty recalls both the seeming death of the X-Men, as well as Doug Ramsey's recent death, prompting a pretty cool montage of X-Men villains drawn by Alan Davis. 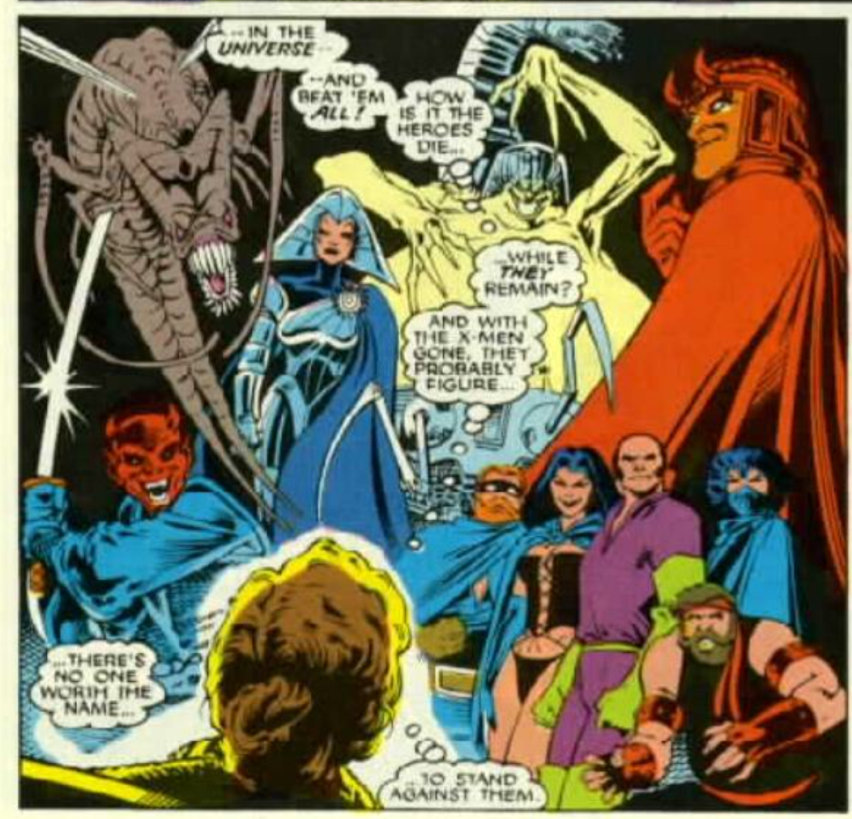 It's established that the strain of staying solid (rather than phased) causes Kitty to have headaches. 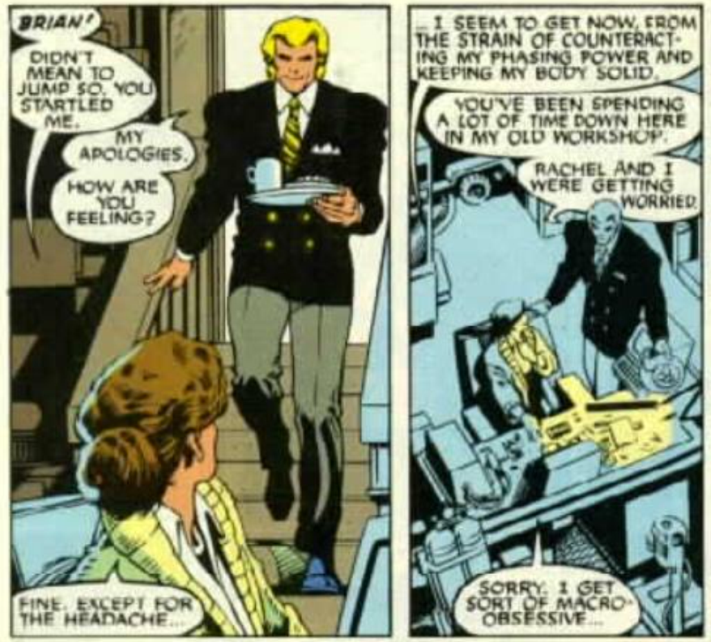 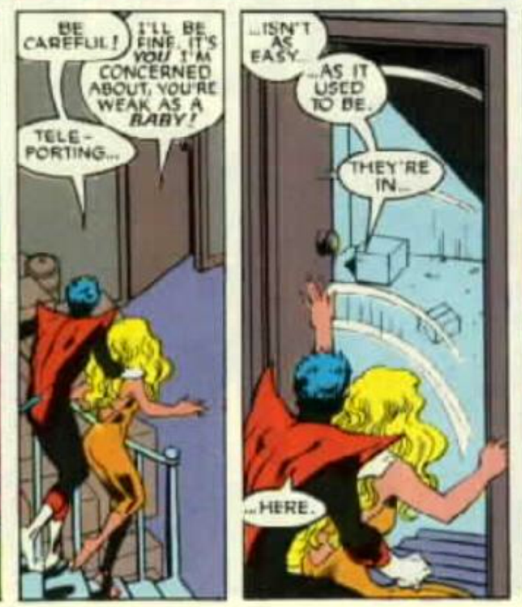 I Love the 80sKitty quotes Batman, saying that criminals are "a cowardly, superstitious lot." 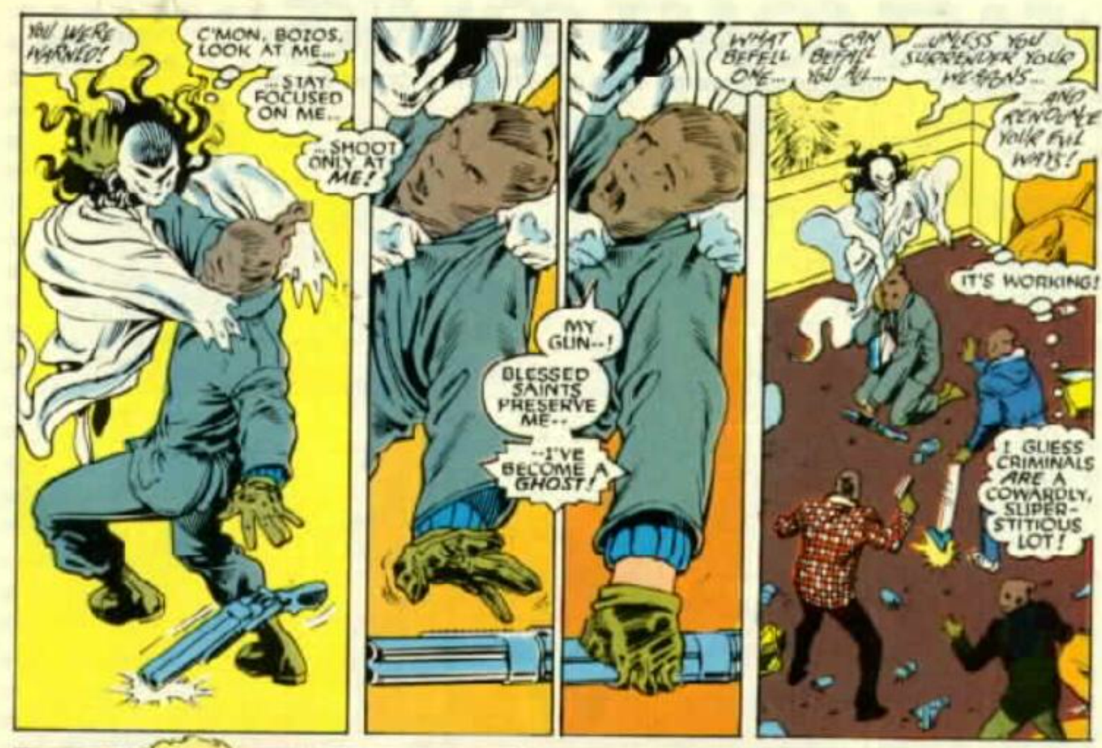 Meggan continues to watch lots of TV, and references Dynasty at one point. 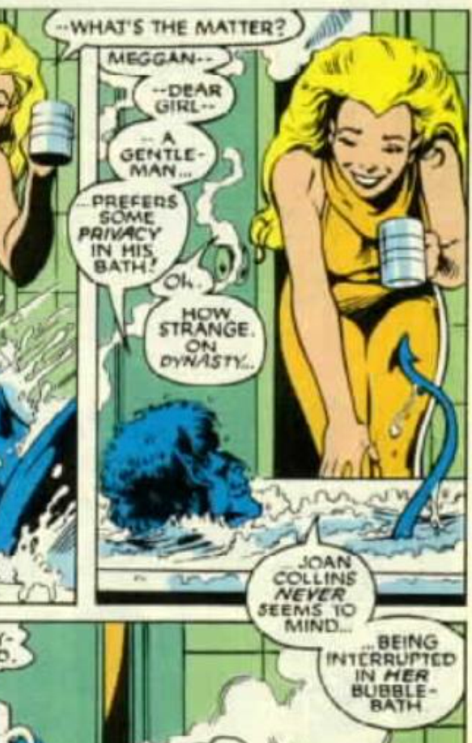 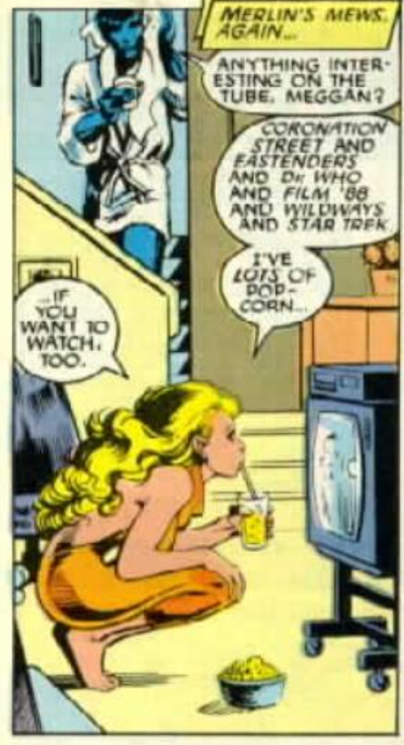 Teebore's Take
Even though this is technically a first issue, it reads very much like a second issue (or, at least, a continuation of an existing series). Of course, this really is the second issue of the story, with the decision of the characters to stay together as Excalibur having already occurred in a previous #1, and even the main plot of this issue (the hunt for the Warwolves) carries over from that issue. Add to that the fact that all of the main characters are existing, well-developed characters from other series (New Mutants avoided this problem by featuring mostly brand new characters, while X-Factor had the reborn Jean as a POV character and the novelty of reuniting the original X-Men after over a decade apart), and this issue really feels less like the start of something new than the continuation of something old.

Which isn't necessarily a bad thing. There's definitely a feeling of reuniting with old friends, especially when it comes to Nightcrawler and Kitty (and, to a much lesser extent, Rachel), while Captain Britain and Meggan are probably unknown enough to American readers to feel like new characters. And Alan Davis art is always a treat. It's just a shame that, given that #1 on the cover, more of an effort isn't made to establish the narrative or thematic purpose of the book, or its tone. That should come, in time, but for now, this issue feels more like a work-already-in-progress than the start of something new.