So in addition to what I write about below, I also watched some other stuff (like Glee, HIMYM, Community and Parks and Rec), but since I'm going to be out of town most of next week for work (and thus unable to watch much TV), I'm going to hold those to help flesh out next week's post. Anyways, here's thoughts on what I did watch and bother to write about.

The Simpsons: A Totally Fun Thing Bart Will Never Do Again 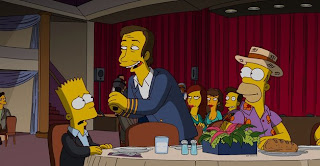 Maybe it's just because I could relate to Bart's angst regarding his vacation, but I really enjoyed this episode. I more or less spent a good chunk of every vacation doing my best to not think about how many days are left before I have to go back to real life, so Bart's realization that the super awesome cruise he was on would probably be the highlight of his life struck home. Along the way, there were plenty of laughs as well, first from the insane activities on the cruise and then in watching society on the cruise break down. The ending even did a nice job of resolving Bart's fears without belittling them (he wasn't wrong, but older Bart had simply learned to treasure the variety of good memories that occurred along with the drudgery of real life), and was touching without being overly sappy.

Marge: There is no Mrs. Steak! Who could stay married to such a man? 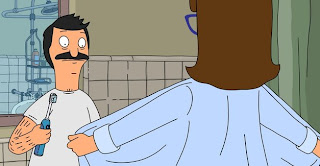 One of the great things about this show is the way it often subverts expected sitcom cliches. One of the reasons I didn't enjoy the last episode as much is that most of the story beats were too predictable. Here, after setting up what appears to be a sitcom-standard "male character keeps secret from his wife even though she'd probably understand if he just explained it" plot, the episode takes a sharp turn into romantic farce thanks to Linda's unique perspective on things. Instead of falling into the sitcom trap, Bob fesses up immediately after he druggedly kisses Linda's sister, and Linda, instead of being outraged or even understanding, encourages it. What followed was a litany of great scenes in which Bob, Linda, Gail, Dr. Yap and Tina all tried to woo and/or avoid romantic entanglements, much to all parties' growing confusion (I especially loved Bob's sheer befuddlement when Linda suddenly decided she didn't want him kissing her sister) and tons of laughs.

Other Thoughts
Meanwhile, Gene and Louise got to headline the B-plot with an increasingly-humorous series of challenges over possession of a jawbreaker, resulting in classic Bob's Burgers hijinks. 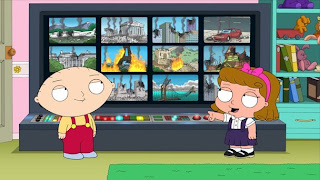 I really feel like I should have liked this episode more. Brian and Stewie pairings are always reliable, and the idea of Stewie meeting his match in a female version of his earlier super-villain characterization is rife with comedic potential, especially when it turns out she's willing to take things further than Stewie ever was. Yet I still walked away disappointed, feeling like the Stewie/Penelope interactions weren't as good as they could of been (I did, however, enjoy their final fight scene. Family Guy is really quite good at staging animated fight sequences). Maybe I just wasn't in the right mind set for this episode; something tells me I'll enjoy it more when I catch the inevitable re-run on Cartoon Network someday.

Other Thoughts
Maybe part of my problem with this episode stems from the fact that the B-plot, which can usually help bail out a lackluster A-plot (not that this A plot was lackluster), was pretty weak. Peter and Lois get 50s sitcom beds, Peter and Quagmire cuddle, then they don't. Nothing too exciting or hilarious there.

I loved Stewie using the spray bottle on Brian at the reading to keep him in check. Also, Peter's quill pen cutaway was pretty great.


Once Upon a Time: The Stranger 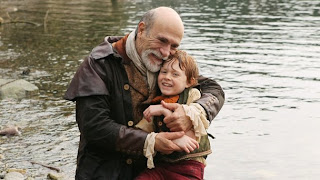 Not surprisingly, one of the most mythology-heavy episodes of the show thus far (really, only the pilot beats it) also turns out to be one of the best, as we finally learn Mysterious Sexy Writer's identity and someone finally does everything in their power to make Emma accept the truth. A lot of people had speculated that MSW was Pinocchio, so learning that in this episode was more a confirmation than a reveal (especially after last week's fakeout), but the material between Geppeto and Pinocchio (and especially Gus and August at the end) was strong enough that it didn't need a shocking revelation to succeed.

The fairyback also returned us to events of the pilot, serving almost as a "secret history" for what happened as Regina's curse went into effect, offering up an effective explanation for MSW's knowledge of FTL while also doing a lot to deepen both his and Emma's characters. But once again, the ending is a let down, as Emma, still refusing to accept her destiny, leaves town with Henry. Possibly because we're so close to the finale, or possibly because the hero rejecting their destiny only to be forced to reluctantly accept it is a pretty standard part of the hero's journey, but this time, at least, her refusal to believe felt like the final straw. Maybe it's wishful thinking, but I feel like Emma's departure from Storybrooke is going to trigger something that, once and for all, will force her to accept the truth about Storybrooke.

Other Thoughts
As frustrating (and narratively convenient) as Emma's continued denial is, this episode at least offered up a plausible explanation for it. Apparently the curse is strong enough to alter what Emma sees, so even MSW's wooden leg can't force her to believe.

The less said about the "Regina seduces David" plot the better, though thankfully David didn't fall for it.


Game of Thrones: Ghosts of Harrenhal 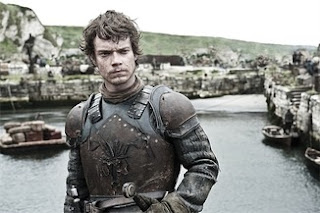 I'll say this for Game of Thrones: they sure aren't afraid to bury the lead, beginning this episode with what could have served as a great episode-ending cliffhanger. So let's start there.

Renly's Camp
So Melisandre's smoke baby wastes no time in slipping into camp and killing Renly. This was perhaps the most shocking moment of the series for me (I knew Ned died long before I watched the first season). As I mentioned last week, Renly was getting too cocky for his own good (zing!), so some kind of fall felt inevitable, but I never expected him to die so suddenly.

In the wake of his death, Stannis becomes the king to beat, more or less inheriting Renly's massive army. Margaery is seemingly adrift, but her loaded conversation with Baelish suggests there's more to come from her story (and continued to show off her pragmatism), while Caetlyn and Brienne strike up an interesting partnership. I'm especially curious to see where that goes.

King's Landing
Meanwhile, Tyrion sees first hand the public's growing discontent for Joffrey's rule (I love that he was offended that the street preacher ridiculed him as much as the rest of his family) while he does his best to secure King's Landing. While I definitely want to see Joffrey deposed, I'm intrigued to see how Tyrion intends to use Wildfire against Stannis, since he definitely seems to agree with Bron that launching it from catapults is a bad idea.

Harrenhal
Arya continues to shine, as the scene between her and Tywin was one of the series' best. His quizzing her on the sigils of the house she claimed to be from was a nice callback to the early season one episode in which she protested learning such things, while her stark (see what I did there?) declaration that "anyone can die" was a fantastic snapshot of her current sensibilities. I'm still a little unclear as to who exactly the men she saved during the Lannister attack are, but Arya having the power of life and death over two more people is intriguing, to say the least, and I hope we learn more about her benefactor.

Pyke/Winterfell
Odds of Theon rejecting his blood family for the Starks seem increasingly slim, as he's launched an attack on a village close to Winterfell, forcing Bran to dispatch troops to that area. Meanwhile, I'd always assumed that Bran's visions of the three-eyed raven were an indication of his "sight beyond sight", but Osha's reluctance to explain it to him suggests something more ominous (as does his dream of Winterfell flooding, which I'm fairly certain ties into Theon's attack somehow).

North of the Wall
Perhaps the best "north of the Wall" segment of the season, as we learn a little bit more about the history of Westeros as the Nights Watch camps out at the Fist of the First Men (well, the book readers probably knew it all already...). The cinematography in these scenes was gorgeous, and as a know-it-all booky-book myself, it was fun to see Sam show off.

Qarth
Daenrys finally receives a significant amount of screen time, exploring Qarth and meeting the Dean from Community before receiving a marriage proposal and the promise of an army. While her seeming rejection of the offer is probably sound, she's not wrong that Jorath's approach is too slow. If for no other reason than narrative expediency, I expect her to eventually, for good or bad, take someone up on their "raise an army and march to Westeros" offer. Still, Jorah's insistence that she deserves the throne because of both blood and bearing was spot on; of all the contenders for the throne, she probably is the most deserving at this point.

Other Thoughts
While things for Robb seemed to be looking up shortly before Renly's death, presumably Stannis has no intention of allying himself with the King of the North. Though I'm not sure how much that would bother Robb. Stannis was always whom Ned intended to inherit the throne, and I'm not convinced Robb wouldn't have a problem going back to simplyy being the lord of Winterfell were Stannis to capture the throne.

I can understand why Arya asked to have someone in Harrenhal killed with her first "wish", in order to make sure her benefactor could make good on his promise, why not start with the Mountain or even Tywin?
Newer Post Older Post Home
Posted by Austin Gorton at 12:00 PM