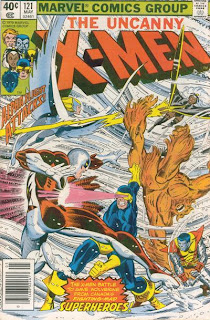 Plot
Cyclops, Colossus and Storm arrive at the Calgary Stampede Grounds, having tracked Vindicator's energy signature to the location. As they fan out, Cyclops recalls the X-Men's forced landing in Canada and the subsequent attack by Alpha Flight. Storm finds Nightcrawler and Wolverine bound in the center of the fairgrounds, but before the X-Men can free their teammates, Alpha Flight appears. Outside, Misty, Colleen and Banshee arrive, but are unable to enter due to Alpha Flight member Shaman casting a spell to keep out intruders. Inside, Vindicator tries to reason with Cyclops and allow the X-Men to leave without Wolverine, but a suspicious Colossus attacks Sasquatch and a fight soon erupts.

Wolverine and Nightcrawler, who were playing possum, quickly free themselves and join the fray. Storm takes to the skies to battle Snowbird, while Nightcrawler engages the speedster Aurora. Her brother Northstar attacks Cyclops and Vindicator brawls with Wolverine. When Shaman uses a spell to call up a great wind, it combines with the still-lingering snowstorm he used to ground the X-Men to create a massive blizzard that quickly grows out of control, threatening to rage well into the summer. Storm risks her life to bring it under control, then is sucker-punched by Northstar. An enraged Cyclops is ready to begin the battle anew, but Wolverine calls him off, unwilling to endanger his friends further. He leaves peacefully with Alpha Flight, and the X-Men's plane is escorted out of Canada. Once they reach American air space, the X-Men agree to turn around and go back for Wolverine, only to discover he's already escaped and is chatting with the pilot.

Firsts and Other Notables
Alpha Flight makes their first full appearance as a team, in costume. 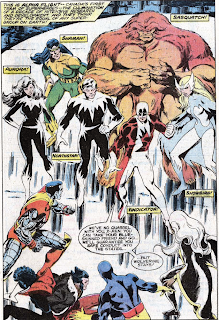 We are given one of our first references to Wolverine's pre-X-Men past, as it's revealed for the first time that Vindicator and his wife Heather once encountered a near feral Wolverine and helped restore his humanity. Later stories will establish that incident as occurring almost immediately after Wolverine underwent the process which gave him his adamantium skeleton. 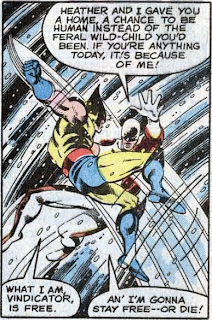 A Work in Progress
Colossus, fearing treachery, jumps the gun and attacks Alpha Flight as Cyclops and Vindicator are trying to come to a peaceful agreement, continuing his recent trend of fouling things up. 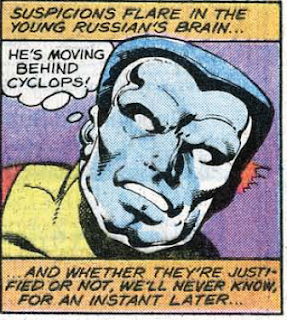 Nightcrawler gets his swashbucker on, teleporting in to kiss Aurora during their fight, then teleporting away again. 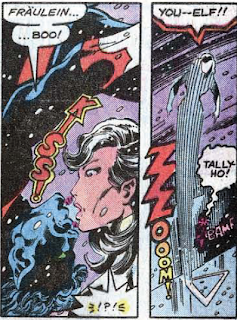 In a neat move, Storm uses the flexibility of the unstable molecules in her cape to entangle Snowbird. 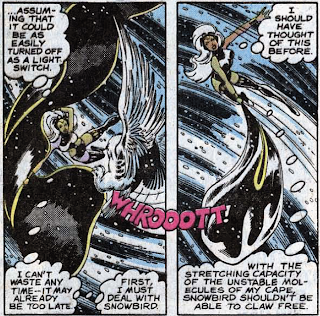 There's a nice role reversal here, as Wolverine must calm down a fighting-mad Cyclops in order to stop the fight with Alpha Flight.

The added pages in the Classic X-Men reprint detail lawyer Jeryn Hogarth's attempts to argue with the Canadian government on the X-Men's behalf (alluded to last issue but never shown originally). There are also pages which show first the Japanese ambassador going after the Canadians for attacking the superheroes who just saved Japan and then the American ambassador complaining about Shaman's out-of-control storm and how its affecting America. Finally, there is a page in which the aftermath of Wolverine's escape is shown, and the Canadian Prime Minister rescinds the capture order on Wolverine back, finding it more trouble than its worth (a condition which was originally made clear the next time the X-Men met Alpha Flight). 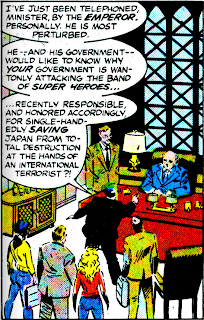 That 70s Comic
Shaman is Native American, so of course there's talk of "the white man" and the conflict between the modern and the traditional. Also, he attacks with animated, um, totems... 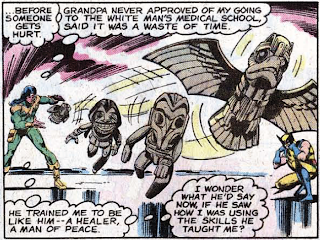 John Byrne appears at a restaurant ravaged by the out-of-control storm. 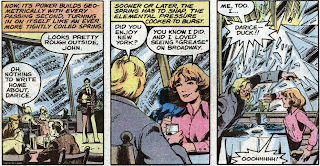 For Sale
Before VCR's: 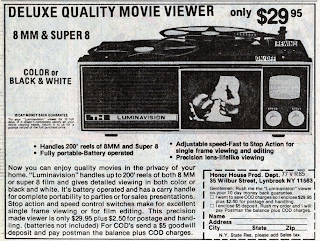 It's in the Mail
The editorial response to one of the letters in this issue basically apologizes for issue #115 spending so much time wrapping up an unfinished Ka-Zar plot. 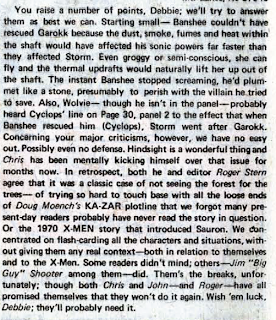 John Byrne on creating Alpha Flight
"I never really intended for Alpha Flight to get its own book...Even though most of them had been fan characters, they really only existed at that point in my mind as these guys who can fight the X-Men, as the guys who can survive a fight with the X-Men. That was really all the depth of character or personality they had. So when I came to do Alpha Flight, I spent most of my time shoe-horning in anything I could think of that would make them three-dimensional. That's how Northstar got to be gay. I was just looking for anything that would make them interesting characters."

Teebore's Take
If issue #119 was the first to show us how the X-Men have come to regard themselves as a family as much as a team, then this is the issue that makes it clear exactly what that means. Cyclops spends most of last issue and this one extremely pissed off at Alpha Flight for provoking this fight simply because they don't think Wolverine has the right to quit. He's willing to keep fighting, no matter what, to the point that Wolverine of all people has to be the voice of reason, because Wolverine is an X-Man now, and X-Men look after their own. Even more telling is the moment at the end of the issue, immediately after the X-Men's plane enters American air space. Cyclops orders the plane to turn around and makes clear his intention for the X-Men to go back for Wolverine, despite the long odds against them. No one disagrees. Despite Wolverine being perhaps the most irascible and unlikeable member of the team, the X-Men are willing to do whatever it takes to protect their own, a fact that has never been more clear.

Next Issue
It's been several months for them and eleven issues for us, but the X-Men finally return home.
Newer Post Older Post Home
Posted by Austin Gorton at 8:00 AM